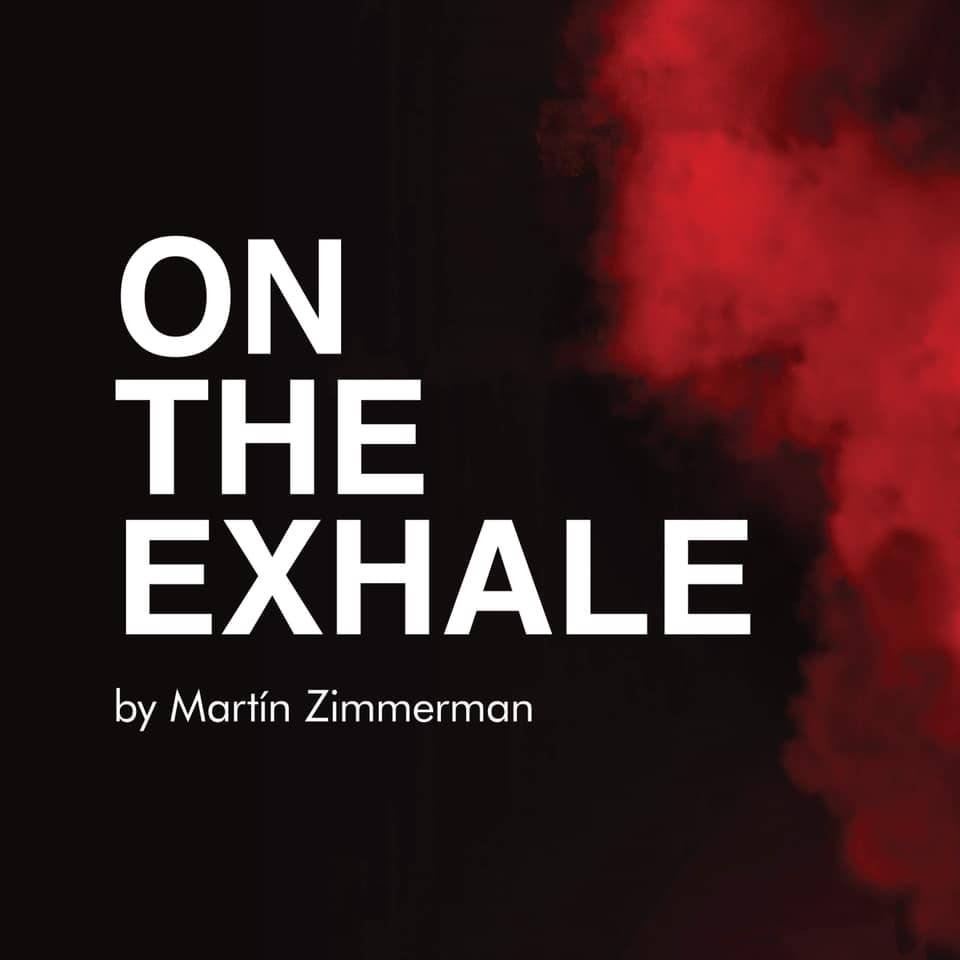 All live theatre could be considered a precarious endeavor. For actors and audience alike, that’s part of the fun. But the prospect of a show that relies on a single actor to tell its story—and to captivate its audience? That’s tricky.

For sure, the play would need a director and an actor who work well together and trust one another. Luckily, in the case of Twin City Theatre Company’s upcoming production of Martín Zimmerman’s On the Exhale, director Dustin Yocum and actor Kimmy Schofield have solid history upon which to draw.
I was able to speak with both Yocum and Schofield about the rehearsal process, the play itself, and why they think it matters. Here’s what they had to say.

Smile Politely: Let’s start with the most obvious question. Why did you want to direct this play?

Dustin Yocum: When I read this script, I immediately fell in love with it. It’s candid, honest, unsentimental. The narrative structure is in second person which is relatively unique in storytelling. Rather than allowing the audience to distance themselves from the story, this structure actually lays the content right in front of you and makes you face it head on. I’ve been hanging on to this play for a while and waiting for a theatre company to give it a chance. It’s not the kind of work you see in a community theatre often, so I’m appreciative that Twin City is affording me the opportunity to direct it.

Kimmy Schofield: Aside from the extreme relevance and importance of the subject matter regarding gun violence, Martín Zimmerman’s prose in this particular script is almost poetic, yet structured in a straightforward manner. His play is immediately captivating, which I don’t often find the first time I read through a script. I’m also coming off of a four-person show and a two-person show and I appreciated the challenge of doing a one-woman show. I’ve worked with Dustin Yocum, the director, before and love his style of directing. He is incredibly efficient and candid, which aligns well with the style of the script and my desire to try to perfect the role.

SP: It’s certainly a different kind of challenge, being the only actor on stage for the duration of a play. Has your approach, as an actor, changed?

Schofield: My approach, as an actor, has absolutely changed for this show. My general memorization process is to memorize lines at scheduled rehearsals, rather than working on my own, which is terrible to admit, but that’s how I have always done it. Even in the two previous shows I’ve done, I was able to rely on other actors’ lines to prompt my own or carry a scene. This is a one-woman show with no set, props, or other actors to drive it forward. I can only fall back on myself.

SP: Dustin, do you find that you use different “director muscles” when you’re focusing all of your attention on a single actor? Does it change your approach?

Yocum: More than I anticipated, actually. Going in, I wanted the process to be as organic as possible. Other shows I’ve worked on I have come into the first rehearsal with a clear and specific vision. With On the Exhale, I wanted to try something different, which was creating the vision in collaboration with the actor. All of the shows I’ve worked on have been about how characters relate to each other and their surroundings. This show differs in that the focus is on how the character relates to herself and her grief. It was a much different beast.

SP: I’ve seen what I think are your two most recent efforts: The Mountaintop (also featuring Ms. Schofield) for Twin City and HIR for the Station Theatre. Going from those to On the Exhale, do you see any discernible trajectory in your choice of plays? Are there certain things you look for in a script? (I say this knowing that directors don’t always choose the shows they direct.)

Yocum: I don’t know that I have a trajectory. Aside from the plays you mention, I directed The Glass Menagerie last year. So, I’ve done drama, comedy, a classic, newer works, edgier material, and now a solo show. I tend to gravitate toward works with darker or heavier themes, but honestly, I’m still in a bit of a feeling out phase, and I appreciate the variety. Though I’ve not directed anything of this nature, horror is a genre I’d really like to explore more on stage. I’m big into atmosphere and tension, which lend themselves well to horror. There seems to be a major deficiency of the genre in theatre however, and I’ve yet to find the right script.

SP: You’ve directed pretty steadily over the last few seasons, Dustin. Other than staying busy and building an impressive resume, what have you learned as a director? What compels you to keep doing it?

Yocum: I learn something new with each play. I’m still fairly new to directing, so I’m currently trying new approaches and soaking up as much as I can. That’s been a big part of the variety I’ve had in picking plays – I want to see what approach works best for me. What I’ve learned is that the best thing you can do is keep experimenting and trying new things. That’s essentially what compels me to keep going. I want to continue getting better and taking on more challenging works. When I first started, I read about ten books on directing, and I revisit some of them often. I also spent some time soaking up the processes of others. Now that I have a basic idea of what I’m doing, I’m just continuing to pick up new techniques and skills.<span 0.875em;”=””>

SP: What’s your favorite thing about the character you play in this show, Kimmy?

Schofield: My favorite thing about this character is her directness. She exudes so many emotions in the recounting of her journey-sorrow, frustration, love, vulnerability-but there is never a point where she yearns for sympathy, pity, or acclamation. She is unashamed to give herself to the audience in her exploration.

SP: And finally, Dustin, what would you like the audience to know going into the experience of On the Exhale? What do you hope they take away?

Yocum: As little as possible, preferably. I do think it’s important for the audience to understand that this is a non-traditional show. Aside from it being a one-woman play, part of the vision that Kimmy and I have created is focused on subtlety and restraint. As such, we decided early on to pull back as many of the usual theatre devices as possible and present this work in a raw form. This show puts you in an empty box with grief – sometimes the main character’s, other times the nation’s. There are no complex lighting changes, sound cues, props, etc. What that leaves you with is a one-on-one experience that can hopefully speak to some timely issues and engage the audience in a less traditional method. I hope this work inspires empathy and action in the audience and that they’ll forgive us for the lack of escapism this work instills.