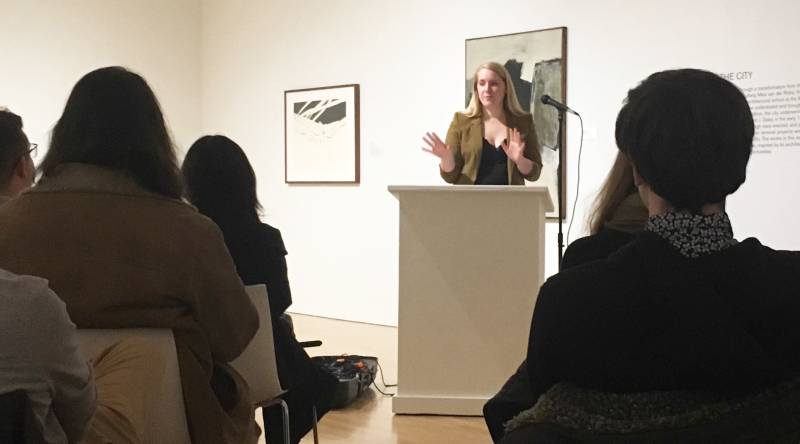 The night of February 7th the wind howled outdoors while tucked inside of the Krannert Art Museum three third-year University of Illinois Creative Writing MFA students shared their work in the first VOICE Reading series of 2019. The program included various genres and styles, providing the audience with an excerpt of a novel, poetry, creative non-fiction and short fiction. And with creative writing students at the helm, even the introductions were entertaining.

The event began with one of the readers, Liz Howey, introducing Amelia Hawkins. Diverging from the typical standard of achievements and platitudes, Howey’s introduction took the form of Twilight fan faction. Howey’s praise of Hawkins mimicked Bella’s adoring descriptions of Edward.

With references to fellow students, I was not in on all of the jokes. But it was nonetheless one of the best introductions I have witnessed, and it clearly set the tone for the evening. As people had filed in, many greeted one another. It was clear that the audience was comprised of many fellow students and faculty there to support the readers. Even as an outsider, the atmosphere remained welcoming.

Amelia Hawkins kicked things off with an excerpt from her novel, which follows two women, a reality television star in her mid-forties and the college student who comes to idolize her. The excerpt detailed the younger woman meeting her future best friend. It seemed that many of the audience members may have been more familiar with the novel-in-progress, and a few more details may have helped me to ascertain how the excerpt fit into the work as a whole. However, the excerpt was still able to be enjoyed on its own.

Hawkins was able to seamlessly insert details of various senses, from the sound of urine hitting a dumpster, and the smell of a party, to the taste of champagne, the short excerpt  fleshed out the experience of following the character around the city to a cramped apartment party. As the character exited the small abode, saturated with the smell of sweat, her relief was palpable as she came out to the balcony, where she spoke to the hostess of the party. The piece provided a lot of introspection, a glimpse into the thoughts of a young woman trying to establish herself.

Next, Ben Miller was introduced by a fellow student with an overview of the Wikipedia page for the disambiguation of Ben Miller. The humorous introduction provided a contrast to his poetry, which had a quiet and nuanced quality. Many of his poems took small moments or details, and with the use of metaphor and descriptive language made these mundanities into something worth knowing, something that the audience could latch onto and turn over, inspect, and carry with them.

Some of his poems might be further enjoyed in physical form, where the reader can inspect the words, punctuation, breaks, and form. One of his poems, “Explanation of Benefits” was formatted in the style of an insurance form, and for me, challenged the inhumanity of insurance companies. It explored the person and personal of the insured. Another poem, “Poem Without An Immunity Idol” used game play from the television show Survivor to explore the idea of tomorrow. In this poem, both an immunity idol and putting leftovers into Tupperware for tomorrow was a promise of another day, and another day was both a burden and an opportunity.

The last reader was Liz Howey, who in melodic tones first shared a piece of creative nonfiction. The piece was centered around a tornado that went through her town, and her mother’s cancer treatment. For both, there was the question of the futility of seeking solace from dangers, whether that be in the safety of a windowless room, or quitting cigarettes. Howey examined the devastation that nature can deal out, ravaging a local shopping mall, and the effects of illness on an individual.

Liz Howey then ended the night by sharing a piece of short fiction, which she quipped can often be more personal than creative nonfiction. In it, a Tinder swipe turned intimate, and the narrator grappled with issues of body image. During coitus, the narrator finds herself able to mold her body, trying to match herself to the other woman. The partner seems to not react to this happening, leaving the audience to decide if this sculpting is occurring outside of or only within the narrator’s head.

Events at the Krannert Art Museum are always enjoyable. If you get there early, there is the option of taking a walk around and enjoying the various exhibits. VOICE Reading Series offers a chance to witness writers that come out of the Creative Writing MFA program here at the University of Illinois, as they share their original works. VOICE Reading Series will continue throughout the semester, so there will be more chances to learn what talents are emerging at University of Illinois.