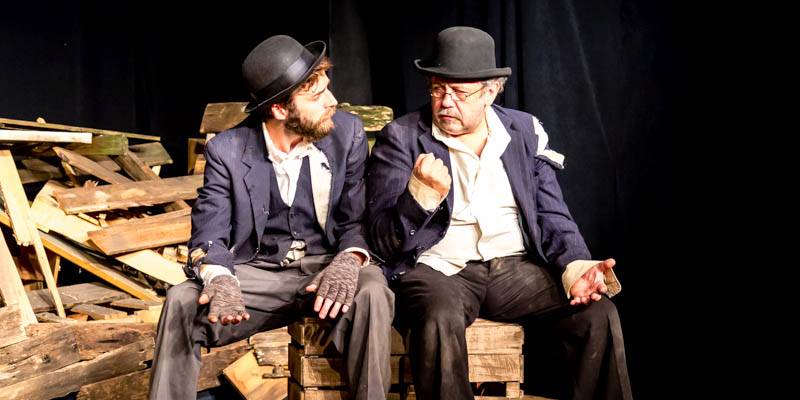 Vivian Mercier, an Irish literary critic, once described Waiting for Godot by Samuel Beckett as a “two act play in which nothing happens twice.” Those unfamiliar with the play might wonder how exactly that’s possible. Those who know the play may recognize the truth in that statement, as well as the prominent role Waiting for Godot has in shaping theater as we know it today.

As far as a literal plot summary goes: Yes, nothing happens. Two men, Vladimir and Estragon, wait for a man named Godot to arrive, but he never does. They are briefly visited by an odd pair named Pozzo and Lucky. The second act is the same.

But the play is so much more than that. It mixes comedy with tragedy, intertwining slapstick humor with absurd ramblings that occasionally touch on the very meaning of life and human existence.

Many have interpreted their waiting as representing mankind’s futile search for meaning in life.

Others argue it’s a search for God, as changing the pronunciation of Godot from “guh-doe” to “God-oh” could change the entire meaning of the play.

Some also argue that we’re not meant to understand or know what the play means, or as Alan Scott says, “Here [is] a play with an accessible comedy, but with an impenetrable meaning…” As such, the play can often be quite a creative undertaking. This production handled it skillfully.

Twin City Theatre Company’s production of Waiting for Godot, directed by Jace Jamison, takes place at the SoDo theater, which can be a very intimate space, as the small stage is just an arm’s length away from the first row. This production clearly took advantage of that, paying particular attention to details in production elements, which I greatly appreciated. The minimalist set, designed by Jamison, consisted of a small barren tree in the back and a pile of discarded wood with some recognizable pieces, like half a door leaning up against the rest of the pile. You couldn’t help but wonder where these pieces came from, much in the same way you wondered where these characters came from. Additionally, the floor was covered in dirt that got kicked up with every step and covered the actors’ costumes. After a particularly active rumble, you could actually see the dust in the air. It was a simple, but impactful effect.

The costumes were similarly detailed. Estragon and Vladimir both wore dark blue and black tattered suits that looked properly lived in and dirtied, as opposed to new clothes meant to look that way. Pozzo wore an impeccable tweed suit with leather brown riding boots, which clearly differentiated himself from the rags of the others and his servant, Lucky. Because of the sheer proximity of the audience to the cast, one could really take in the details designers Thom Schnarre and Sheri Doyle put in. My particular favorite? One of Lucky’s toes was poking through on his left shoe.

The cast also clearly put in a great amount of work. I found Nick Strole’s performance as Estragon to be the best of the night. He brought much energy and whimsy, creating an endearing and lovable “Gogo.” One of my favorite moments was in the middle of the first act, when Estragon wanders over to Lucky, while Pozzo and Vladimir discuss something. Still having not received an answer as to why Lucky never puts down the bags he carries, Estragon pulls on one of his bags, sees that he won’t let go, and drops his hand, which swings back and forth. Amused, he proceeds to do this with the other arm, so that both are now swinging in opposition. He laughs and is amazed by it, looking to see if Vladimir has seen what he has done. It’s charming and funny; I heard more than a few chuckles in the audience, so I’m not the only one who enjoyed this simple, small moment in the background.

His counterpart Kevin Paul Wickart played a much more serious Vladimir. While Estragon was struggling with his shoes or munching on a carrot, Vladimir was often deep in thought, pondering a variety of topics and desperately searching for some kind of answer. But I found he rarely, if ever, let up from that search, taking each moment in what is a funny, sometimes eccentric play, so seriously.

These two men played well off each other, but I think their characters really came to life when, together, they could play off Pozzo, played by Jon Faw, and Lucky, played by John Tilford. I found Faw to be excellent in some moments, and in others almost unsure or uncertain of himself. I also found his Pozzo to be different from other productions I’ve seen, which have chosen to portray his character as larger than life, an almost egotistical weirdo. Faw, instead, brought a bit of vulnerability to the character. His monologue late in the second act, an outburst in response to the others’ incessant questions about time, was touching and drove home one of the main points of the play very well.

Tilford was also fairly successful. The role of Lucky can often be very physically demanding as the character not only rarely speaks, but is also described as panting, slobbering, and pushed past the point of exhaustion. Tilford managed this well, hunched over and rocking back and forth. His infamous monologue, a lengthy outburst of nonsense after being ordered to “think,” started strong but lost its way somewhere. What should be an absolute deluge of words became rather measured, as if he was searching for what to say next. Perhaps this was intentional, showcasing Lucky’s inability to actually think? In all honesty, it read like an actor struggling with his lines.

Altogether, though, this was a strong production of an absurdist classic. If anything, I just wish it had been more absurd, more whimsical, and sometimes moved a bit quicker. Chunks of the dialogue of the play are meant to be quick and quippy, bursts of ideas or jokes between long periods of silence and waiting. This production never quite got that, instead moving at one steady pace throughout. Perhaps this was done in order to reflect the long, steady wait for Godot. Regardless, the production successfully drove home the main themes of the play and left room for the audience members to decide what it all meant.

Waiting for Godot runs October 5–8 and 12–15 at Sodo Theatre. Ticket prices and showtimes can be found on the Twin City Squared website.

All photos by Scott Wells.