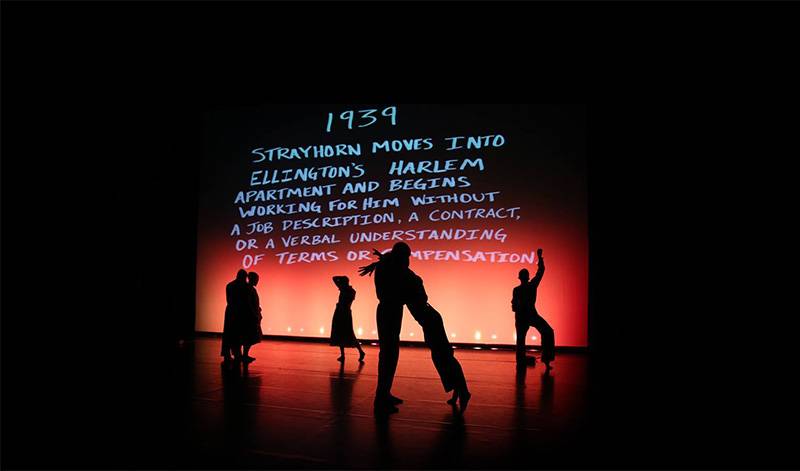 David Roussève/Reality: Halfway to Dawn is coming to Krannert this Friday to change everything you thought you knew about contemporary dance. It will also likely change everything you thought you knew about compose/activist Billy Strayhorn and his legacy. The moment this show hit my radar I knew it would be a perfect pick for this month’s list of must-see arts events. Now let’s talk about why.

Herewith find seven things you need to know about David Roussève/Reality: Halfway to Dawn, including why you won’t want to miss it.

Roussève is a multi-hyphenate, major award-winning creator with a vision that straddles arts and social justice. Dancer/choreographer/filmmaker and educator, Roussève is a magna cum laude graduate of Princeton University and a Guggenheim Fellow.  He’s won a Bessie, a Creative Capital Fellowship and he’s been on the faculty at Princeton, Columbia College, and UCLA, where he’s also served as associate, acting, and interim dean. He’s a big picture thinker and he’s not afraid to take on big issues. His 2016 work, “Enough?” asks the big question of “whether dance can even begin to address social issues like Black Lives Matter.  It went on to be performed in LA in 2018. And speaking of vision, Roussève brings the dual lens of choreographer and filmmaker to his work.

Roussève founded REALITY in 1988 with the goal of creating “evening-length expressionistic dance/theater works that combine the accessibility, grit and passion of African American traditional and pop cultures with the challenging compositional structures of avant-garde dance and theater to explore socially-charged, immensely relevant, and often spiritual themes.” REALITY pushes the bounds of dance’s traditional role. “Steeped in the power of storytelling and moving freely between wild humor and harsh reality, the work of REALITY braids words, movement, and elaborate visual imagery into a compositional framework that is ‘reinvented’ to meet the demands of each piece.” REALITY has taken its revolutionary approach to contemporary dance across the globe.

REALITY remains committed to “building an informed and involved public audience for contemporary performance.” The company is dedicated to sharing “educational and engagement activities with communities including women, at-risk youth, African American, and people with HIV/AIDS.”

You know I love a multidisciplinary performance and Halfway to Dawn is that and more. Strayhorn’s story, particularly his struggles as a gay black man in the 1930s, haunt us today. Halfway to Dawn blends the music with the larger social justice issues by taking us inside Strayhorn’s world with words from his biography, Lush Life, written by David Hajdu.

“Halfway to Dawn creates an abstract portrait by layering video-projected text conveying the biographical facts of Strayhorn’s life, projected abstract video art exploring the emotional undercurrents of his journey, and expressionistic physical theater expanding the political urgency of his narrative into our own lives.  Moveable screens are surfaces for the projection of historical footage that grounds the work in the Strayhorn era, even while lighting design moves the piece fluidly between past, present, and fantasy.”

To sit in the Colwell Playhouse and experience some of Strayhorn’s best music is reason enough to go. You may recognize Strayhorn’s name from his time as Duke Ellington’s arranger and writing partner. You’ll enjoy treasures like “Take the A-Train,” “After All, ” “Your Love Has Faded,” “Lush Life, “and “Love Came.”

With Ellington, Strayhorn wrote “Jump for Joy,” a ground-breaking musical that featured an all-black cast and offered a satirical critique of racism. Later he and Ellignton wrote “My People,” which was performed by the Ellington Orchestra at the 1963 Negro Exposition in Chicago, where it was dedicated to Dr. Martin Luther King, Jr.

Whether you’re a fan of dance, music, or biographies of brave and bold creatives/activists, you are sure to find joy and inspiration in this performance. You’ll also likely find inspiration in this immersive mashup approach to storytelling that promises both an intellectual and emotional experience.

With their strong social justice mission, Roussève/REALITY will surely take us deep into Strayhorn’s story, guiding us up to the highest highs and dropping up us down into the lowest of lows. Come prepared.  Come prepared to open your heart and your mind to the music, the movement, and the meaning of Strayhorn’s story.  Allow yourself to understand and experience his struggles, even for just a moment. Be open to transformation.

Last, but certainly not least, we owe a big debt of gratitude to Krannert Center for the Performing Arts for co-comissioning this important work. We are so lucky to have Roussève/REALITY here to celebrate KCPA’s 50th anniversary season, and to remind us of the power of art to transform struggle into beauty, and to bring understanding through the power of shared stories.