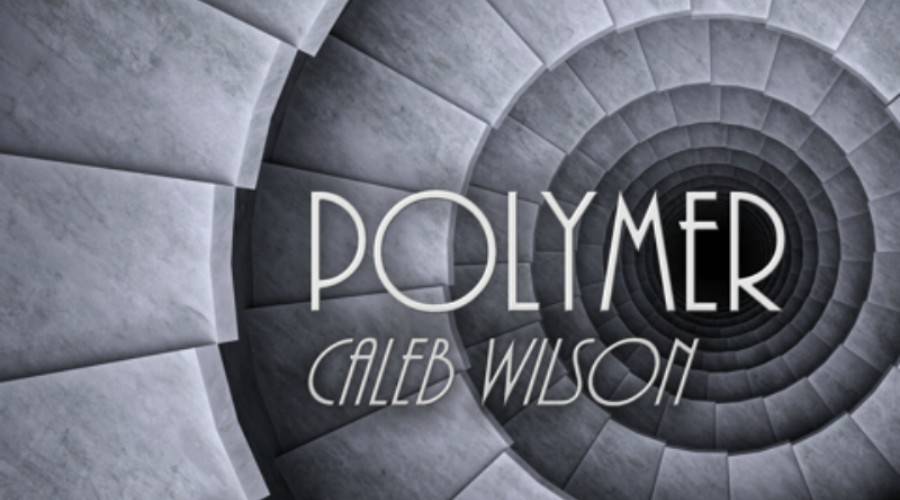 Bizarro is “the genre of the weird” according to Caleb Wilson, a local author whose new novella Polymer has just been released. But in my opinion the word “weird” doesn’t even do it justice. I suppose I can’t speak for the entire genre, but having read Polymer, I can safely say that it is also funny and and thought provoking and, in some ways, lovely. It can be harsh and confusing at times, but it also has an exciting action-adventure feel to it. It is many things. It is also weird.

Wilson’s novella follows an uber-famous monster hunter Polymer, and I do mean follows, as it is told through the perspective of Polymer’s fans — all of them — as they basically hunt Polymer himself. This unique narration results in a morphing, changing, nearly omnipresent “we” that observes almost all that Polymer does. Interestingly, it is an almost subtle element. When I read it, I spent the first few chapters trying to get a hold on this world of monster hunting, and it wasn’t until I was really in it that I started to notice this “we” character. Once I finally got it, it became my favorite element of the book. I personally haven’t seen anything like it before, and I think Wilson handles it with elegance.

Overall, I enjoyed reading Polymer, and I do consider it my “cup of tea,” so to speak. I enjoy a book that you have to work through to “get.” But I do have to be clear: this book is not going to be for everyone. This book is for people interested in a new narrative, a new point of view, a new setting. It’s for someone interested in reading something that is unlike most of what they have read before. Because, yea, it’s still pretty weird.

Last week I actually got the chance to speak with Caleb Wilson about his expereince in Champaign Urbana, Polymer, and this genre of the weird.

Smile Politely: Did you grow up around here?

Wilson: Nope. But I’ve lived here about ten years. My wife and I moved here. I was at one point thinking about going to grad school here and getting my MFA in Creative Writing. And something went wrong with my application the first year, and then I never bothered to apply again. But I really like living here. We lived in Nashville before this, which is much bigger and busier, but I just like the smaller size of this. It’s good, I like it.

SP: How did get into writing?

Wilson: Probably in high school, I took really good, really fun workshopping classes in high school. And then in college, I didn’t study English or writing, but I just happened to take a writing workshop that was my favorite class. I took it when I was a senior, and if I had taken it any earlier I probably wouldn’t have dared to, but the teacher was very anti-genre writing and anything fantasy or the stuff I write, but then by that point I didn’t really care, so I just would write any kind of weird stuff I felt like.

SP: Ok, so you’ve always been writing more off the cuff, weird things? How did you get drawn to that genre?

WIlson: Yea, I have. I just have always liked to read weird, oddball stuff. Right now, I work at the Urbana Free Library and before that when I first moved here I worked at—you know the book store Pages for All Ages? I worked there. Until the week before it closed, when I happened to get a job at the library. But I’ve always liked searching out odd books and finding interesting things to read.

SP: So you’ve worked at the bookstore and the library, and you’re writing. Do you write other things? Do you consider yourself a writer primarily?

Wilson: Well, I work part time at the library. And the other time I write. I also make video games, so those are the biggest official projects I’ve had. I spent a couple of years writing a video game for a company that was sort of as much effort as writing a long novel. It’s like almost 100,000 words. It took me two years. I like doing it because it’s involves writing, and I like programming too, and that’s sort of both of those things.

SP: Wow, so when you “write a video game,” what does that mean?

SP: That’s got to be a lot then, writing every choice they could make. Do you think writing these games influences your personal creative writing projects?

Wilson: Yea, so the way the games work is, you know, they describe what you see in second person. I don’t really write fiction in second person, because almost everyone seems to hate that. But they are very much about describing things and describing rooms and objects. So I think I use that in my writing. I really like describing interesting settings and crazy settings.

Smile Politely: I have to admit, I read Polymer before I knew that about you, and it totally makes sense. I did get a sort of video game vibe from it. How did you get it started Polymer as project?

Wilson: The first thing that got me started on it really was the desire to make a match up of two completely different things. When I started writing that or a little before I had started writing it, Prince had just died. And so I wanted to do something that involved that. So then I just had this idea that popped into my head mixing Purple Rain with monster hunting and video games and I just ran with that idea.

SP: Yea, that’s a really interesting starting point. What was the process like then?

Wilson: Well there’s a guy I know who’s in the bizarro writing community name Garrett Cook. He’s the editor of the series. And he’s really good at getting people and being welcoming with people in that community. So I took a workshop, an online workshop, where we were going to write a novella in a month. And that’s what I wrote. I started by pitching the idea to him, that was the one he was most interested in, and then, basically, I just sat down and wrote it in a month.

SP: So the bizarro community that you’re a part of, how did you find out about that?

Wilson: The big publisher, my publisher, Eraserhead, they’re in Portland, Oregon, which is sort of where the biggest concentration of bizarro writers are. There’s three or four presses that pretty much publish all of it. I sort of think of it as the writing version of punk. They’re like usually short, almost off the cuff a lot of the time. But the variety is pretty huge. Some of them are very well written. Some of them are more about a spectacle. I mean really, it’s all online. I would join certain Facebook groups, that’s how I met Garrett. The most fun thing is there’s a yearly, they’ve had it for like ten years, a yearly bizarro-con, which I went to last fall. It’s really really fun. It’s a get together of people who are into that sort of writing, the weirdest possible writing, and they get together for the weekend and do readings, do fun stuff.

SP: That sounds really cool! Did you do any readings or bring any of your own work?

Wilson: Yea, I read from this [Polymer]. So there’s six of us total in the New Bizarro Author Series. There were three of us there, and all three of us read from our things.

SP: So with Polymer, the narrative is actually being told from the perspective of a group people. How did that come up?

Wilson: The original draft that I wrote wasn’t like that. It just was regular third person. And it was basically just Polymer fighting monsters one after another, and it was terrible and really boring. Then I had the idea to sort of weave it together in a more interesting way. That’s where I put in a few things, like the newspaper articles. In my original version, there were no chapter breaks either, but Garrett, my editor, wanted to split it up into chapters, which is fine. But I wanted it to be this sort of single changing thing from the point of view of everyone who was a fan of Polymer.

SP: As I was reading it, it was one of the things that I found most intriguing. And I have to admit, I’m a really big fan. I love reading things like this, where you’re sort of asking yourself “What is going on?” the entire time.

Wilson: So that’s what Bizarro is really about. The best description is actually “Bizarro is like a genre of the weird.” You can actually write in any genre, it can be sort of fantasy like mine, or it can be very literary or horror. There’s always some weird, impossible aspect of it. So really, it’s a very broad genre. You can write pretty much anything.

SP: Do you think it’s a growing genre? Do you think people are going to know about it more? It seems very niche right now.

Wilson: There are publishers who are branching out and publishing and winning awards. I think it’s growing. It sort of doesn’t mind being niche though. It’s a very small community, that feels like a big family.

SP: Do you have anything to say to people who might see this genre as inaccessible in that it’s too weird? It can be very jarring, and I think there’s potentially people out there who might be turned off by it.

Wilson: I don’t have anything specific to say to them, but I think that’s totally fine. Because there’s so many types of books out there. And not everyone is going to like it. The thing that I like about this genre is that there are certain readers that this will be exactly what they’re looking for, and they haven’t found it anywhere else.