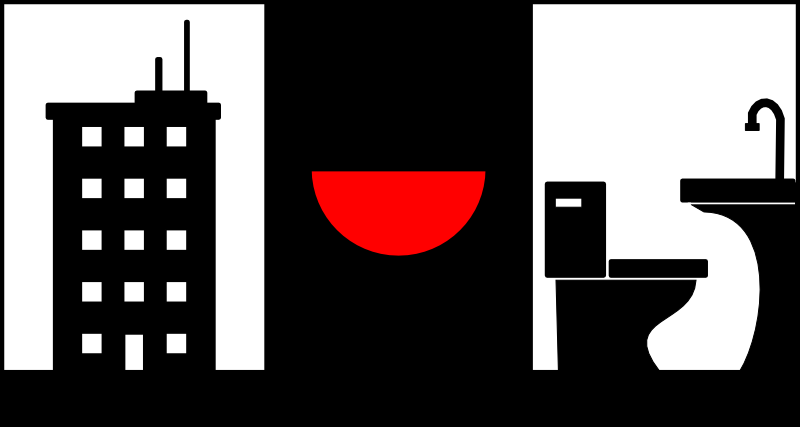 Smile Politely reviews a whole lot of things in C-U and the surrounding area, but some stuff still fall through the cracks. In an effort to close the review gap, SP proudly presents the first in a series known as A Building, A Feeling, and A Latrine. It’s pretty self explanatory, but I’ll break it down for you anyway. Each month, I’ll review a building in the C-U area and determine whether it is a beautiful local landmark, or a hideous eyesore that should be covered by a large tarp when visitors are in town. Second, I will assess a feeling that residents of C-U will be familiar with. Finally, I will visit a men’s restroom somewhere in the cities and critique the appliances and ambiance. Let’s get things started with…

The Quarters Apartments (aka, “that wacky yellow cube across from Escobar’s”)

I assume that everyone who has ever driven South on Neil through downtown Champaign has seen this structure for the first time and wondered if they’ve somehow wandered onto a movie set. Each separate face of this building looks like a plywood facade created to be part of the background in a period piece.

Taken as a whole, the building looks like an gargantuan block of Velveeta cheese that fell from orbit which enterprising locals have taken to living in. The only reasonable explanation I have for why this building looks the way it does is that the architects were forced to base their design off of a 3rd grader’s crayon drawing depicting what the ideal apartment building should look like (see below).

Alright, perhaps I am being a bit harsh on The Quarters (which I’m going to believe is named after the drinking game and not the fraction). The property manager’s website states that the building was inspired by, “19th Century urban mansions of the Dominican Republic, Puerto Rico, Cuba and other Caribbean nations.” I must admit that, while walking around The Quarters, I did have the feeling of being transported to somewhere vaguely exotic. Maybe it was all the whimsical details, like the white molding and the iron balcony rails, or maybe it was just the faint scent of food drifting over from Escobar’s, but I definitely didn’t feel like I was in Champaign Illinois. I’m not sure that’s really a good thing though. The Quarters simply doesn’t fit in well with the rest of Champaign’s modest skyline. That said, I’m sure the interior is super nice, but that’s not up for review here.

Picking up a carry out order from Black Dog

It’s no secret that most people in C-U totally love Black Dog Smoke & Ale House. Folks will gladly stand in line for hours and possibly days to partake in BD’s delicious meatiness. However, there is another way to get food from Black Dog, and that is by calling ahead and making a carry out order.

Picking up a carry out order from Black Dog is one of the greatest combinations of superiority and gluttony that a person can feel Champaign County (and possibly even the larger Central Illinois area). You get to walk past the hordes of people waiting in line. They gape in wonderment as you stroll through the door, past the Big List o’ Names, straight to the counter to pick up your order. They are angered at first by your hubris, but then they realize that they have nothing to blame but their own sloth and ignorance for not picking up the phone. Their feelings of shame as you walk back out the door are profound. Sure you can’t order a beer if you carry out, but that just means you have more money to buy a second entree, or perhaps a third. It’s carry out so nobody needs to know that it’s all for you. You continue to feel great as you walk out to your car. You sit down in your 2002 Honda Civic and pop open one of the bags just for a quick whiff.

Next thing you know, you’ve forgotten to even drive home and have instead eaten enough food to satiate three adult humans. Magical.

Of course, Black Dog now has a Champaign location that you can carry out from, but they aren’t yet open for sit down eating, so I recommend always carrying out from the Urbana location just to get that extra feeling of dominance over other patrons.

The totally new men’s room at the Blind Pig Brewery

Longtime readers of Smile Politely will recall that the other men’s rooms at the Blind Pig Brewery were reviewed in a series called The Dapper Crapper waaay back in January 2010. If you hadn’t heard though, BPB just opened a new expansion (leading some to question whether it can still rightly be nicknamed “The Piglet”), and with this new expansion comes a shiny new men’s restroom for me to review.

I gotta say, this bathroom is very nice. It’s quite spacious for a bathroom with a single toilet and a single urinal. All of the hardware is clean and effective. However, this bathroom is definitely lacking in character. Where’s the vandalism? Where’s the unidentifiable stains? Why, even the toilet paper is in an ergonomic place instead of hidden someplace interesting. The rest of the Blind Pig Brewery is warm, dark, and cozy. This bathroom is the opposite of those things.

Just take a look at this hand dryer:

Sure, it’s the only hand dryer in the whole bar that will actually dry your hands, but it looks downright sinister. It’s named the “XLERATOR” in a font that I’m pretty certain is only used for dystopian death robots.

VERDICT: I know that bar bathrooms require some time to get “worn in,” and I hope this one grows up to be a great place to take a drunken piss, but for right now, it’s just too sterile.

That’s all for this first installment of A Building, A Feeling, and A Latrine. If you have suggestions for edifices, emotions, or outhouses that I should take a look at, make them known in the comments below.