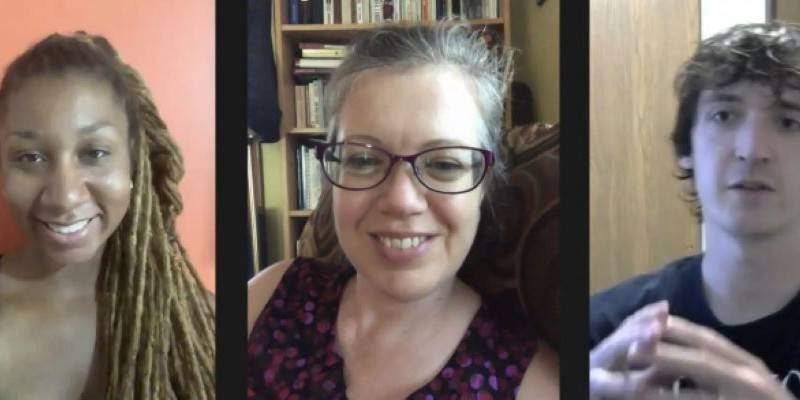 The word radical is all around, these days. Up, down and sideways, we’re in uncharted territory. I’d call it radical. Since March, dancing around a virus that’s challenging what it means to be human. It’s dangerous to breathe, to touch, to visit friends’ homes. Business as usual, isn’t.

While we’re reeling from that, on May 25th a police officer in Minneapolis betrayed the bit of himself that was human and knelt on the neck of a Black man until he was dead. Something about that radical incident at that radical moment ignited a spark in dry tinder. Now it’s a long-smoldering fire — long known to Black people but suddenly in focus for people of every color.

Let’s look at the word.

“Radical” defined: “Very different from the usual or traditional. Relating to or affecting the fundamental nature of something; far-reaching or thorough. Of or relating to the origin. Favoring extreme changes in existing views, habits, conditions, or institutions.”

Where did it come from? “Wrad” was the name for root or branch as long as 5000 years ago by Indo-Europeans on the steppes of Eastern Europe. That syllable forms the base of words across languages as far flung as Spanish, Gujarati, Russian, Persian, and English. The Latin radix, “going to the origin, essential,” gives us radical. It swerved political in the late 1700s, when the British Liberal Party named its platform Radical Reform. In the Roaring Twenties, clothes, behavior and lifestyles were dubbed radical. Surfers in the 1970s used it for the limits of control.

There are other angles in nearby places. I wandered through C-U and found some related roots that might shed light on what to do in radical times.

In the chemistry lab of Prof. Joaquin Rodriguez-Lopez, U of I grad student Kendrich Hatfield studies the tiniest of particles. Electrons make up the valence shell around the nucleus of a molecule; an unpaired electron gives it a negative charge and the name “radical.” It wants to neutralize that charge — to either gain or lose an electron. By nature, radicals are unstable and volatile. Inserting an electrode to agitate a pool of radicals sets up a flow of electrons, the electricity that can power most every invention of human ingenuity.

Hatfield studies how to store the energy generated by solar and wind power — the key to expanding our use of sustainable energy — potentially in huge batteries that operate on the same principle as a household lithium battery.

Direct the volatility of those radicals and it’s possible to generate the power to make some change.

* * *
Wander over to the Morrow Plot tucked between the Undergraduate Library and the Institute for Genomic Biology and ponder its radical roots. Yes, it’s a cornfield, but do you know how remarkable? In 1968 it was named a National Historic Landmark, as the oldest continuously cultivated experimental field in the Americas. Since 1876 researchers have studied its crops to gather data on the essential workings of roots, plant growth, soil, and more. The Undergraduate Library ended up underground so that it wouldn’t cast shade on those celebrated corn plants.

Farther south, the university has a field site called SoyFACE, where Duncan Martin, working toward a masters in plant biology, studies the interactive effects of ozone and drought stress in soybeans. He was kind enough to fill me in on the nature of radical in plant growth.
When a seed casing meets moisture in soil, the first bit of growth that emerges is the “radicle” – an embryonic root with a tip that contains starch-filled granules called statoliths. These move inside the growing root in response to gravity, directing it down into the soil. This anchors the expanding roots where they can absorb water and nutrients, and points the stem and leaves upward toward the sun.

This radicle orients a seed and anchors it for effective growth.

* * *
The natural world shares its insights on radical; what about the political?

A book is brewing in town, Democratize This! How to Make the World We Want, the inspiration of New Yorker Elizabeth Adams and Urbanian Danielle Chynoweth. She is Cunningham Township Supervisor, former Urbana City Councilwoman, co-founder of the Independent Media Center, and all around community activist. The book is a thoughtful and thorough analysis of where we find ourselves: “a defining moment in history when pandemic is raging, fascism is rising, and the ecology is collapsing.”

It defines the difference between premises and consequences, and whether “solutions” are mere bandaids for symptoms, or tackle the root causes. It leads readers through “the why game”: look at a problem from every angle and ask “Why.” Why wear a face mask? Why not? Why do people of color disproportionately die from Covid19? Why did George Floyd’s death evoke worldwide protest?

The book is a program to provide “strategy and tools to empower people from all walks of life to create a more just and desirable future for everyone. It helps explain root causes of problems and how systems work, and provides examples of successful projects for change.” It spotlights how to identify the contradictions between systems that oppress — facts that cannot coexist. The promise of equal rights under democracy; and the restriction of power to the few to maximize profits under capitalism.

Democratize This is both a radical root and a radical particle — it can anchor the tender root of this aroused awareness of racial inequity, and deliver the nutrients to feed the struggle. And it can harness the negative charges orbiting our world and direct their energy flow toward fundamental solutions.

There is radical analysis and there are radical solutions. Look at the work of local businesswomen and advocate Mariah Madison, well covered in Smile Politely, to identify the roots of economic disparities between Black communities and white.

To spotlight and promote Black-owned business, she developed Buy Black Chambana, now listing 150+ entries offering services from art, design, and media to consultants, contractors, and insurance to retail and transportation. The next time you need something, check the directory.

Madison knows well what it takes to start from scratch and succeed. Her Nannyville LLC provides dependable and quality childcare for short and long term needs. She knows the steps for building a successful business. She also knows that the applications for local COVID relief grants in C-U were not structured to fit most Black owned businesses.

Ask “why” at every disparity. Why are the paperwork and legal requirements for relief grants, particularly in Urbana, daunting and restrictive? Why do they exclude smaller businesses with fewer employees and smaller cash flow? Why do they require legal and financial formalities that may not be typical in Black owned businesses?

Madison was tired of asking why. Instead, she established a Black Owned Business Fund to fill the gap. It’s based on donations, at last count up to $12,000 and growing. Be part of the solution and contribute – either through Venmo and Cash App.

Here again, Madison is frustrated by barriers in the economic systems in place. She would like to make the business fund a non-profit foundation, but since the funds go to profit-making businesses, that’s prohibited. Why?

She is also vice president of the Champaign County Black Chamber of Commerce, where she expands the impact of networking. Its programs advise Black owned businesses on the steps to encourage success, with the guidelines 1) make connections; 2) provide a solution to some problem; and 3) persevere. She is working with the U of I’s Office of Procurement Diversity to increase their commitment for state contracts to the mandated 20% of the annual total required to be awarded to minority, women-owned, and persons of disability businesses.

What radical developments would Madison like to see over the horizon? She immediately mentioned the Black Teachers Alliance screening at Centennial High School of the film Pushout: The Criminalization of Black Girls in Schools. It brings to light another long-ignored systemic issue that isn’t recognized in public schools across America. If a problem is not seen, it can’t be addressed. Madison sees the need for persistent resistance in the face of all systemic injustice — knowing that resistance is radical. And it needs widespread awareness and support from all sides.

Business mentoring is another radical recommendation. It goes against the American model of competition and profit for established businesses to guide and support smaller ones, but it could change the business profile in Champaign-Urbana. Madison is frustrated that there isn’t a Black-owned printer in C-U; she takes her business to Chicago. She would like to see a large printer franchise and support a branch here under Black ownership. She suggests the model of a large bakery welcoming a startup, to show the way toward a licensed and profitable kitchen. Banks need to open their business loans to Black owned businesses, who are too often denied. Why?

Madison used to believe that personal relationships could overcome the disparities between Black and white experience in America. Now she focuses on economics. To put in practice her own advice, she makes connections, proposes solutions, and perseveres.

What might be a radical act for you? Pick a problem, any problem. Dig deep. Ask why. Look around you at the models in Champaign Urbana and join in.

Yes, this is an Abecedarian Amble, so it’s time to tip a hat to the letter R.

Its most likely model is the Phoenican letter rosh, meaning head — shaped like a backwards P. The Greeks adopted it in reverse, as they did with a number of letters. They added a leg and called it rho.

The Latin R was voiced with a trill, which evoked a growling dog — and so it was nicknamed the littera canina — in English, “the dog’s letter.”