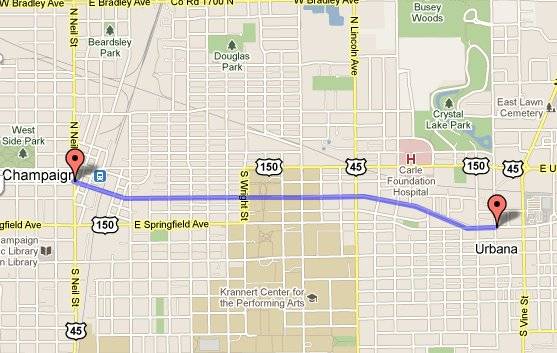 Perhaps this should be called Best (Overlooked) Culture. Before we even decided on our list of categories, we first agreed that longtime favorites, such as The Art Theater, the Krannert, Common Ground, Exile, Crane Alley, etc. would not be mentioned (and we’ve already blown that). We already know that these places consistently bring cultural excellence to our great cities.

No, this year we decided to shine a light on some overlooked gems that don’t get mentioned repeatedly, constantly, every week on this site. And since the definition of “Culture” is impossibly arbitrary, we’re sure we’ve missed some gems. Please feel free to point out any omissions in the comments, but try to be gentle. Tracy can take it, but Joel is easily reduced to tears.

By anyone’s standards, our first Pride Fest last year was a huge success, so it’s risky for me to choose it for our “overlooked” festival winner. However, in my conversations with most people about local events and festivals, only the usual suspects ever come up: Sweetcorn, Boneyard, Pygmalion, Elnora, Champaign Taste. To be fair, once I remind them that C-U has a Pride festival now, their reaction is the same: “Oh yeah! Pride Fest! When is that this year?”** So it’s a popular festival, but naturally, it’ll take a few years before it’s on everyone’s radar as a regular, yearly event.

Even if this year’s Best Culture wasn’t focusing on lesser-known local culture, Pride Fest would give the above listed festivals a run for their money, especially Sweetcorn and Champaign Taste. Pride Fest has something for everyone: music, dance, food, drink (and not just beer carts, people, actual alcohol), art, crafts, variety acts, and educational opportunities. Pride Fest offers entertainment and activities for both kids and adults. It’s free; it welcomes everyone; and it’s a hell of a lot of fun.

Pygmalion may be the best music festival in C-U, but Pride Fest wins for best overall (and — for now — overlooked) festival.

** The answer to this is August 20th, and the UP Center’s president, Kevin Johnson told me that “This year’s festival is guaranteed to be even bigger and better with more entertainment for everyone.” Hurrah!

Not a lot of people know that Champaign County has its own chapter of the ACLU, or that its headquarters are in Champaign. Until recently, I was one of them. I was aware that we have a student chapter on the U of I campus, but I’d always assumed that the civil rights legislation that gets passed in our state was solely due to work being done in Chicago, since the Illinois ACLU headquarters is based there.

But this isn’t true. Our local chapter puts in countless hours and energy — working closely with Chicago — fighting for first amendment rights, justice, and freedom in Illinois. And they’ve been doing it for 91 years. Indeed, Champaign County ACLU was at the front lines in the fight for civil unions and the abolition of the death penalty in Illinois — two huge wins this past year. We’re lucky to have them. They make Champaign-Urbana — and our state — a better and safer place in which to live. And they’re my choice for Best Advocacy Organization. Joel is wrong.

CCHCC does excellent work in several aspects of the C-U health care community, but in the past year they’ve really stood out for their tireless advocacy work on behalf of the 5th and Hill neighborhood. Recently, CCHCC took it upon themselves to locate an abandoned drain pipe from the former Illinois Power manufactured gas plant (which Ameren claimed didn’t exist) and which was still full of toxic and carcinogenic pollutants, likely leaching into the Boneyard Creek. Due to pressure from the group, the City of Champaign agreed to cap the pipe.

CCHCC has also been leaning on local government concerning a local ordinance which allows polluters to avoid cleanup of groundwater in areas adjacent to dirty sites — since people aren’t allowed to drill wells within city limits anyway, what’s the harm in groundwater pollution, especially in an impoverished neighborhood?

The Health Care Consumers, led by director Claudia Lennhoff, have continued to drag these uncomfortable issues — which the City of Champaign, the Illinois EPA, and Ameren, would just as soon keep out of sight — back into the public consciousness, and for that they should be commended.

UC Books to Prisoners does exactly what its name says: It provides books to Illinois citizens who are in the prison system. The organization is made up of volunteers whose main duties are to respond to book requests from inmates. They select books from their library of donated materials and then ship them to inmates all over Illinois. They also staff two lending libraries in the Champaign County jails. And they do this at no cost to the prisoners or tax payers.

Volunteers also coordinate book donations, fund raise (such as their fantastic book sales), and work on education and outreach projects.

You can check out their newsletter here.

Champaign-Urbana has many great libraries: Champaign Public Library (just ask the residents of Tolono!), Urbana Free Library, the University of Illinois Library (yes, this library is open to all C-U residents, not just students). And there are small, independent, reading libraries available in C-U if you know where to look: The U of I LGBT Resource Center, The UP Center, Cafe Kopi, and Caffe Paradiso, just to name a few off the top of my head.

The best overlooked library, however, is the UC Independent Media Center Library. The mission of this non-profit volunteer library is to “collect material that gives voice to those not portrayed in the mainstream/corporate media outlets” (website). And the Radical Librarians caring for this volunteer collective do a terrific job at this. They work hard at providing information to our community, and they also support the information needs of the IMC media itself.

On April 30th, they sponsored the first Midwest Zine Fest. I spoke with Chris Ritzo, one of the librarians involved in the fest, and he said that they “do plan to make Midwest Zine Fest an annual event, and welcome anyone interested in zines, print arts, and underrepresented voices in print and digital media to contact us.” For more information about this year’s festival, see Dylan Heath’s article here.

The library has a comfortable reading area and computers. And it’s not solely a reading library; it also lends materials to IMC members. It needs to be said, however, that the IMC Library gives collection priority to media that is published by small, independent presses and that helps enhance the work being done by the IMC as a whole. So, it’s probable that you won’t find bestsellers or Sacred Nation newsletter there (though it’s possible that you might find a book about Sacred Nation). But I could swear I once saw an issue of Oprah’s magazine on the shelves. Which confused me. But hey, it’s a library, right? There’s no such thing as walking into a library and not being repulsed by at least one of its holdings (nor should there be).

Funded by grants from the Knight Foundation, the Marajen Stevick Foundation, and the University of Illinois, C-U Citizen Access may strain the definition of “blog,” but it certainly deserves more local attention for its fine journalism. The two-year-old site is “devoted to coverage and discussion of social and economic issues within Champaign County.” At its best, C-U CA functions as a muckraking neighborhood newspaper, focusing an inquisitive light into some of the most impoverished corners of Champaign County.

Their work on housing issues has been tremendous, especially concerning the properties owned by the Ramos family in northern Champaign County. Any time that slumlords post a sign comparing you to vicious dogs, you know you’re doing something right. Also, Dan Petrella’s coverage of the 5th and Hill neighborhood is head-and-shoulders above anything else in town.

Other local blogs deserving mention (but who’ve already been featured on this site) include: The Sandwich Life, ChambanaMoms, Halfway Interesting, and Champaign Taste. And of course, the U-C Independent Media Center‘s site (and the print edition of the Public i) continue to raise the consciousness of the community.

Your mileage may vary, of course, but as a volunteer at The Bike Project, I interact with scores of people who’ve purchased their bikes locally, and these two shops consistently get the best marks. They also are undeniably a part of the communities in which they reside. Champaign Cycle owner Peter Davis is a visible member and supporter of the local bicycle advocacy community, and Dave Baker is a well-known figure in East Urbana.

Of course, the new/used divide isn’t a clean break, since Baker’s sells new bikes from Sun, Redline, and Origin-8, and Champaign Cycle had their annual used bike consignment sale to benefit Habitat for Humanity this past weekend, but hey, this classification is a start.

If you gave up on trying to make this connection on two wheels during the year and a half that Clark Street was closed for the Boneyard not-a-portal-to-hell project, it’s time to give it another go. The new bridge over the Boneyard on Clark is luxuriously wide and smooth — even a little scenic — and recent improvements by Beckman mean you don’t have to drop off the curb to cross Goodwin anymore. The Logan Street viaduct is still pretty narrow (unfortunately, sharrows don’t make the road wider or make cars more likely to share what isn’t there), but car-shy bikers can take to the new sidewalks there without disapproval, at least from me (just make sure you yield to pedestrians). And of course Main Street east of Lincoln is a mess of bumpy pavement, but that keeps the car traffic down. Overall, getting from Champaign to Urbana is much easier than it’s been in years.

Thanks to these improvements, as well as the bike lanes on Randolph and State in Champaign, and on Washington, Goodwin, and Race in Urbana, cycling infrastructure in C-U has taken a real turn for the better in short amount of time.