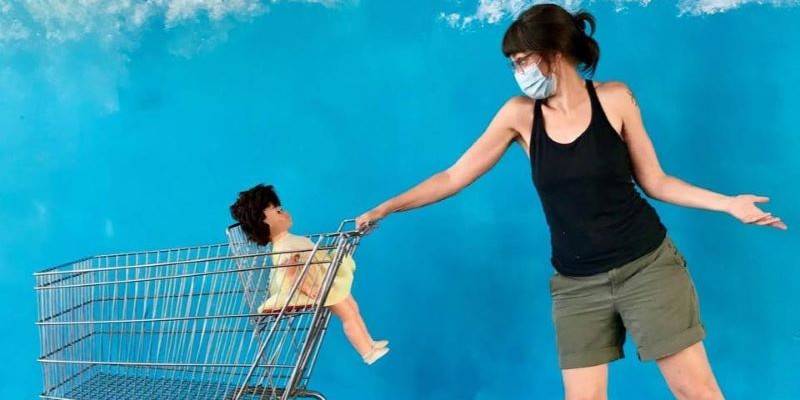 A couple of weeks ago, The Idea Store launched an online store after laying low through the first few months of the pandemic. No, it won’t be the same as wandering up and down the aisles and digging through barrels and bins of random treasures. But hopefully it will be an opportunity to not only support their work but to reclaim a bit of that Idea Store magic. As Executive Director Jessy Ruddell says, “Art is essential.” Maybe now more than ever. Also, she and her team remain committed to the store’s role in protecting the environment. I spoke with her recently about how she and the store have dealt with past few months, and what she’s hoping for the future.

Smile Politely: First of all, how are you?

Jessy Ruddell: There’s an Onion headline that I’ve been seeing recently that’s like “Hanging in there is best nation can do.” I guess hanging in there. I have a yard, which helps a lot. Emotional.

SP: Tell me a little about your background. What led you to The Idea Store?

Ruddell: I’ve always been an artist. My mom is an artist and was an art teacher when I was very small. We always had stuff lying around that I could create with, and creating was very encouraged in my house. I’m also a garbage picker. I would find stuff on the ground and pick it up because I thought I could do something with it. I’ve always kind of incorporated that into my own work; I really like found materials. I’ve always cared about the state of the world and tried not to make too much trash. When I first learned about The Idea Store it was kind of mind blowing, like all of my dreams had come true. I was a shopper there for several years, then I started volunteering there in 2015. In the meantime I was working at Common Ground Food Co-op. I built a lot of retail skills in that position. As I was volunteering at The Idea Store I was spending a lot more time in the back, seeing how it was run, and just always had this thought in the back of my mind of “I could do something with this. I could be happy here.” The job came open in 2016, and I applied and I got it.

SP: Obviously a few months ago everything came to a screeching halt. As a non-essential business that had to close, what did that initial period look like for you and for The Idea Store?

Ruddell: I’m really fortunate to have an amazing staff and volunteers. Early in March, before we had to close down, I got the flu. I was sick for the last two weeks we were open. It was on my assistant managers, who are amazing, to handle this transition. We could see sales dropping very fast. Our Saturday sales were cut to a third of what they normally are. A week before the governor announced the stay at home order, we decided to close anyway. It really didn’t feel safe to be open. We kept staff working until the order took effect. If you’ve never seen the back room, there’s always stuff to do there. So we kept folks working as long as we could. Then it was pretty much a total shutdown for about two months.

SP: Did you have initial thoughts about going online?

Ruddell: Art Coop is our mall buddy. Anna and Hilary have been incredible through this whole period, and their online shop is great. Their business model is different of course. They choose their selection; it’s not random like ours, and they had the skills to do it. It was in the back of my mind to do something, but for the first couple of months it was like no. We’re not doing this. It wasn’t just because it was hard with our business model. It really just felt like this was a shock for everyone and we all need time to rest. We were fortunate to get a PPP loan early on, and a lot of our staff qualified for unemployment. It takes enough of a psychological toll, just the pandemic alone, and then trying to manage work on top of it when we didn’t really have to…I discussed it with our board and decided we would not do that.

SP: What precipitated the decision to go ahead with it now, and stick with online rather than open the physical store?

Ruddell: It started to feel like no matter what we would have to be online. People are not going to want to go thrift shopping. Even when this is all over it’s going to be a while before it feels really comfortable to go out to a store and spend a lot of time there, rooting through other people’s stuff. There are other stores like us around the country, and I was watching what they were doing, and it seemed like there were good models out there for going online and getting our cool stuff to customers without having too many people in the physical store. Art is essential, there’s still a climate crisis going on, so we still want to keep stuff out of the trash and provide people with affordable art supplies and other supplies for their crafts, business, and education.

SP: It looks like you’re adopting a similar model to Art Coop, in that you’re selling kits, is that where your head was?

Ruddell: It’s such a “browsy” store, and there are a million little things, so we decided we were going to take advantage of our knowledgeable staff to help choose things for customers. We were already doing collage kits, so we just beefed them up and made them huge. They were already a good seller, and we have a lot of that stuff on hand. Scrap Exchange in Durham, North Carolina has a personal shopper service, and it’s really cool [so that’s what The Idea Store is doing]. It’s $25 all inclusive: for the service, $15 worth of merchandise, and ding dong ditch delivery. Then you can get on the phone or text or FaceTime, show pictures, and get exactly what you want. It’s cheaper and faster to have us choose stuff, so we want to make that an option. We have good taste. We also understand that part of the fun of The Idea Store is getting to choose stuff for yourself that’s unique.

Ruddell: There’s a lot of small things I hope for the future. I hope we can re-open the store physically and feel safe about it and have it be cost effective. It takes away some of the magic to order online. Bigger picture: it’s hard to talk about anything right now and not talk about racism. How does a business like ours make anti-racist efforts. That’s something I’m trying to work on in the background with our team. We’re historically super-white. I don’t want that to be true. We haven’t made any kind of a statement – the main thing we’ve done so far is donate sign-making materials. It’s impossible not pay attention to it and examine our own prejudices and ways that we are running our business.

Ruddell: I should definitely shout out one of our board members, Natalie Kenny-Marquez who runs Grow Marketing, and who built our website for us. It has made all of what we’re doing now possible. I could not have done it, and definitely not with the speed with which she did it.

Also, we want to see everybody soon, but be safe about it too.

The Idea Store is also taking donations by appointment on Thursday, Friday, and Saturday. There is a two box limit, and it’s a no contact donation. You can sign up for a time slot here.