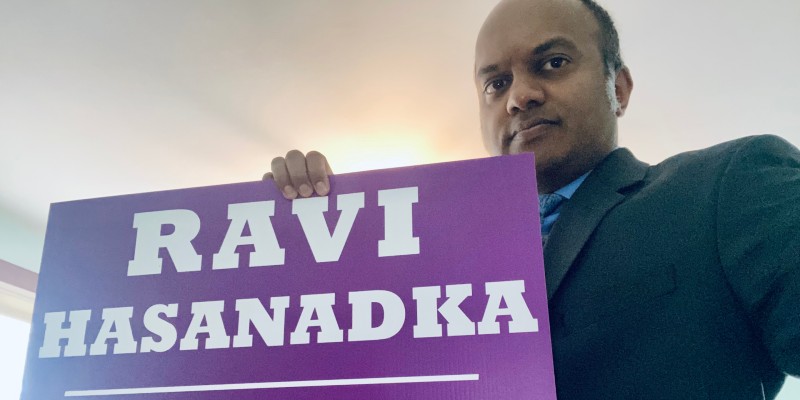 The April consolidated election brought two new faces to the Urbana District 116 school board: Lara Orr representing sub-district 3, and Ravishankar (Ravi) Hasanadka representing sub-district 5. We don’t focus much on uncontested races leading up to elections. Now that the dust (and the votes) have settled, I reached out to Hasanadka, a surgeon and Urbana parent, to hear his perspectives. Hasanadka is filling the seat left open by Peggy Patten, who did not run for re-election. Sub-district 5 covers west Urbana, which is includes portions of U of I’s campus as well as the neighborhood just west of Lincoln to Carle Park and Urbana High School.

Smile Politely: Tell me a little about yourself and your background.

Ravi Hasanadka: My family moved to Urbana in 2014 when I took a position as a vascular surgeon at the Christie Clinic. In 2016, I had an opportunity offered to me to work at Southern Illinois University School of Medicine in Springfield, for which I commuted, because already in those two years we had become quite involved in town and had really built a sense of community that we did not want to leave behind. The hour and a half commute was a bit of a strain as time passed, which is why I acted upon another opportunity in the fall of 2019 that shortened my commute to four minutes by working for OSF in Urbana.

To be a successful surgeon, I have the ability to look at data, ask appropriate questions, and make critical decisions to get things done.  This skill will translate into being a successful board member.

SP: What motivated you to run for school board?

Hasanadka: I believe in public education. I have children currently at Urbana Middle School, Leal Elementary and Urbana Early Childhood. I have been active in the PTA and spoken to many parents on the playground. When our current sub-district 5 representative announced she was not running for re-election, I thought about running. Then a few friends suggested I run. Once I started going around the neighborhood to collect signatures, not a single person asked me why I was running but most thanked me for doing so. It was quite encouraging.

SP: What is something you think is working well in the school district right now?

Hasanadka: I was rather impressed by some of the measures being taken by the district as they were starting to have more in-person students in the third and fourth quarter. These measures include symptom/temperature checks, rapid point-of-care COVID tests, weekly screening tests of staff members, and vaccinations of over 70% of staff members. There is also a vaccine clinic upcoming at the high school to try to capture the students 16 and above.  I am hopeful FDA approval for age 12 and above comes before the fall semester, but we likely will be struggling until the age drops even further to encompass all school age children.

SP: What are three issues you think need to be addressed?

Hasanadka: One issue is clearly how to re-open the schools. There is a current plan based off of CDC recommendations to have in-person learning for all students who do not have a medical excuse to require remote learning. The important caveat to that, which I feel many people are losing sight of, is that those CDC recommendations, including the recommendation of three feet of distancing for students while wearing masks in the classroom is based off of small series where infection rates in children being less than that of adults. There is a new variant that may actually infect children at a higher rate, and there is concerns for lingering effects on children even though they may not get as ill as adults. Logic tells you that if that variant is going through schools this spring then there will be potentially new data that could change the CDC recommendations, and we have to be ready to adapt to that.

A second issue is the removal of the SROs [school resource officers].

A third issue is making sure that all students have the opportunity for success by eliminating obstacles. This cannot be done late in the game, but getting those building blocks early and to provide the support needed will help achieve as much success as possible. I have seen and learned to appreciate how this is done with the dual language programs to get native Spanish speakers a better chance in an English-medium school by slowly acclimating them over the years and developing bonds with native English speaking kids so they can work together as they grow. I am hopeful the new French program will do the same. Recently, Dr. Wiemelt and two members of his educator team at UMS spoke about the AVID program, which similarly helps identify students transitioning from 5th grade to middle school and works on teaching them how to organize, study, and be successful in their other classes by giving them the additional support they need. These are both large programs in different levels of development to help bring equity to education, but equitable education needs to always be on our minds when making decisions.

SP: Can you share more about your thoughts on SROs?

SP: How can the district continue to address racial disparity in academic achievement?

Hasanadka: The key is that the district needs to really take all students and their individual backgrounds/perspectives into account.  Also,as I mentioned previously, this is a long game.  Success achieved after graduation is not due solely to efforts in 12th grade or even in high school. The foundation starts early in elementary and gets built on in middle school.

SP: How should the district approach plans for the fall, regarding in person learning?

Hasanadka: I feel a failure for the current school year is that the plan was going to be in person or hybrid and then at the very last minute the decision was made to go all remote.  There were issues with access to technology. There were issues with teachers needing to figure out how to run a class on Zoom, how to be effective in Google Classroom, Clever, Seesaw, sending printed handouts home, etc. I am rather pleased with the instruction in all my children’s classes, but it did take a month or two to get there. This was at no fault to the teachers. They are doing the best they can with what they have in a time like nobody else has ever experienced. So going forward to next fall it would be important to not put all our eggs in one basket but to be fully capable and effective if we need to pivot to Plan B in August or later in the year. The experience gained this year will only make next year better.