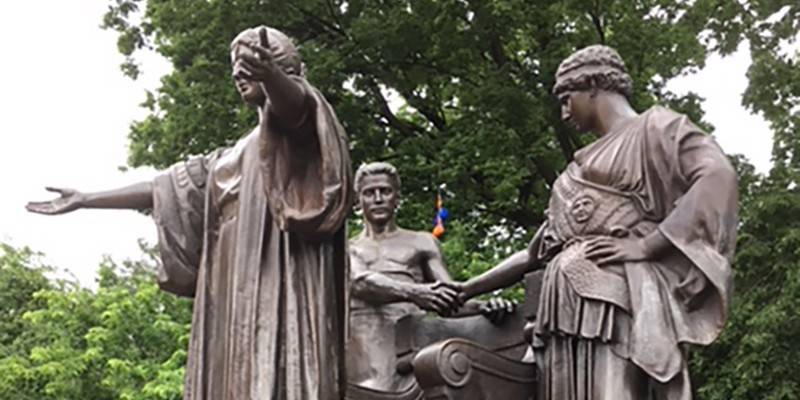 With campus relatively quiet these day, it is a great time to go looking for local history at the University of Illinois. Of course, campus itself is one of the historic gems of our community.  The online UHistories project features a great virtual tour. This area is also filled with interesting and informative historical markers that make for a fun adventure.

The 1976 Historic Sites of Champaign County book designated eight places on campus as official Historic Sites. In our last episode of “Historic Sites Re-visited” (the third in this series), we went looking for Lorado Taft’s famous Lincoln Statue in Carle Park. Taft is most famously known as the sculptor of Historic Site #53, the iconic Alma Mater. This Classical bronze group, with Alma flanked by figures representing Labor and Learning, was done in the Beaux Arts style and dedicated in 1929. It originally sat south of the (Foellinger) Auditorium building. In 1962 Alma was moved to her current location (southeast corner of Green and Wright streets), where thousands of students and tourists gather each year to be photographed with the beloved sculpture.

Right behind the Alma Mater is Historic Site #52, Altgeld Hall. Dedicated in 1897, Altgeld was originally designed to be the University Library. Architects Nathan C. Ricker (head of the Department of Architecture and Dean of the College of Engineering) and James M. White (the first University Architect) designed “one of the first structures in the state to incorporate what was then regarded as an innovative system of ‘fireproof construction,’ using reinforced concrete” (Historic Sites). It was named in honor of John Peter Altgeld, Governor of Illinois from 1893-1897.

A fine example of the Richardsonian Romanesque style, Altgeld features elaborate carved stone details and beautiful painted interior treatments by Newton A. Wells. The Altgeld Hall bell tower, also called the Senior Memorial Chime, was dedicated on Homecoming Day, 1920. From 1927-1955, Altgeld housed the Law School. Since 1955 it has been home to the Mathematics Department.

Lorado Taft’s childhood home, Historic Site #54 (now at 1401 S. Maryland Drive, Urbana) was originally located at 601 E. John Street, where the Swanlund Administration Building now stands. Taft lived in this home from age twelve to twenty-four (1873-84), his father being the first Geology professor at the university. The elder Taft built the residence in 1873 near the nascent campus. It was originally “surrounded by vegetable gardens, a lawn with shade trees, and a barn standing at the rear of the lot” (Historic Sites). It exhibits a mix of Italianate and Swiss Cottage influences, with distinctive roof bracketing, ginger-bread porch ornamentation, and room extensions. The home faced demolition in the mid-1970s but was saved and moved to its present site in 1981.

Nearby at 1403 W. Lorado Taft Drive is Historic Site #49, The Mumford House. This is a tricky one to get to, partly because you cannot really “drive” on Lorado Taft Drive. It is situated just beyond the southern edge of the South Quad. You can pull into the parking area east of Sixth Street between the Education Building and the Ricker Architecture Library and go as far to the east as you can. You’ll see the modest farmhouse near the McFarland Memorial Bell Tower.

Mumford House is the oldest building on the U of I campus. Built in 1870 as “a fair model for a farmer’s house” it was intended to be “tasteful in appearance, economical in cost, and compact and convenient” (Historic Sites). A small room off the entryway was meant to serve as an office for modern farm management.  It was the home of many Deans of the College of Agriculture, including George E. Morrow (for whom the Morrow Plots are named) and Herbert Mumford (for whom the house is named). The house, listed on the National Register of Historic Places, was in a state of disrepair but was stabilized by a 2010 restoration effort.

Just a short walk north of the Mumford House you’ll find the famous Morrow Plots, Historic Site #50 (north side of Gregory Drive near Matthews Street).  Named for George E. Morrow, the first Dean of the College of Agriculture, these modest fields “constitute the oldest permanent soil experiment . . . in the nation and have been in continuous use since 1876” (Historic Sites).  Originally designed to study the effects of crop rotation, the Morrow Plots stand as a symbol of the University’s commitment to agricultural research and education.  They are listed on the National Register and have a Department of Interior designation as a National Historic Landmark.

Our agricultural theme culminates with Historic Site #48, the University of Illinois Round Barns (south side of St. Mary’s Road south of intersection with Goodwin). These three structures were built between 1907 and 1910 for dairy cattle. Designers W. J. Fraser and H. E. Crouch were inspired by a type of construction associated with Massachusetts Shakers in the 1820s. The style gaining wider popularity in the Midwest the 1880s-90s. According to Historic Sites, “The principal advantages cited for round barns were economy (less material to enclose a given area), strength (round form was especially resistant to high winds), and convenience (fewer steps and less effort in getting feed to the cows). The functional nature of the round barn is clearly expressed in its form, with the central silo supporting the roof.” With the advent of mechanization, barn construction turned more toward the needs of machinery storage. Round barns like these gradually vanished from the landscape.

Our campus-based episode of “Historic Sites Re-visited” ends at the Armory (Historic Site #55, E. Armory St. between 4th and 6th St., Champaign). In 1912 the University of Illinois student military regiment was the largest in the nation, prompting the need for a new Armory to replace the old “Military Hall” (now the Kenney Gym Annex). Illinois State Architect W. C. Zimmerman’s design created a 400’ by 200’ drill space roofed by 14 three-hinged arch trusses rising nearly 100’ above ground. Only the central drill hall was finished until 1925, when the state authorized funds to complete the surrounding rooms. Architect Charles A. Plat designed this phase of the building, which features a Georgian-style façade.

You can learn more about nearly every one of the sites in this week’s episode at the Explore CU website. If you’ve been counting, you may have noticed we came up one short of the eight Historic Sites I said were on campus. The eighth site, The Wesley Foundation and Church, will be featured on our next episode’s tour of historic churches in Urbana and Champaign.