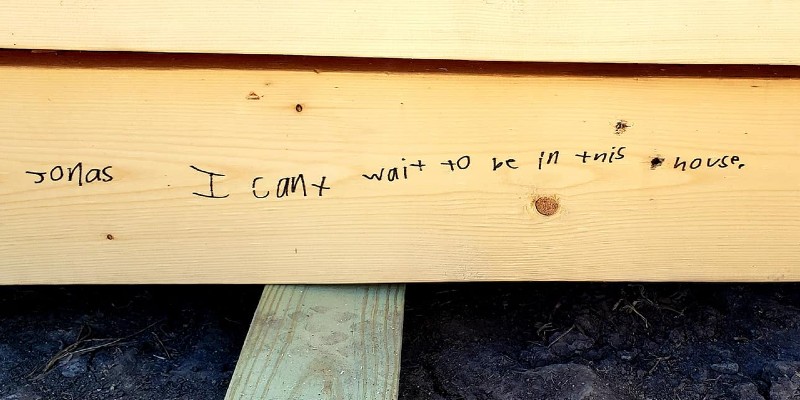 This year, Habitat for Humanity of Champaign County is celebrating 30 years of creating new homeowners in Champaign-Urbana. The international organization began in 1976 with the concept of partnership housing, “centered on those in need of adequate shelter working side by side with volunteers to build decent, affordable houses. The houses would be built at no profit. New homeowners’ house payments would be combined with no-interest loans provided by supporters and money earned by fundraising to create “The Fund for Humanity,” which would then be used to build more homes.” There are now Habitat chapters in all 50 states, and 70 countries, and have served more than 35 million people.

One of those chapters formed in C-U in 1991. It was initially all volunteer run, a collaborative effort between local churches and community members. Those people came together, wanting to address racial inequity in housing. Says Chad Hoffman, executive director of HHCC, “Black home ownership, even today, is still way behind white home ownership. The wealth gap is eight times between white and Black households.” In 1991, and in the present, the emphasis on home ownership is key. “Home ownership is the number one way to change the wealth gap…it changes so much in terms of where you are as an individual. While it’s expensive to build housing, it’s a huge key to change where we are as a society.”

The organization built one house that first year, and by the end of 2021 they will complete their 120th home. They’ve gone from an all volunteer endeavor to having an executive director and full staff. In 2003, they opened Restore, now located, along with the Habitat offices, at 119 N University in Champaign. Restore serves multiple purposes: keeping 200 tons of materials out of landfills each year, providing a place for community members to find affordable furnishings, and generating funds for future building projects. There is also a collegiate chapter of Habitat  at the University of Illinois, which formed in 1993. The U of I chapter is responsible for one of Habitat’s builds each year, providing the fundraising and volunteers.

For those that aren’t familiar with the Habitat home building process, it’s more than just a group of volunteers coming together to build a home for a family. The family is involved every step of the way, from working on the build to purchasing the home from Habitat through an affordable mortgage without the interest and fees typically associated with buying a home. The organization also continues their contact with the homeowners after move in. According to Hoffman, “At the very least we do a one year walk through with the families, making sure everything is fine with the house, that also serves as a check in to make sure everything is okay.” Kim Gollings, Community Development Director, stays in communication with families, and every year there is a family picnic that brings homeowners and Habitat staff and volunteers together. They have two homeowners on their Board of Directors, and multiple homeowners on committees providing their unique perspectives.

A lot of things were different for Habitat over this pandemic year. Back in March 2020 they had to adapt on three different fronts. “The triple whammy,” as Hoffman calls it. They had to close the Restore outlet for a time, cutting off consistent cash flow. Since Habitat is also a mortgage holder for their homeowners, they were having to provide forbearance on mortgages due to reduction in and loss of employment. Then of course, they weren’t bringing in volunteers for builds. The pandemic basically paralyzed every aspect of the organization. They were able to complete one build last summer, but there had been four planned for 2020. Those families unfortunately had to wait, but their projects will be moving ahead this year.

Through all the challenges of the past year, they are still standing. Restore is open again, albeit with limited hours. Despite fundraising opportunities being diminished, through assistance from United Way, Community Foundation of East Central Illinois, PPP loans, and generous donors they are able to continue with planned builds and have been able to support their homeowners during a difficult time. And now, with the currently wild housing market and skyrocketing home prices, Habitat’s ability to connect families with affordable homes is even more crucial. “We’re the only housing provider right now that’s building, in any type of economies of scale, housing units for purchase. There are other places for rent, but no one who’s actually changing that dynamic and saying ownership is the key.”

It’s the tangible outcomes that make the challenges of the past year, and the regular challenges of running an organization that is all at once a retail outlet, bank, social service agency, and construction company worthwhile. “I see what happens with the families in our houses. Their lives are transformed, not only for them but for their kids. Grades improve. High school graduation improves. Pregnancy rates decline. Interactions with police departments decline.” Hoffman also emphasizes the culture of care that is cultivated in the home building process. “They see how many people care about them, that they’ve never met before…it transforms the family.” Hoffman also credits the resolve of his staff and board members. “It’s so much easier to care, as an executive director, when you see how much everyone else cares too.”

In recognition of their 30th anniversary, Habitat is selling commemorative bricks to create a paved patio in their Habitat Community Garden, a place where their homeowners can have access to fresh fruits and vegetables. You can spend between $150 and $350, depending on the size and engraving, and the money will be used to fund a build in 2022. The fundraiser will continue throughout 2021. You can find out more here. If you are interested in volunteering, check out their volunteer calendar for opportunities.