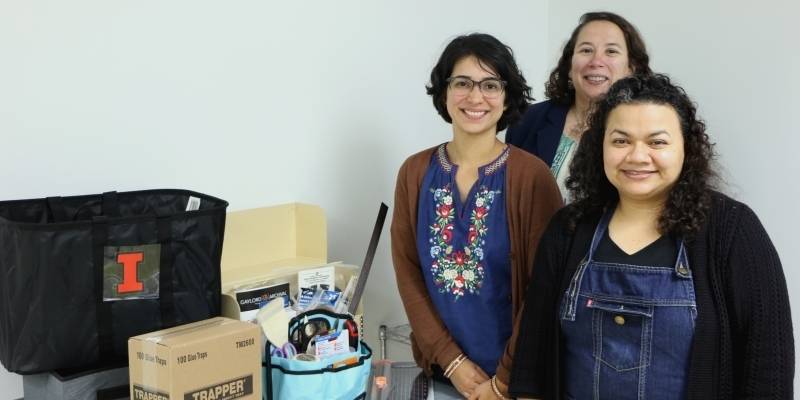 Well before the hurricanes Irma and María devastated Puerto Rico in September 2017, the University of Puerto Rico campus community was both resisting and weathering looming austerity measures. Today, nearly four months into the aftermath, concerns grow over the pro-corporate influence over the US territory to cut funds and privatize UPR and grade schools in the wake of the hurricane. Community and campus institutions of Puerto Rico have begun to share their stories of rebuilding, even as many wait for power to be restored. One such story made its way to Urbana-Champaign. It’s the story of three campus librarians at UIUC and at UPR Mayaguez who not only came together to save the collections at the UPR Mayaguez library, but kickstarted the efforts to restore, preserve, and strengthen public cultural institutions across Puerto Rico. It would be through a National Endowment for the Humanities grant that Dr. Hilda Teresa and Dr. Jaquelina Alverez of the UPR Mayaguez library secured that would bring Miriam Centeno, the Collections Care Coordinator for the University of Illinois Library, to the island to help in the disaster recovery efforts.

In the early morning of September 20, 2017, Hurricane María made landfall on the island of Puerto Rico, tearing through cities and towns, breaking bridges and flooding roads, destroying the power grid and cutting down nearly all forms of communication. Meanwhile back in Urbana-Champaign, Centeno was not able to call her parents for a week. She listened to the island’s radio broadcasts and searched social media, listening to people’s stories and calls for help, asking others if they knew if their families were alive. In order to not sink into the despair of not being able to contact her parents and in experiencing what was happening to others in Puerto Rico, Centano began creating an inventory of cultural institutions who were assessing damages.

On the island, Dr. Hilda Teresa and Dr. Jaquelina Alvarez, two university researchers and instructors at the University of Puerto Rico (UPR) Mayaguez library, were moving as quickly as they could to save their collections and likewise assess the damages of cultural institutions. A couple of days after Hurricane María hit, Teresa and the director of the library were able to make the eight minute commute in the director’s truck from their neighboring houses to their offices located in the annex of the UPR Mayaguez library. Alvarez lived a little farther away in town and couldn’t leave her house until four days after. However, she had a landline which was still operational and was able to call the Library of Congress to find emergency resources. Immediately, the Library of Congress helped Alvarez identify emergency funding from the American Library Association and guided her in taking the next steps to save the library. “We had to act quickly,” said Alvarez. “If we waited until the all of the campus staff were able to come back freely and dry all of the areas, it would have been too late for our collections.” She added that community libraries that were not destroyed in the aftermath of the hurricane have served as safe, inclusive spaces where people have been able to reconnect with family members and friends. Libraries in Puerto Rico are in the center of most towns and beyond importance of saving their physical structure, the work of libraries in preserving and curating cultural works and cultural scenes is very important to the people of Puerto Rico.

When Teresa and her director entered the library with large, empty buckets in hand, they were immediately hit by the smell of soured carpet. Trudging through the floodwaters, they made their way through the annex dimly lit by the natural light cast through its few windows. They began to painstakingly clear the waters with buckets. Where the light struck the walls they saw the mold that had rapidly replicated overnight and continued to carpet the annex’s insides in green.

When the emergency grant was approved and the cleaning kits delivered, Teresa and Alvarez were able to stabilize the annex of their library, which took several weeks. Then they reached out to other libraries on the island to see how they were fairing and what they needed. Teresa, with the help of a volunteer, traveled to 11 different  survey libraries. From the information they gathered, they applied for a National Endowment for the Humanities (NEH) grant to get help with restoring savable damaged books and develop preventative strategies to preserve collections and create disaster preparedness plans. After the NEH grant was approved, the Library of Congress reached out to Centeno, who formerly worked at the Library of Congress, to conduct their trainings.

Centeno attributes the ability of outside groups to come to the island with a plan to help out with recovery efforts to Teresa and Alvarez’s research and outreach work. These outside groups who worked in tandem with the Library of Congress included the National Heritage Responders and the National Emergency Heritage Task Force, a group that involved the Smithsonian Institute, the National Archives, and Federal Emergency Management Association (FEMA). The responders used the inventory of cultural institutions and the survey data that Teresa, Alvarez, and volunteers in Puerto Rico gathered to tailor trainings for participants in personal protection and cleaning strategies. Knowing that the responders were providing these initial workshops on immediate stabilization, Centeno focused her training on collections care, preservation strategies and disaster preparedness planning.

“What we realized, myself and these groups included, looking from the outside in, is that we needed the expertise and the familiarity that these local institutions and the people on the island had with the different cultural scenes in each town to let us know what was going on and where the damages happened,” said Centeno. “When people from the outside wanted to come in and help they knew where to go and what training was needed.”

When Centeno arrived in Puerto Rico, she was able to finally reconnect with her parents, who drove her to the UPR Mayaguez library to meet Teresa and Alvarez for the training. Over the course of three weeks, the proposed one-time training grew into three workshops held in three different towns. Over 100 people participated in each workshop, representing nearly all cultural institutions in Puerto Rico who were able to stabilize, recover, and preserve their building and collections. “The original request was just to do this one time training, but Hilda and Jaquelina would not keep this information to themselves,” said Centeno. “They set up the trainings in a way so that all of the workshop participants could go back and train others in these techniques and strategies.”

Since Centeno’s recent return to Urbana-Champaign, Teresa and Alvarez are beginning to wrap up the fall semester of library courses that they had been teaching before put on a three week to one month hiatus after the hurricane hit. Next week they will go on break and some students will be returning to family homes still without power. In March, they will return for the spring semester, ready to incorporate new preservation courses that they hope to help replicate and make a requirement at all of the library and library science departments of the University of Puerto Rico campus system.

“We are so grateful for the Friends of the Library and Miriam for supporting our efforts. With their help, the libraries of the University of Puerto Rico will be training up the island’s next generation of librarians in preservation,” said Alvarez. “We have to prepare our future leaders to work in a new, aging Puerto Rico, where many young people and their families have already left.”

To learn more about the work of librarians in Puerto Rico, UIUC preservation efforts and how you can support, please check out some content that Centeno, Teresa, and Alvarez shared with us:

Mily Rodriguez, the Librarian of the rare collections, wrote this piece about her experience.