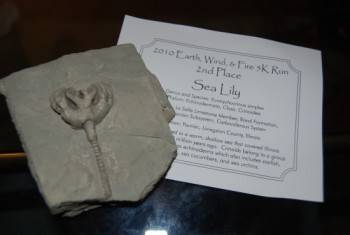 It is six weeks out from the Illinois Marathon, and if you’re not in full-fledged training mode, you may end up a volunteer or spectator come race day. That is, of course, unless you’re running the half marathon like I am. Well, you probably won’t run as Abe Lincoln, but you still have time to be in great shape for the half marathon on May 1st. Remember, the half is half as long as the full marathon, half as time consuming, and half as painful. Even better, it is just as rewarding.

If you have a solid base of running under your feet, meaning you can run at least six miles already, you are well on your way to training for the half. Not sure what to do? I will take you through my training this week. Let’s see if you can keep up.

Saturday 3/6: The week begins early with an eight o’clock training run at Body n’ Sole in Savoy. In the 30s with wind chills in the 20s, the weather looked to keep me bundled up for the cold. I wore two long sleeve tech t-shirts (that wick away moisture), a jacket, and running pants. With the sun, though, the temperatures rose dramatically, and we shed the jacket before we even hit the pavement. We headed west on Curtis to Duncan. The loop took us north to Windsor, and then east to Prospect and Devonshire, before heading south back to Body n’ Sole via Fox Drive. The run was eight miles long, but it was tempo, or thirty seconds to a minute slower than my race pace. My group of runners finished in an hour and six minutes, or at a pace of 8:20 per mile. Of course, I was carrying the State of Illinois flag throughout.

Sunday 3/7: This is a rest day. After a long run, I like time to recover. The quickest way to injury is to overdo it.

Monday 3/8: I cross-train on Mondays. It is easy to get too focused on running and forget that there are other muscles in our body. I rode the bike trainer indoors, watching Battlestar Galactica. Thank you, Commander Adama, for inspiring me to stay on the bike for an hour. “So say we all.”

Tuesday 3/9: I lace up again and hit the road for what amounts to six miles with the running club from the Armory on campus. We headed east on Pennsylvania through Urbana, as the setting sun left the western sky a rosy pink behind us. We turned north on Cottage Grove and then worked our way west on California, hitting campus and running to First Street before heading back to the Armory. We stayed bunched together until the last mile or so when, feeling good, I pushed the pace with a few other runners. I finished with a time of 47:12, or a 7:52 mile pace. Not bad this early in the season.

Wednesday 3/10: Wednesdays would normally be a speed workout day at the Armory, but it turned into an outdoor run. The weather was too nice to pass up. I ran down Prospect to Savoy’s Church Street and back. It is a six mile there-and-back, and it is a route I love. I saw at least seven other runners and a gaggle of walkers enjoying an early 70 degree day. This run following up on the previous day’s six might not be the best training, but I wanted to maintain my mileage this week in preparation of Saturday’s race.

Thursday 3/11 and Friday 3/12: These are recovery days. After running nearly a half marathon over Tuesday and Wednesday, I need rest. Taking off Thursday and Friday will also help me focus on Saturday’s race.

Saturday 3/13: The week concludes with a race. The Earth, Wind, and Fire 5K is one of the first 5Ks of the year in the Champaign-Urbana area. It circuits the University of Illinois Quad twice before finishing at the Natural Resources Building. It was foggy, a bit chilly in the 40s, and damp. Two hundred runners and walkers lined up in the event put on by the Illinois State Geological Survey. I ran the two miles from my house to campus, the 5K on the Quad, and then back home afterward for a total of seven miles. I finished the race fourth overall in a time of 19:46,

and I placed second in my age group. The coolest part: the awards. Age group winners won casts of real fossils.

All in all, this was a great eight days of running. The weather was awesome, the distances were comfortable, and I felt strong.

Seven weeks until race day. Do you have the mettle to lace up? It’s not too late to watch the Illinois Marathon from the inside… at least half of it anyway.