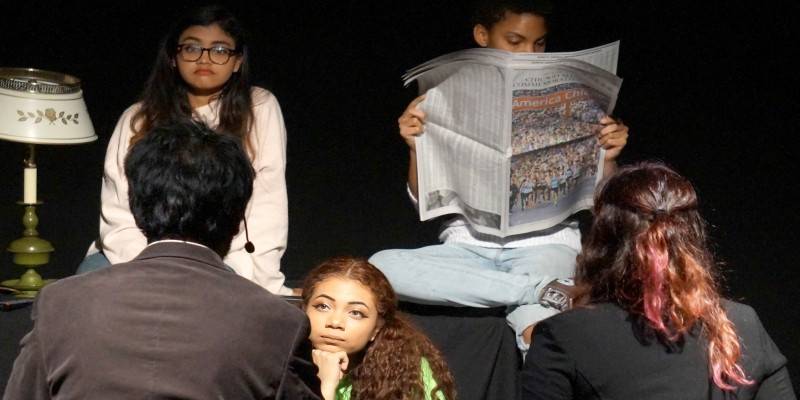 On a Tuesday evening in March just before spring break, rehearsals for two plays took their turns on the well-worn stage of the Armory Theatre at the University of Illinois. Una Vida Mejor, A Better Life, written by INNER VOICES assistant director Victor Ruiz-Divas, grad student in Education, enacts the various struggles of Angel, a student impacted by family issues around immigrant status. Angel is played by five different actors in different scenes, a surprising and effective way to show how these issues cross identities. In the second play, Endangered Black Girls by U of I Professor Ruth Nicole Brown, the cast reveals “the obstacles, successes and dreams — the lives — of middle school black girls growing up in the Midwest” through the lens of hip hop feminist pedagogy.

Each play is followed by a post-performance conversation, facilitated by “animateurs.” These are students and counselors skilled in “making things come to life” through dialogue that takes advantage of the open moment when an interaction on stage can evoke audience members’ own vulnerabilities. Live theatre creates a dynamic, charged encounter between actors and audience and INNER VOICES’ business is to pose radical questions to promote social change. The end goal is to support healthy lifestyles and the well-being of students and campus overall, and ultimately, to make this world a better place.

Here are just a few of the topics INNER VOICES has tackled over its quarter century:

• Café Estresso, “I’ll take a large order of stress, a side of pressure and a cup of coffee. To go. I’m in a hurry. Oh, and can you leave room in that for a splash of anxiety?”
• Open Season, delving into hate crimes.
• Stories that Need to be Told, dealing with domestic violence and dating abuse.
• Depression. . . the musical . . . sort of.
• Over Here, Stories of Student Veterans.
• Freeze! Body Police, looking at the forces that shape our ideas of body image.

This is live theatre. It’s entertainment, with an edge. Humor, paradox, tension, wit are the tools that can break through unconscious ways of thinking and feeling. The plays will make you laugh; they will mesmerize you. They will disorient you and expose unquestioned assumptions. They may change your life.

Ensemble is the essence of the INNER VOICES program. For Director and Coordinator Lisa Fay, that is not an everyday word. It is in fact revolutionary. She comes with experience of movement-based performance spanning years and continents, working singly, with partner Jeff Glassman, and also larger groups. Her conviction is that the work and practice of ensemble theatre is a political act: in its own form it creates the social structure that its members want to shape in the larger world. It opposes top-down hierarchy, imposition of identities that do not nurture, inequalities of gender, race, culture, and class, and power-over rather than the collective power of the group. The creativity of the individual is nurtured, but the larger creative body is the ensemble itself, where members take turns leading each aspect of building a finished performance. Each will specialize, from writing to rewriting, stage design, costumes, lighting and sound, as well as the role of animateur, but as a group they share all these responsibilities. Fay views it as central that each member of an ensemble share the responsibility at different stages for being the “authority.” She draws on the playful idea of “floating hierarchy” from Herbert Brün, pioneering U of I faculty in experimental music, composition, and performance.

Fundamental to the work of an ensemble is to care for each member. They become a tight working team, reliant on each other through hard work and challenges, achieving the trust that allows for vulnerability and experimentation, risks and failure. You may recognize the form in other ensemble theatres, including Saturday Night Live and Second City.

Another marked strength of INNER VOICES is its longevity. A quarter century of assured staff, a stage, and the support of departments has provided the stability that allows experiment and growth. The ensemble holds yearly retreats and periodic re-visioning sessions gathering members, staff and stakeholders across campus and the community. The group may adjust its focus to suit changing strategies of the University overall, or shifts in the larger social scene.

Given a location and a structure, they are able to lay the groundwork for long term projects, such as their national call for scripts. They have engaged over the years in collaborative projects with students, theatre practitioners, cultural workers and other artists from across campus and around the world, including artists from Canada, South Africa, Rwanda and the United States. By faculty request the ensemble has prepared presentations for classes in Community Psychology, Human Development and Family Study, and Gender and Womens’ Studies. They provide racial justice ally training with the Office of Inclusion and Intercultural Relations. Excerpts from their production What’s In a Name? were highlighted a recent faculty retreat.

The power of theatre to present complex issues in dynamic ways and open the door for creative conversation is what led to the founding of INNER VOICES in 1995. Counseling Center staff member and faculty Judy Ellickson was concerned by an increasing number of students revealing the impact of childhood sexual abuse. She perceived the “inner voices” coming out of a fractured sense of self, and sought effective ways to address complex issues. With the encouragement of Counseling Center director Tom Seals, she invited playwright Louise Wisechild, herself a survivor of sexual abuse, to direct a performance of The Obsidian Mirror at the Armory Theatre. The impact on student participants was exactly what Ellickson was looking for. She pursued partnerships with the Theatre Department and the Health Education division of McKinley Health Center. From there the program was born, with Ginny Simms as its first director, bringing experience in voice, opera, and theatre.

Simms brought in Lisa Fay to help with the technical aspects of production and publicity. Fay was already a well known theatre artist, with long experience performing from Chicago and New York to Atlanta and beyond. When Simms left, Fay became director; J. W. Morrissette joined as assistant director. Fay has directed since, except for several years when Latrelle Bright led the program. Students can participate as volunteers, but the core of INNER VOICES is a comprehensive curriculum including four for-credit courses which Fay designed and that serve as a national model with its emphasis on experiential learning and arts based research. Both undergraduate and graduate students enroll.

Introduction to Social Issues Theatre, currently instructed by Mark Enslin, grounds the program in the history and traditions of performance focused on issues of social justice and change. A seminal thread is the work of German playwright Bertolt Brecht, spanning the 1920s to 50s, who aimed to transform the bourgeois values of theatre and use it to bring about social and political change in turbulent times. In the 1960s and 70s American political protest around issues of the Vietnam War was the focus of the San Francisco Mime Troupe, still active after 50 years. Other influences include Chicano popular theatre engaged around farmworkers’ rights, Brazilian artist Augusto Boal’s Theatre of the Oppressed, guerrilla theatre, hip hop, and more. Students immerse in practice through evaluating scripts, devising, and the techniques and skills of acting. Enslin emphasizes that INNER VOICES forms an intentional community, offering students an immersive theatre grounding as well as a social support structure, true to the essence of ensemble theatre.

Fay teaches Devising Social Issues Theatre, guiding students in all the skills required to develop stories around complex social issues into original, timely and vital theatre.
The third course, Leading Post-Performance Dialog, is currently taught by Sam Smith, Director of Civic Engagement and Social Practice at the Krannert Center for the Performing Arts. It encompasses the roles of animateur, teaching students the tools to create effective cultural events. They work with the actors, analyzing each scene to highlight fruitful ground for post-production dialogue, and learn to create audience engagement in the process of social change. Smith asks students, “what is it that we learn in dialogue that we don’t learn in other ways? What are the unique opportunities of live performances to bring about change within individuals and the larger community?” He knows, through his own community and international work in Malawi and Sierra Leone, the power of theatre and dialogue to create conversations across cultures to shape society.

The culminating for-credit class in the program is Fay’s INNER VOICES: Social Issues Theatre Ensemble. Students audition and form the ensemble, which will be a cauldron of social and instructional interaction, in class six hours a week and performing 15 times a semester in theatres, classes, and workshops, both on campus and in the wider community.

The students who have been part of INNER VOICES describe it as a life-changing experience. They come together with a shared interest in looking critically at their world, then develop their own model for creating working and social groups throughout their lifetimes. Sakshi Srivastava, a grad student in engineering, had some experience acting in high school, and was intrigued by a flyer she saw in 2017. For one performance on farmer suicide she collected statistics and reports from all around the globe. For her, the prime experience was being part of the ensemble and learning the dynamics of teamwork through hard work. Acting helped her overcome stage fright and be more comfortable making presentations. She was thrilled when she realized she was “an actress.”

Jigeesha Ghosh, who just graduated in psychology, was given extra credit her freshman year to see an INNER VOICES performance as part of an Abnormal Psych class. It connected directly with some personal issues, and gave her the opportunity to engage with others who shared her concerns. She auditioned sophomore year and joined the ensemble. Coming from India, she knew few people on campus; INNER VOICES provided a rich new community. Most important to her is the strength and dedication of ensemble members, who became friends for life. They gave her a space to collaborate, create, and write. She emphasizes that performances are free, and the small venues allow intimate conversations afterward. By stepping into the shoes of characters different from herself, she has been forced to experience realities she never would otherwise.

Endangered Black Girls represents a full circle return for Dr. Ruth Nicole Brown, Associate Professor in Educational Policy, Organization and Leadership Development and the Department of Gender and Women’s Studies. She first joined INNER VOICES in 1997-98 as an undergrad in political science. Brown too valued the ensemble experience, the intense teamwork of the members, and the creative energy melding from all participants through devising, revising, brainstorming, rehearsing, acting, and reacting. It gave her an intellectual immersion in work by writers such as Audre Lorde and James Baldwin. It was an “alive thing” that pushed boundaries; debate and conflict are organic to the group. After graduate study, she returned to the U of I for a doctorate. One chapter in her dissertation was the original script of Endangered Black Girls, part of her larger work with radical youth intervention. She was delighted when Fay suggested that INNER VOICES bring it to the stage. Brown is pleased that EBG is part of INNER VOICES’ 25th anniversary, whether the final performance is live or virtual.

However the campus will emerge from the COVID-19 pandemic, the INNER VOICES ensemble will mastermind just the right venue for the two plays still in active rehearsal, remotely – and a fitting celebration of their quarter century. We can expect a cogent and provocative response on stage to this chaos of global pandemic.

INNER VOICES is sponsored by the U of I’s Counseling Center and the Theatre department.