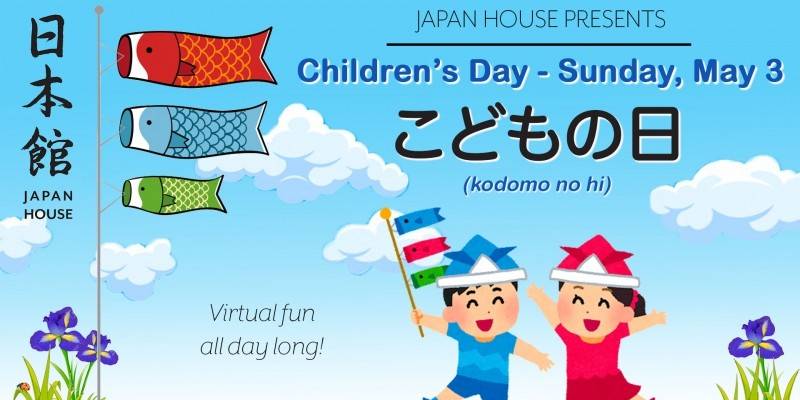 Children’s Day was always scheduled for May 3rd, but the original plan called for a day full of live events. After all onsite events were canceled, Japan House decided to push ahead and virtually host Children’s Day. I chatted with Michael Darin, the Educational and Experience Coordinator at Japan House, about the decision to move Children’s Day online as well as how he is navigating this moment as an event coordinator.

Smile Politely: Generally, how is Japan House adjusting to this moment? I saw that you partnered with ChambanaMoms on the event “Chambanablooms” that took place in early April.

Michael Darin: Initially when they told us everything was going to be canceled, it was disheartening because we are an entity in the community that people look to for little bursts of inspiration. Even if they can’t come to the events, they like to see what happened.

For Sakura (better known as Japanese Cherry Blossoms), we usually have people come out to the Arboretum and walk around and look at the cherry blossoms which are beautiful right now. Even though the Arboretum is open, we don’t want to encourage people to come for health and safety reasons. But for us posting about the cherry blossoms is how we communicate and a lot of people don’t even live in town and are expecting us to post because it is something they look forward to. In Japanese philosophy it is called ichigo ichie which means “one chance, one opportunity” or “one life, one opportunity.” The Sakura represent that. They are a fussy flower in a way that can be affected by nature. Last year they didn’t bloom at all. We were very surprised. People called us and were mad. It was this “moment in time.”

For this year, I came up with this idea of ChambanaBlooms and to partner with ChambanaMoms. That way we could say “don’t come to the Arboretum, do stuff at home. Look around your neighborhood.” I did some craft projects online. It was also a way for us to experiment with limited resources and testing out the technology. Now that we are a couple of weeks into it, we are getting better. We had some success. People looked at the cherry blossoms and commented that they were sad they couldn’t come around. I don’t know if a ton of people did the crafts but that’s ok. It’s just about being in the community, that people know that we care.

SP: Tell me a little about Children’s Day. What are you goals and hopes for it?

Darin: Children’s Day is very important to us because we love kids. A lot of times people don’t realize that Japanese culture is so kid friendly. Children’s Day is really great for me because it’s about getting out and being rambunctious, doing things. It was traditionally a boy’s holiday. It got changed to Children’s Day in 1948. The day has a lot to do with martial arts because of the history of the armor. We are going to be representing some of that all day long by doing online live and pre-recorded things. We will post a video that our interns are putting together that will launch the day and it will have the history of Children’s Day.

After that we will be posting all day long different activities people can do. We have craft projects. We are going to do some live activities. We are working with Kokushi Midwest Judo and they are going to do a 15-20-minute Judo demonstration. It will be family friendly, no equipment necessary; it will be some basics of Judo to get people moving. We are also going to have a live sketch artist, Maxx Gogski, interpreting a character for Children’s Day. This artist is going to be drawing a symbol of the day and talking about it and encouraging people to draw along. At the very end of the night we have a very special opportunity. A special guest we can’t announce yet will be reading a Japanese children’s fairy tale to end the evening for us.

We are really excited. We are hopeful that people will take their phone and go outside to do the Judo. If they have creative kids and want to decorate their house, we are going to have some opportunities. Fish like coy and carp are the symbol for Children’s Day. We have something fun we are going to be doing; it is a toilet paper roll craft to make a carp for a streamer. We want to be light-hearted with it. It is one of our favorite holidays. We’re hoping that people can have the craft project, a coy windsock, outside on their porch. That’s the idea in Japan, they put them up the day before and the day of and the coy are on the porches and are waving in the wind, like a kite in the wind.

SP: Lots of organizations and people are deciding whether to cancel, postpone, or move their events online. Why was it important to you and Japan House to move Children’s Day online?

Darin: The entire reason that we exist is what’s called Chado, the way of tea ceremony. The whole point of tea ceremony is about respect and service. At the heart of Japan House, we have those two tenets. We try to bring those tenets to one another daily and through our organization and events. It is ultimately about respect, giving back to community, and service.

Things like Matsuri are important but some of these spring time events, and where we are right now, with a little bit of uncertainty, these touches from Japan House are about being holistic and supporting wellness. It’s about us providing a vehicle for people to have an opportunity to have clearer thoughts and wellness. That’s what the cherry blossoms provide. That is what is hopefully the inspiration behind tea ceremony. But even the craft projects send a message. We are saying put down the stuff for ten minutes and follow the little origami fish and think about that for a minute. We feel like there’s a lot of therapy in that and that’s why we exist to be a part of the community in that way. For kids right now in particular, it is so uncertain for them. What can we do right now that even a parent can get inspired about? Because that’s going to show to the kids. Parents are having a hard time getting inspired themselves.

This is something a lot of Americans don’t know about. There are a lot of Japanese cultural holidays. They are fun. They are mostly about nature. Right now, it’s about ‘get outside!’ Children’s Day is about that. It is about the rambunctiousness of springtime; the fish are reproducing. The flowers are coming up. Don’t waste it. Get out there. Seize the day.

SP: How do you see this experience shaping how you think about future events like Matsuri?

Darin: It is creating possibilities for people who aren’t necessarily in the area to experience Matsuri virtually with live feeds and interactive social media, something that I feel we will take into whatever is “next” for events. We never thought about inviting people virtually as well as having guests live. It could open up the reach of our events beyond our imagination.

Save your toilet paper rolls and join Japan House for Children’s Day on Sunday, May 3rd. Japan House will be announcing additional virtual events in May. You can learn about these events and other Japan House news by signing up for the newsletter.