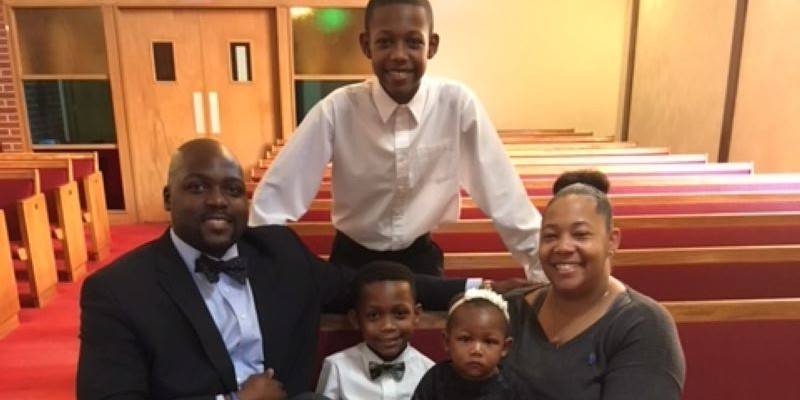 Last summer, Prince and Mallory Robertson, along with their oldest son Jeremiah, published Jero’s Journey: Finding Hope in Autism. Jeremiah, an eighth grader at Jefferson Middle School, was diagnosed with autism when he was three years old. I spoke with Mallory Robertson about Jeremiah and the process of creating the book.

“When Jeremiah was around nine months, I knew he was different. He didn’t point, he didn’t wave, he didn’t do the nonverbals that most kids do. He was also infatuated with letters and learning and colors and shapes. If you asked “where’s the circle” he could point it out at nine or ten months. At first I just thought he was going to be a genius.”

By age one, Jeremiah still didn’t have any words, and Robertson became concerned. She consulted with his doctor, but since Jeremiah was communicating his needs in other ways, she was assured that he was fine. When she saw the number for an early intervention service on television, she called and they did a screening. It was determined he had a speech delay, so he began receiving speech therapy.

Robertson saw an interview with Jenny McCarthy on Good Morning America, where she was discussing her son’s autism diagnosis, and started to wonder if there was more going on with Jeremiah than a speech delay. Robertson contacted his speech therapist, and a team that also included a school psychologist and social worker evaluated and observed Jeremiah, which led to a diagnosis of autism. The family was living in Michigan at the time, and they were able to enroll Jeremiah in a small preschool specifically for children on the autism spectrum.

Robertson wanted Jeremiah to learn how to deal with change in his environment, something that is often difficult for children on the autism spectrum. “At home I would change the furniture around, almost on a weekly basis, and do things to shake up his routine. He had a routine, but I wanted him to know change is going to happen and you need to adjust.” Jeremiah has had to become accustomed to new places, as the Robertsons moved from Michigan, to Carbondale, to Florida, and now have settled in Champaign-Urbana. He’s been in public school settings throughout, and has been successful, despite a setback in his second grade classroom in Florida. “His teacher wasn’t the best at being empathetic. He singled Jeremiah out a lot…The Florida schools weren’t the best situation for him. They didn’t have a lot of resources…I challenged them a lot, and I don’t think they liked it.”

Jeremiah has been here in Champaign schools since the third grade, and has generally excelled in normal classes and participates in wrestling, band, and National Junior Honor Society. He also sings in his church choir.

The book idea began a journal of memories. During a car trip, Jeremiah started bringing up all sorts of memories from his childhood, and Robertson started typing them into her phone. “We put it in a Google Doc, and we all kept putting our input in, and over time it turned into a book.” Jero’s Journey is meant to be a resource for helping children understand Jeremiah, and other kids on the autism spectrum. When Jeremiah began third grade in Champaign, his resource teacher organized a whole school effort to educate the students about who Jeremiah was and why he may do things differently. Those students have now gone on from elementary to middle school with Jeremiah. “Just bringing that awareness has made his journey a lot easier,” says Robertson. “We wanted it to be for other kids to have that awareness of what autism is, how children on the spectrum can feel. We talk about what autism can look like and Jeremiah’s experiences of feeling sad when he’s not understood. I wanted teachers to understand; I kept thinking back to that second grade teacher.”

Robertson wants people to understand that “no one person with autism is the same, and I want them to know that Jeremiah is an overcomer. He’s had a lot of obstacles, but he doesn’t give up.”

As we’re all facing this giant obstacle of COVID-19 and the stay-at-home order now, I wondered how the Robertson family — they also have a nine year old and two year old — was dealing with it on their end, and how Jeremiah was handling a major change in routine and absence of school and activities.

Roberston laughed, “Believe or not, everyone is doing well except the two year old. Jeremiah is doing pretty well…we’ve been a little more lax with when he goes to bed, he has limited video game time…if he was in school he wouldn’t have any video game time. We’ve tried to incorporate some academics into his day [this was before Unit 4 began online learning]. He’s learned ‘if I get it done now, then I can do what I want.’”

Mallory Robertson recently did a read aloud of Jero’s Journey in honor of Autism Awareness Month. You can find it here. Jero’s Journey can be purchased on Amazon or through Prince Robertson’s website Guiding Motivations.