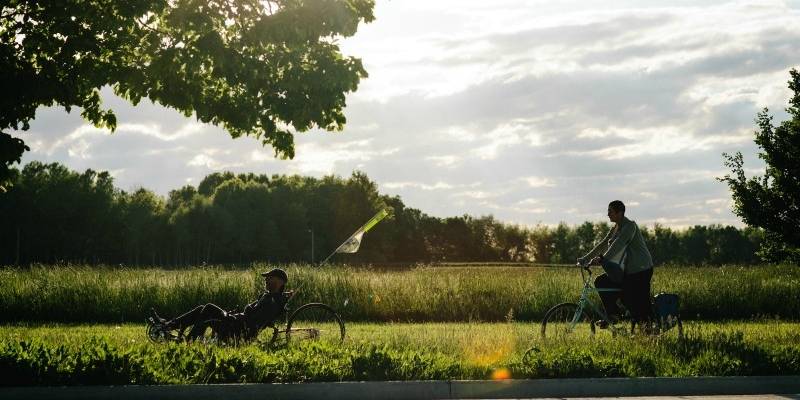 According to the story I heard a few years ago, when Cliff and Marie Channell approached beloved local midwife and cyclist Ray Spooner for permission to put together an annual bicycle race in his honor, Ray said it had to be long. Ray’s wife Rae Spooner was there and described it similarly here in 2018.

Thus it was at this time last year I and 182 others from five states signed up for Ride for Ray, and in Ray’s honor I rode the longest route. Last year’s ride raised a record $20,000 for ALS research and had route lengths to accommodate all skill levels —15, 30, 62, and 124 miles, as well as a three mile family ride to ride sponsor Industrial Donut, which gave every kid a free donut.

This year the race was scheduled to be held this Saturday, June 13th. Registration opened on February 7th, but in mid-April the race was cancelled for 2020 in light of the pandemic. Of the 38 early registrants only two requested refunds, and with the remaining fees and additional donations roughly $9,000 has been raised in 2020 sans ride. Even so it is disappointing, for ride director Cliff Channell expected around 200 riders and hoped to raise $25,000.

Ray died in 2016 from ALS, but before that set out to ride 3,000 miles across the country raising money. Ray’s Little Ride eventually raised more than $100,000 for ALS research, and although it didn’t go quite as planned, his spirit and perseverance did much to touch the hearts of those in this community and across the country.

This weekend many in the community are still thinking about Ray and the importance of continuing to search for a cure to ALS. To that end, they are promoting the Ride For Ray Gran Solo using the Ride for Ray 62 and 124 mile routes (which are 100 and 200 kilometers, respectively). These are unsupported solo rides you can schedule on your own time, and in addition to promoting the longer distances, Cliff said that “just any ride really would be great for awareness.” The event page suggests that riding any ride anywhere in Ray’s honor is a good idea, and includes some very important suggestions for solo unsupported rides.

Andy Kubiak, who won the 124 mile race last year, and whose mother has ALS, has issued a challenge regarding the 62 mile course. For every second faster by which you beat his best time on the 62 mile Strava segment (a smoking fast 2:35:30, which averages out to more than 22 mph) he will donate a dollar toward ALS research. I have a few Wild Card Cycling teammates who beat that time in the 62 mile official event last year (Kubiak was off winning the 124) but that was in a group, so I suspect his money is pretty safe.

I asked Rae Spooner’s thoughts on how the need to ride solo would have compared to how Ray would have done it, and she said “I think that Ray rode on his own because he enjoyed the time alone to just get inside his own head, and he didn’t have to communicate with other people. I think the social distancing that people are going to experience on this year’s unofficial ride might allow other people to do the same thing. It was all about getting into his head and doing whatever he did inside there — a lot of thinking.”

Last year the night before the ride they showed R.S., Ethan Grinburg’s moving documentary about Ray’s Little Ride, which you can rent or buy from Amazon Prime. Rae had this to say about that screening and the ride the next day:

“I think one of the things that happened after showing the movie, it gave people a sense of connection to the ride that they might not have otherwise had, and in that way allowed them to get inside their heads and to think about things as they rode. I think that was probably the most moving part of showing the movie beforehand. It gives people a real connection of why we’re riding for Ray.”

Now during the social distancing of the pandemic, when we’re all getting inside our own heads perhaps more than we ever intended, we are probably doing the hard work of learning to be alone, and be ourselves, and still laugh and find comfort in where we are. This is work that Ray did and Rae is still doing.

“We promised that we would laugh every single day, and we did. When I gave a speech to the Portland MDA, I didn’t speak for very long, but I did have a slide show and I picked out pictures from Justine [Bursoni]’s collection of 2,000 pictures [some of which can be found here], and every single one of them had a picture of us laughing. Whether it was me and Ray, or Ray and other people, it kind of demonstrates that ‘This all sucks, but it’s part of life, and we lived it to our fullest,’ even when his life was declining. He taught us all to live while dying.”

As is detailed on the Midwest Cycle Club website, when Ray first met Cliff, Cliff complained about riding in the weather here and Ray said something to him that he would never forget. He said, “There’s always an excuse not to ride; it’s too hot, it’s too cold, it’s too windy. Just ride!”

I think we should all do it. We should all get on our bicycles this week and ride for Ray. If you want more context, maybe rent R.S., and of course feel free to donate, but mostly, get out, get inside your head, and “just ride.”