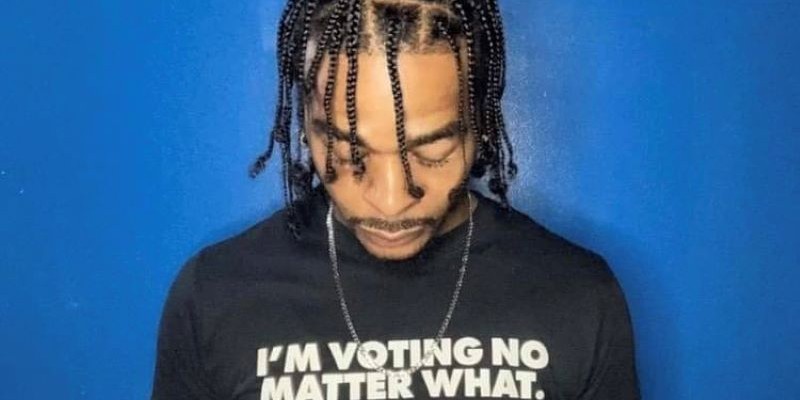 Justin Micháel Hendrix was born and raised in Champaign, and became a familiar name in the community last year. First as an activist, then because of a battle to get his name on the ballot as a candidate for Champaign City Council District 3 in the consolidated election this April. Hendrix faced challenges to some of the signatures on his ballot petition; signatures that he obtained through good faith efforts, but ultimately kept him off the ballot after the electoral board accepted just enough of lawyer Rochelle Funderburg’s challenges that he fell short of the amount needed. You can read what our editorial board had to say about this here.

Hendrix hasn’t given up his fight. He’s filled out the necessary paperwork to declare himself a write-in candidate, and will continue to campaign for District 3. As a resident of District 3, I wanted to find out more about him and his motivations for seeking public office.

Hendrix was born and raised in Champaign, was a member of Don Moyer Boys and Girls Club, and was inspired to pursue activism and advocacy after participating in the Beats program, founded by Dr. William Patterson at the University of Illinois. There he found connections to education, art, and technology through hip hop, and learned the importance of representation. Says Hendrix, “I learned about different historians and people in advocacy and then that really intrigued me into getting involved, speaking out, and making sure that we’re heard at all times, not just in the sense of being underprivileged, but in the sense of being found and known as Black people that we are here.”

He’s been involved in advocacy work statewide with Equality Illinois, and nationally with GLAAD, and has recently been very active in the Champaign-Urbana community through his organization HITNHOMEBOY. In a summer filled with marches and protests, Hendrix joined fellow activists in leading the charge here in C-U. In partnering with other justice-oriented organizations like Paign to Peace and the Champaign County Anti-Racist Coalition, he’s gone beyond marches to bring needed services to the community.

“I’m just making sure that we engage in a way unlike any other that they’ve seen in Champaign at large. We can provide resources at a great turnaround time compared to most organizations or agencies here because we offer a 365/24 hour access with our pantries and community closets, the way that we ignite into the streets with people like Rita (Conerly) and Drake (Materre) and Paign to Peace and CC-ARC, how we were able to captivate the city and make sure that we stand our ground when it comes to marginalized bodies, people that need resources, the homeless, and the underprivileged. We want to make sure that we are eliminating those disparities that keep us back socioeconomically.”

Hendrix is now looking for a seat at the table with those that are making decisions that affect his community. Inspired by fellow activists Conerly and Megan McDonald, and their respective bids for Champaign Township Supervisor and Urbana City Council Ward 5, he sought candidacy for Champaign City Council District 3. For Hendrix, the quest is not about him, it’s about giving a voice to those who don’t typically have one: “A placement in the seat means that Gramercy, Countrybrook, Garden Hills, and Holiday Park now have a place in city council.”

I live in District 3, but it’s obvious to me as a white woman who enjoys a fair amount of privilege that I’m not likely intimately aware of some of the serious issues that are facing other residents in this district, especially those in the neighborhoods. Hendrix sees those needs up close. “My focus is education, advocacy, and community culture. There is a wide population of Black housing out here that are underprivileged because they don’t have proper internet access, which means that when it comes to remote learning, they are now further behind…so that’s a big disparity.” He’s also concerned with lack of access to resources such as healthcare and social services. “Living in my district…I can walk to three liquor stores that are within proximity of five to ten minutes, compared to me walking to a health clinic that’s almost 30 to 40 minutes by foot.” He also hopes to bring more awareness to the needs of the elderly and those who are disabled, as well as LGBTQ+ and Black communities.

Hendrix wants to facilitate more political involvement within the Black community. “There is a huge population of Black people who are in this population of District 3. However, they are not registered voters, so that is a big issue because we are not educating our community as a whole about things such as politics, local politics, policy, and local government…we’re not equipping our citizens with their rights as citizens.”

With his name not appearing on the ballot this spring, Hendrix plans to campaign throughout District 3, encouraging voters to write his name on the ballot, while continuing his advocacy work in the community. He’s working with pantry creator Marshall Allston-Yeagle to add more food pantries around C-U, adding to those already in place at 102 N. Neil Street, 402 East Park Street, and 319 Louisiana Avenue. There is also a community closet in Urbana, next to the IMC building.

You can follow Hendrix’s work at the HITNHOMEBOY Facebook page. Election day for the consolidated election is April 6th. You can find out more about your voting options here.