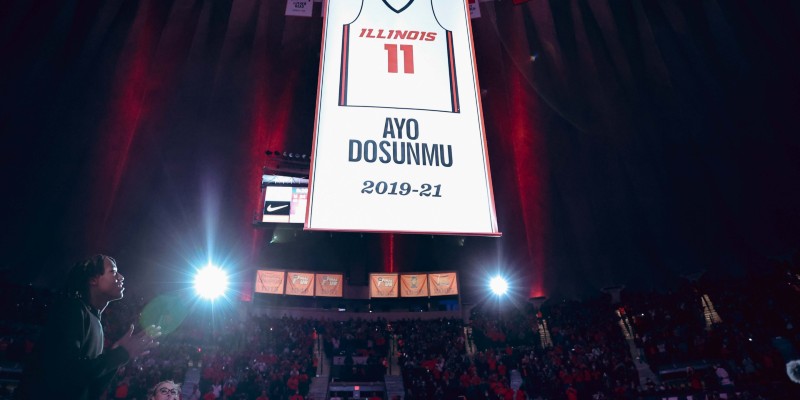 On January 6, 2022, 12,981 fans watched as former Illinois guard Ayo Dosunmu’s number 11 jersey was raised to the rafters at the State Farm Center. Dosunmu’s jersey was the 34th jersey to be included in the University of Illinois’ Honored Jersey Program, which recognizes the Illinois’ best athletes over the course of Illinois Basketball’s 116 year program history. The honor is a rare, prestigious achievement, as Dosunmu is the first athlete to be honored since Dee Brown, who played for Illinois from 2002 to 2006. However, despite the achievement’s rarity, Dosunmu certainly showed he was worthy of the honor in his three year college career.

Over 90 collegiate games, Dosunmu averaged 16.7 points, 4.8 rebounds, and 3.9 assists per game. This impressive career statline included a 2020-2021 season where Dosunmu put up 20.1 points, 6.3 rebounds, and 5.3 assists per game becoming the first player in 11 years to average such numbers. The incredible season effort is what led Illinois to a Big Ten Championship and a season ending ranking of number two in the country. Looking at the college basketball landscape today, Illinois is now a strong contender to go far the the NCAA tournament, the pinnacle of collegiate basketball. However, this was not always the case.

Just five years ago in 2017, Illinois Basketball was in the midst of a great shift. They had just hired head coach Brad Underwood from Oklahoma State that past spring under a six year contract to replace coach John Groce. Groce did have a positive win-loss record of 95-75 in his five seasons with Illinois, but only made the NCAA tournament once. Groce’s tenure had been part of a much larger program struggle, where the team had failed to make it to the NCAA tournament seven out of the past ten years. This was a stark contrast to when Dee Brown was still playing for the program in the early 2000s, when Illinois winning deep into the tournament had become an annual occurrence. In order to regain the success they had, they needed another player of Brown’s caliber.

Only seven months after the hiring of Underwood, Illinois got its next big step in the right direction when Dosunmu announced his commitment to the school in October 2017. The senior from Morgan Park High School in Chicago’s south suburbs had been making a lot of noise in recruiting circles leading up to his commitment. He had led Morgan Park to a state championship in 2017 as a junior which garnered him strong four star status and rank #36 for all players in his 2018 class according to ESPN. With such talent, Dosunmu had no shortage of colleges calling his name. Among them were Kansas, USC, Wake Forest, and Brad Underwood’s former program Oklahoma State. Despite these high profile offers, Dosunmu chose Illinois due to its proximity to home. When SB Nation interviewed his father about the decision, he said, “We want Illinois to be on top,” cementing the idea that Dosunmu was going to help turn the program around.

Though Dosunmu was talented, this did not mean his freshman year went without struggle. The 2018-2019 Illinois team was young, and in the early stages of their climb back to the top. Illinois finished the season with 12 wins and 21 losses, their worst record since 1975. Even with a team performance that left more to be desired, Dosunmu was still projected by many to be ready for the next level: the NBA. Many suspected that Dosunmu would at least test the NBA waters after his freshman season to see where he stood among the best, but to the surprise of many he did not, setting his sights on his sophomore year at Illinois.

With the help of the newly recruited seven foot center Kofi Cockburn and an overall more seasoned team, Dosunmu’s sophomore year was the antithesis of the year prior. Behind Dosunmu’s team-best 16.6 points per game, Illinois soared to a 21-10 record, earning them rank 21 in the nation and their first NCAA appearance in seven years. After pulling off a close win against Iowa to close out this season, Illinois had momentum going into the tournament they had waited so long to reach, and then the pandemic hit.

In the midst of daily life being turned upside down, Dosunmu had his future to assess. The NCAA tournament had been canceled, and the NBA was still calling Dosunmu’s name. The NBA had always been Dosunmu’s dream, but the pandemic made the decision to enter the draft more complicated. With seasons cancelling and the world still adapting, Dosunmu withdrew his name from NBA draft consideration and announced his return for his junior season. His return to Illinois immediately put the team in the conversion of the nation’s best basketball programs. On returning to college, he stated “I need that national championship,” and he had put Illinois in a prime place to get it.

As predicted by analysts, the 2020-2021 season was Illinois’ best in recent memory. The team plowed through regular season opposition, entering the NCAA tournament as a title contender with a 24-7 record and a Big Ten Conference title. Dosunmu finished averaging over 20 points and six assists per game, earning him the Bob Cousey award for best collegiate point guard in the country. When the tournament began, Illinois was ranked as a #1 seed team, meaning they were in the best position they had been since 2005 to get that national championship.

Illinois did not win the tournament, getting upset by Loyola Chicago in the second round. It was a disappointing defeat in the short term, but the long term precedent was set. Illinois may not have won the NCAA tournament in 2021, but thanks to the winning culture Dosunmu helped foster, they will have a serious chance to do so in 2022 and beyond. His individual success with the team has made Illinois a destination for new top recruits such Andre Curbello and Alfonzo Plumber who will be able to continue Illinois’ team success long after Dosunmu has left.

After his junior year, Dosunmu entered the 2021 NBA draft where he was selected by his hometown Chicago Bulls 38th overall. The Bulls themselves are going through a shift of their own, entering the height of their years-long rebuild that has put the now rookie Dosunmu in an important role on a high level team. Even with a strong Bulls team, the road to a championship is still long, but if Dosunmu’s time with the Bulls goes anything like it did with Illinois I suspect he will reach the end sooner rather than later.