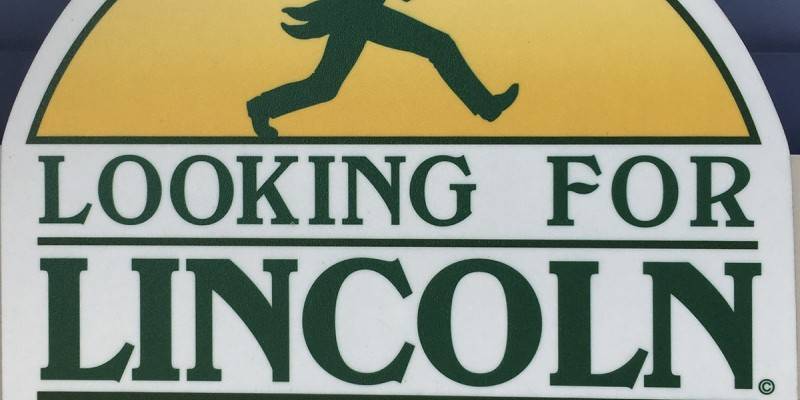 A little over ten years ago, markers topped with a distinctive yellow and green “Looking for Lincoln” logo began cropping up all over Central Illinois. The markers come in different shapes and sizes, but what they all do is tell the story of Abraham Lincoln’s connections and experiences with people and places throughout the region.

It all began in 2008 when the U. S. Congress created the Abraham Lincoln National Heritage Area, comprised of 43 counties across Central Illinois. It also includes the Lincoln-Douglas Debate sites at Freeport in Northern Illinois and Jonesboro in the far south.

Champaign County boasts eight markers: two each in Urbana and Mahomet along with single markers in Champaign, Tolono, and rural locations near Homer and St. Joseph. We caught a glimpse of the one in Champaign, “Champaign’s Lincoln,” in a previous article on historic churches in the community. I thought this week we would go looking for the rest.

Urbana and Mahomet were the first to receive markers in 2008; the other locations in the county were installed the following year. Detailed descriptions and images of each marker, along with information about the people and organizations that sponsored them, can be found at the Historical Marker Database website. Our first stop is “Urbana’s Lincoln,” located at the southeast corner of Main and Broadway by the County Courthouse (and sponsored by Friends of the Courthouse).

The upper section of “Urbana’s Lincoln” tells the story of Lincoln’s numerous cases heard at the courthouse when he was a lawyer working the 8th Judicial Circuit (1841-1860). The lower section includes a facsimile of an autographed court document along with anecdotes about Lincoln’s activities and the local connections he developed while staying in the county seat during court sessions.

One block west at the southwest corner of Main and Race, the “Lincoln and Photography” marker stands in front of Busey Bank. The upper section has a sketched image of Lincoln sitting for a portrait with photographer Samuel Alschuler in 1858. Alschuler’s studio was on the second floor of the Lowenstern Building, which was located where Busey Bank is now. A description given by judge J. O. Cunningham about Lincoln’s attire and demeanor is related. The bottom section features an early photograph of Lincoln and describes the importance of Lincoln’s pioneering use of photography for political imaging. This marker was sponsored by the City of Urbana.

The “Champaign’s Lincoln” marker is located on the west side of First street, just north of the Police Station along the parking lot. This one has three sections, with the top featuring a photo and brief history of the “Goose Pond Church” on the site where Lincoln was known to have spoken. The middle section describes the events of September 23-24, 1858, when Stephen Douglas and Lincoln gave speeches at the fairgrounds in Urbana. The pair had engaged in the fourth of their famous debates at Charleston the previous week. They were scheduled to meet next in Galesburg on October 7th. Lincoln arrived at what was still “West Urbana” by train, where he was met by enthusiastic followers at the Doane House.

The lower section of “Champaign’s Lincoln” has an image of the Doane House and a map showing its location, along with that of the “Goose Pond Church” and the “Cattle Bank,” which had just recently been completed at the time of Lincoln’s visit. It also describes the many close friendships Lincoln had with locals in the rising railroad town that would become Champaign. This marker was sponsored by the State Historic Preservation Agency and Looking for Lincoln Heritage Coalition.

Our next two markers are along County Highway 14 on the east side of the county.  About a mile south of St. Joseph, between County Highway 12 and the Salt Fork, you will find the “Lincoln at Kelly’s Tavern” marker on the north side of Highway 14. Joseph Kelley purchased a cabin at this location in 1849 and turned it into a popular stopping point along the old Bloomington Road. Sponsored by the Village, Township and Citizens of St. Joseph, this marker tells Kelly’s story and remarks on his relationship with the circuit riding Lincoln.

About three miles east of the Kelly site is “On the Bloomington Road/The Clark Neighborhood.” It is located on the south side of Highway 14, just west of South Homer Lake Road (CR 2575 E). It traces the development of the first state road to be built west out of Vermilion County (originally the Fort Clark Road). The route was approved by the General Assembly in 1826 and surveyed shortly thereafter. Lincoln would have travelled on this road going from the courthouse in Urbana east to the Vermilion County courthouse. The marker describes Lincoln’s connections with early residents of what was then known as the “Clark Neighborhood,” much of which is now Champaign County Forest Preserve District’s Homer Lake Preserve. It was sponsored by the Homer Historical Society, Champaign County Forest Preserve, South Homer Township, and the Village and People of Homer.

Two more markers are located on the west side of the county in Mahomet. “Lincoln’s Mahoment/Mahomet’s Lincoln” is on the south side of U. S. Route 150, just east of First School Early Childhood Center and about a mile and a half east of the Sangamon River bridge. This marker has two sides. “Lincoln’s Mahomet” (west side) tells the story of Mahomet’s founding as “Middletown.” It features an early plat map of the area and highlights the importance to two pioneer families who operated a popular tavern near the site, the Bryans and the Davidsons.

The east side, “Mahomet’s Lincoln,” tells the story of local cattle baron B. F. Harris, one of the largest landowners in the county at the time.  It also mentions several other local friends of Lincoln and highlights the history of some of the earliest churches in the area.  This marker was sponsored by the Village of Mahomet.

North of Mahomet on Illinois Route 47 you will find “Champaign County’s Lincoln” outside the Museum of the Grand Prairie entrance.  It features a large portrait of Lincoln and provides a general overview of Lincoln’s connections and activities in our county.  It also includes a photograph of the courthouse at the time when Lincoln was practicing law.  In the 1860 election, every township in Champaign County except Stanton supported Lincoln.
This marker was sponsored by the Dodds Family Descendents of Benjamin Franklin Harris.

The final marker in our county commemorates Lincoln’s last public address in Illinois, delivered at a brief stop in Tolono on his way by train to Washington, D. C. for his inauguration.  “Lincoln in Tolono” is located on the east side of U. S. Route 45 on the south side of town, just north of the railroad overpass. On February 11, 1861, Lincoln’s train stopped here at the intersection of the Great Western and Illinois Central railroads. The words of the short speech he from the platform of the presidential car are included on the marker.

The marker features an image of the Marion House Hotel and Depot that once stood at this site. It also tells the story of a young local girl who had met Lincoln at the hotel a month earlier while he was waiting for a connection to visit his step-mother near Charleston. This marker was sponsored by Businesses Encouraging & Supporting Tolono (“B.E.S.T.”).

These Champaign County “Looking for Lincoln” markers, along with 30 more in neighboring counties, are part of the Looking for Lincoln Story Trail. More than 200 markers can be found along the Trail, and each features a unique “rubbing medallion” that can be used to document your visit. These markers make for some great family road trips.  They can also be enjoyed virtually at the Historical Marker Database website.