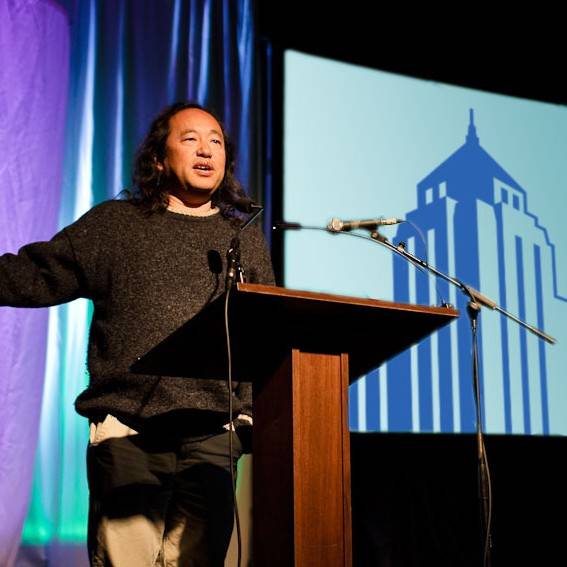 I attended the first Pecha Kucha event last September and was very impressed. The Canopy club was full and there was still a line of people around the block waiting to get in. The crowd was receptive and the presenters were a diverse group of creative talent that included a set designer, an artist, a mathematician, a pair of guerrilla knitters, and a Taco Bell wedding. And there wasn’t a dull moment in the two-plus hour event.

So right after the premiere of the first Champaign-Urbana Pecha Kucha night, I signed up to present at their next event. Little did I know that I would be given the first slot and end up staring down at a standing-room only audience of 400-plus people. Was I nervous? You bet. Was it worth it? Absolutely.

Pecha Kucha (pronounced pe-CHAK-cha) is a global phenomenon taking place in over 250 cities around the world. Brought to Champaign-Urbana by the energetic people at CUDO, each Pecha Kucha event has about a dozen presenters. Each presenter is given an opportunity to show 20 slides for 20 seconds each and talk about their work. Originally invented for designers and architects to showcase their work, Pecha Kucha night has now expanded to include all kinds of creative people who want to tell their story.

When I was notified in December that I was selected to present at Pecha Kucha Volume 2, I was very excited. My loosely written proposal said something about making a relationship between the opposing concepts of work and play and putting forth the concept that work could be fun. The general idea was to convey somehow that the more you play, the more creative you become.

So I began by making a list of all the things I love to do. With only 20 slides, I had to be selective about what to include and what to throw out. Travel and exploring the world was on the top of my list, but no one wants to sit through a slide show of someone else’s vacation pictures. Cooking and eating well was also high on my list, but I had a hard time relating that to graphic design. So I ended up just tacking the food topic onto the end of the presentation, and the vacation pictures were edited to include only images that relate to graphic design.

Then it came time to prepare images for the presentation. The presenters were given detailed instructions on how to prepare the images and in the end, I submitted a combination of stills and animated sequences. Distilling several decades of graphic design work down to a few slides was a challenge. So I chose the “fast-forward” method of flashing several hundred images on screen for only a fraction of a second.

Sequencing the slides was also a challenge. So I had to write an outline that went along with the images. The outline affected the sequencing and the images affected the outline. So there was a lot of back and forth tweaking that went on for several days before the sequence finally jelled.

The slides were due five days before the event, so I focused on refining the visuals first. Once the slides were submitted online, I breathed a sigh of relief and got down to refine the narrative. Having a stop watch helped a lot, as the narrative can’t go over the 20 seconds per slide time limit. So some ideas had to be edited down and others stretched out a bit.

I had to make a choice: should I use note cards or not? The presenters who didn’t use note cards at the first event seemed more authentic and spontaneous. Those who read from notes didn’t seem as dynamic. So I chose to go without notes. This meant rehearsing a little bit more and doing some memorization. In the end, I thought this was the right choice because what worked at home for 20 seconds didn’t work on stage. There was a need to constantly adjust the narrative to synch up with the slides.

About a week before the event, the CUDO people invited all the presenters for a meet-and-greet. This is where we found out who was presenting and what their topics were. We were also given a tour of the Canopy so that we wouldn’t freak out on the night of the performance.

The presenters were allowed to request whether to go on stage earlier or later. I chose to go on earlier thinking that I’d be more likely to enjoy the rest of the show if I got my presentation out of the way first. Little did I know I would be up first. Although this sounds a little scary, the emcee (Andy Warfel) did a great job of warming up the audience. So by the time I was on stage, the audience was ready and receptive.

One thing that surprised me a little was not being able to see the audience because the auditorium was dark. But I definitely felt the audience, as the energy of 400 people can definitely not be ignored. I have no memory of exactly what I said on stage. In retrospect, the presentation was almost like an out-of-body experience. I could almost see myself presenting on stage from the audience, so I’m pretty sure I wasn’t really in my body. I do remember screwing up the timing several times and skipping over material I thought was important. But in the end, I’m pretty sure the audience didn’t care. Instead, the best moments were when the audience got the jokes, and of course, the applause at the end. At home, the six minutes and 40 seconds went very slowly. On stage, it was over in a flash.

The best part of being a presenter was getting primo reserved seats right up front. So for the rest of the show, I had a great view of the other presenters to follow and like last time, I came away really impressed at how amazing our little community is. For Volume Two, the CUDO people once again curated a wide spectrum of talent that included an illustrator, a mad scientist, a publisher, a pair of goat cheese farmers (who wrote their entire presentation in rhyme), and many more. But my favorite presenter this time around was photographer Bryan Heaton, who showed a series of images that were both funny and disturbing at the same time. The audience reaction was simple shock and awe. (For a complete the list of presenters, go to http://www.pecha-kucha.org/night/champaign-urbana/2).

Once again, I left the event reminded of what a great community we live in and how lucky we are. For a small town in central Illinois, we’ve got some amazing creative talent in our midst. And I would not know have known about most of these people were it not for Pecha Kucha.