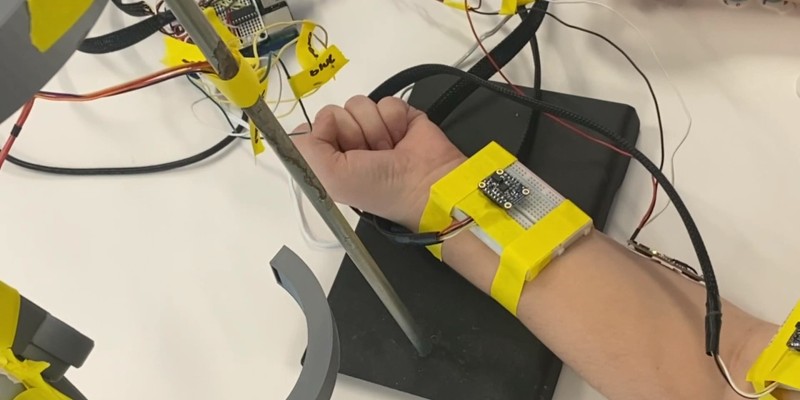 The a-ha moment for Dylan Mann came during a visit with his family. Mann’s eldest cousin, a teenager, has cerebral palsy, and movement can be difficult for him.

“All three of my cousins come flying out the front door bounding and leaping trying to run to come greet us,” said Mann. “He’s able to get around pretty well but running is difficult for him,”

One of his cousin’s symptoms is spasticity, or abnormally tight muscles.

“I can remember as he grew up, first learning to walk and first learning to talk, some of the adaptions and changes they had to make for him to be able to do those things,” said Mann. “But at the end of the day, he’s done exceptionally well, and he really can do most all the things everyone else his age can.”

Mann is a fourth-year medical student at the Carle College of Medicine. Mann, along with two-dozen other medical students at the school, is taking part in a capstone project before graduating. The project asks students to create innovations in medicine. For Mann, he saw his innovation running right to him.

“I watched as both his younger siblings quickly outpaced him, and it dawned on me,” said Mann. “I saw that his knee was just not working.”

Mann realized he had an opportunity to help his cousin and other people like him walk and run more easily. Some people with cerebral palsy rely on an uneven gait when running that involves swinging their leg to the side to compensate for difficulty bending their knee. Mann knew he could help his cousin correct that gait to run just as well as his younger siblings.

“We’re looking for people who have a lot of spasticity in the extensor muscles, more so than in the flexor muscles,” said Mann. “So, straightening their knee is not as hard but they have a lot of trouble with bending the knee because those big powerful muscles that help you straighten your knee out are constantly fighting as you’re trying to bend the knee.

Mann’s background is fitting for the innovation he devised. Originally planning to become a prosthetist, he earned his undergraduate degree in biomedical engineering from the University of Iowa. Ultimately, he decided to pursue medical school to work more closely with patients and is specializing in physical medicine and rehabilitation.

He came up with a bionic knee: a wearable device that would provide a little help to the knee each time it was supposed to bend.

“We spent quite a bit of time, a lot more than a lot of the other capstone groups, just in our design process,” said Mann. “We knew what we wanted to do, but we needed to break it down to how we were actually going to do it.”

Luckily, medical students aren’t working alone on their capstone projects. Mann enlisted the help of another medical student, undergraduate engineering and business students, and an MBA student. Most of the team was recruited, but one member jumped at the idea when he first heard about it. Patrick Parkes is a student pursuing a Master of Business Administration virtually through the university’s iMBA program. As part of his studies, he was given the opportunity to choose from the capstone projects to help with one.

“This project really spoke to me because it’s serving the cerebral palsy community, and I am an individual with cerebral palsy,” said Parkes.

Parkes said he filled a lot of different roles with the team. Primarily, he provided business insight on how to make Mann’s dream a reality, but he also provided some validation to the team that their project was needed.

“I felt like I could potentially add a lot of value to this project,” said Parkes. “Being someone with cerebral palsy, having been in those rehab settings, and interacted with a lot of equipment and methods that go into physical therapy.”

Though that is where the innovation began, the bionic knee isn’t just for people with cerebral palsy. Mann said its uses were wide and varied. “You can develop muscular spasticity in a variety of ways,” said Mann. “It could be from a car accident, a stroke, any sort of brain injury can result in having a lot of spasticity,”

The team’s innovation could be used in any number of situations, like rehabilitation. Parkes said the reason the project spoke to him is that it could be used in the real world. “I’ve seen a lot of these cool innovations happen within the bounds of institutional settings, rehab settings, hospital settings, university settings, but I think the biggest gap is providing these kinds of technologies that are accessible to everyday families and not just as part of research studies.”

Many innovations that were originally designed to make the lives of people with disabilities easier have also made the lives of able-bodied people easier. Parkes said the bionic knee could be the first step towards something much greater.

“Oftentimes things can be designed as a solution for someone with a disability and creates a better user experience for everyone,” said Parkes. “I benefit from automatic doors, just as much as new parents pushing a stroller. I think we can all benefit from innovations that make the world easier to navigate.”

The knee is far from a finished product — Mann and Parkes said the team is still in the prototyping phase — but taking an idea and proving that it works means just as much to them. “The device in its current state certainly isn’t ready to be put on a patient and have them go walking across the room,” said Mann. “But what it’s able to do is illustrate what we’re doing and show that the concept behind the device works, and that’s really what our goal was for this past semester.”

The Carle College of Medicine is highlighting other innovations coming from this year’s capstone projects. To learn more, visit medicine.illinois.edu/newsroom.