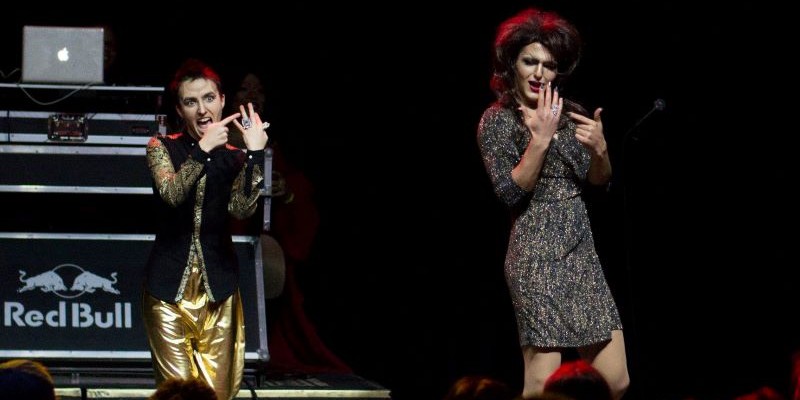 On Thursday, drag performers from Champaign-Urbana and beyond will gather virtually to tell the story of a Jewish queen who saved her people from a massacre. On its face, it might seem like an unlikely topic for a drag show, but the story of Esther — the basis for the Jewish celebration of Purim — and the drag experience actually make a lot of sense as companions. Illini Hillel’s Purim Drag Show has become an integral part of making their organization one that welcomes LGBTQ+ students into the fold.

The fourth annual celebration, featuring RuPaul’s Drag Race Season 5 winner Jinkx Monsoon, is going to look different. That goes without saying nowadays. However, the spirit of the gathering remains. I spoke with the show’s producer, Claire Katz-Mariani, about this year’s celebration.

Smile Politely: Can you tell us about yourself, and how you became involved with the show?

Claire Katz-Mariani: I am currently a senior undergraduate student at the University of Illinois. I am studying community health and theatre, and I’m getting my MPH (Master of Public Health) next year, also from the U of I. During my sophomore year I was approached by the reform rabbi at the time. He asked if I would be interested in helping out with this event, because I had expressed interest in Hillel’s LGBTQ+ programming. I said “yes,” and then I blinked. and suddenly I was president of a student group called LGBTJew. One of the biggest events that we now do annually is the Purim Drag Show.

SP: Purim celebrates the story of Esther. For those who aren’t familiar with it, can you share about the story and why this is a prominent holiday in the Jewish tradition?

Katz-Mariani: Absolutely. I will preface this by saying that I identify as a reform Jew, and I am also not completely literate in terms of the Torah and all of that, but I do know my basic Jewish stories. So basically the story of Esther, or the Book of Esther, details a woman who is set up with King Ahasuerus, who is looking for a new bride after his previous wife “embarrassed” him…and I could go into more details but this is just an overview. The real juicy part of this story, is that Esther is hiding a secret, and that secret is that she is Jewish. And in this society, being Jewish is not accepted and is actually potentially could cause her to be put to death. The king’s advisor is very threatening and tries to kill all of the Jews. This forces Esther to “come out” as Jewish and beg the king to not follow through with his adviser’s plan. And ultimately she does convince him, and they live somewhat happily ever after.

It’s really one of our most important holidays, in my experience. It’s also historically been particularly important to the queer community and the Jewish queer community, because it’s a story about telling everyone who you are, being proud, and in a sense “coming out”. And it’s always been a holiday where people like to get dressed up, wear bright colors, and be festive. We felt that a drag show would be a perfect way to encompass all of that joy and celebration. as,

SP: What about else about the story lends itself so well to a drag show?

Katz-Mariani: Purim is also a very scandalous story. It’s about secrets that get exposed, and
opening those secrets up to the world. That just lends itself very naturally to drag. People have a lot of fun with it, and it can get raunchy if you want to get raunchy. It depends on your angle and your audience, but t’s really versatile, and it just fits really well into the idea of pride.

SP: You’ve been involved with putting on this production in the past, and now obviously, it’s going to be a very different type of experience. What has the process has been like adapting this for our current virtual world?

Katz-Mariani: Our primary goal in past years has really been to engage the local community specifically and support local pride efforts. But this year, because we’re online, we’ve been able to expand that to a national platform, which is amazing. Also, in past years we’ve held it at a local venue. This year, of course, we’re holding it online and figuring out how that works and how we’ll be able to maintain the joy and sense of community that is naturally brought about during a live performance. It has been difficult, but it’s also been really rewarding. We’re at the point right now where everything is really starting to come together, and I’m really proud of the way that it’s turning out thus far.

I will say, a constant has been the general goal of this event. In past years, we wanted our local community to walk away knowing or understanding a little bit more about the relationship between religion and queerness, and that they can and and do mix. That is still something that we want to impart. Also just that it’s not an unreasonable expectation to feel not just welcomed, not just tolerated, but rather celebrated in every religious space that you enter as someone who identifies as LGBTQ+. That’s something that will never change regardless of the format of the program.

SP: Historically, religious institutions and the LGBTQ+ community have not always had a symbiotic relationship. Beyond this event, how has Hillel been an inclusive space for students?

Katz-Mariani: Illini Hillel specifically has been absolutely amazing, beyond my wildest expectations of how they support my efforts and my fellow students efforts to promote LGBTQ+ equality and celebration in a Jewish space. There have been hurdles, because it’s really important to all of us not to deny the fact that historically, religion and queerness, as you said, haven’t always mixed, and students and staff and many other groups of people have had experiences that we don’t want to negate. So our goal has always been to make Hillel as safe and welcoming of a space as we possibly can, and that means shouting loud and proud that we support the LGBTQ+ community and that they are a valuable addition to our community as it is. And like I said, truly, the staff has gone to so many lengths to support what LGBTJew does. I’m just eternally grateful for their support.

SP: Who is involved in performing in the show each year? Do you have the same performers that have been coming back year to year? What can viewers expect from the performance.

The general outline of the show involves a dramatic retelling of the Purim story with those drag performances tied into various themes and plot points interspersed throughout the show, if that makes sense.

SP: You said in the past for the live shows, people are encouraged to dress up, and there’s kind of this whole atmosphere to it. What do you encourage folks to do that are gonna be watching from the comfort of their own homes, to get the full experience?

Katz-Mariani: They are, of course, encouraged to dress up. This should be fun, celebratory, joyous. The goal is just to celebrate everyone together as they are. We have a mixture of both live and prerecorded elements, so there will be a mixture of what we’re watching, but, I would just say come as you are and enjoy the show in whatever way — within reason — that you would like to!

SP: Is there anything else that people need to know?

Katz-Mariani: Yes, there is. In order to attend the event, you do have to register ahead of time. Then you’ll get a customized Zoom link to access the show.

Also, the really wonderful part about going national is that we’re able to support an organization, JQ International, which advocates for LGBTQ+ Jews around the world. The event is totally free to attend, but if you would like you can donate during the event.