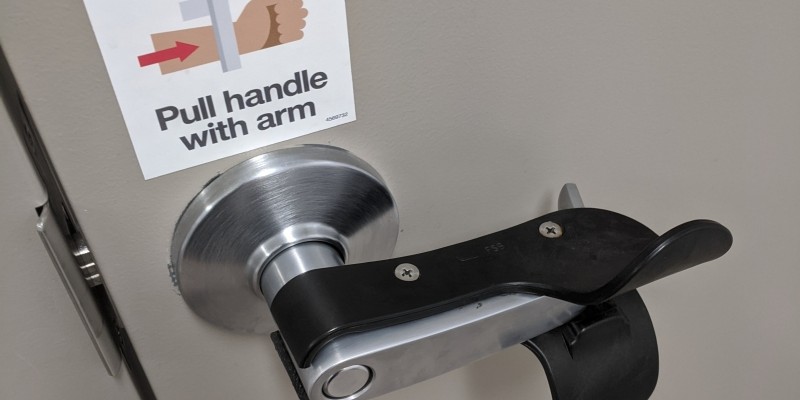 Hello dear readers. Now that I’m fully vaccinated such that I feel semi-comfortable entering public restrooms, it’s time for THE TRIUMPHANT RETURN OF: A BUILDING, A FEELING, AND A LATRINE. Let’s get right to it!

Green Street near campus has gone through a whole lot of changes in the past few years. Many new buildings have gone up, some decent-looking, others quite fugly. Today though we’re going to take a look at one of the older buildings still remaining on Green.

30 E. Green Street is currently a liminal space. It exists between the total wasteland of the vacant lot near the train tracks, and the newly constructed apartment next door. How it has remained when everything around it is in some state of change remains a compelling mystery to me.

From a distance, Hot 105.5FM, Wild Side Smoke Shop, and the offices of Thomas E. Standley, DMD, P.C. all still appear to reside here, however, my 90 seconds of internet research indicates that all these businesses have relocated. 30 E. Green St. is nothing but an empty husk, albeit a husk that is still seemingly wheelchair accessible.

Behind the building we’ve got some pretty normal building stuff.

If you explore the narrow alley between 30 E. Green and the new apartment complex next door, you can get a glimpse of the original brickwork. Lookin’ good!

I assume this building is not long for this world, but who knows. I’ve been surprised in the past. Maybe a whole new radio station, smoke shop, and dentist office will arrive and thrive in this space for years to come!

VERDICT: Well, one thing’s for sure, the view from 30 E. Green is much different than it was a few years ago!

Before the pandemic, friends would sometimes invite me out to trivia nights at bars. Pretty much every night of the week some bar in town was doing trivia. I would usually decline these invitations saying, truthfully, that I’m woefully bad at trivia due to the fact that I’ve never seen a single movie, looked at a single globe, or payed attention to a sport of any kind. On top of that, I’m illiterate, and despite having a bachelor’s in History, the only past events I can speak confidently about are certain important episodes of Hey Arnold.

But, when a friend recently invited me to Thursday Night Trivia at Pour Bros., I agreed to go. Surely I must have learned some trivial facts during the long months of quarantine right?

It was a beautiful evening and, for pandemic reasons, trivia was held (almost) entirely outside on the patio which, acoustically, was a dramatic improvement from the times I’d done Pour Bros. trivia in the past (Pour Bros. and Quality are still duking it out for the prestigious title of “most echo-y bar in Champaign County”).

There really is no feeling quite like bar trivia. The triumph of a right answer is immediately shattered as scores are read out, you realize that your team is nowhere near a winning position, and you should all get your asses back to 7th grade and learn your state capitals.

VERDICT: I will say the Pour Bros. “pour your own dang beers” system works very well with trivia nights. You can easily grab more beer in-between questions instead of having to frantically flag down a bartender like at other bars. If you’re vaxxed, still COVID-cautious, but looking for an activity outside your own house, you can do a lot worse than trivia at Pour Bros.

A LATRINE
The Family Restrooms at the Campustown Tiny-Target

As a middle-class white person, I fucking love Target. If I’m ever in a bad mood, just drop me off at the nearest Target when it’s not too crowded and don’t come pick me up until I’ve spent at least $45. As such, one of the first things I did once fully vaccinated was check out the all new, little bitty Target that opened up right on Green St. a few months back.

This Target has almost everything you can find at a full-sized Target, including restrooms! Two non-gender-specific family restrooms with fully-lockable doors to be exact.

I love Target, but usually the restroom is the worst part of any Target. I’ve been in some totally spotless Targets before, only to enter the restroom and find that the pee smells are off the charts, toilet paper is nowhere to be found, and somebody has dropped an entire unpurchased pair of cargo pants into the trash bin. Anyway, these restrooms at the adorable Tiny-Target were nothing like that. They were quite clean and included a number of thoughtful additions.

I confirmed that you can fit a whole family in one of these restrooms, but it’s still not a real family restroom without the baby changing station.

The sink quadrant has a coat hook, a little shelf to put you junk, and the soap dispenser is attached right to the mirror for some reason.

Toilet area seems quite accessible, and nearly everything in the bathroom allows for hands-free operation.

Including the door, which had this weird arm cradle thingy so you could open the door while only getting deadly germs on your forearms.

VERDICT: 10/10 I’ll happily use these restrooms whenever I’m at the Campustown Tiny-Target.

I’m taking next month off for mysterious reasons. Please have a lovely June dear readers, and start many flattering rumors about me while I’m away!