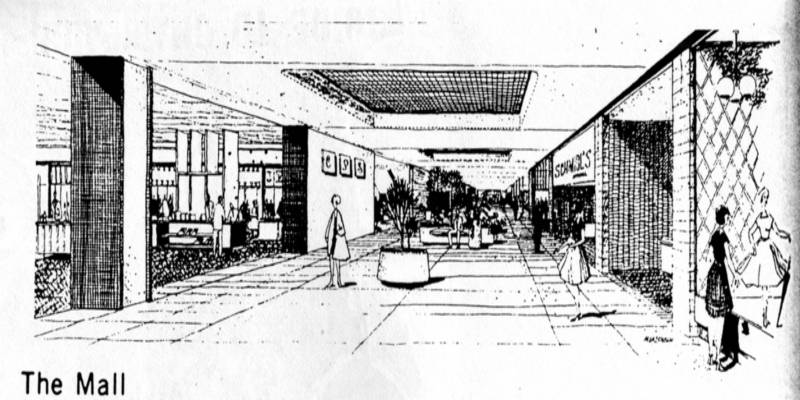 Lincoln Square Mall in Downtown Urbana is a dead mall. “Dead” meaning that it no longer serves its original purpose as a retail center for the Champaign-Urbana community. The shopping center today is routinely empty, just a few patrons wander through the empty corridors and a custodian cleans the floors before they even have a chance to get dirty. Aside from a few mom-and-pop stores, most of the storefronts are now offices, religious spaces, or medical clinics. The two remaining restaurants in the building are their own destinations, rather than oases for shoppers. Lincoln Square will not help you get the newest clothes or electronics, that’s a job for North Prospect and Marketplace Mall, but it wasn’t always like that.

In 1964, when nine square blocks of historic homes and businesses were demolished for the construction of the shopping center and accompanying parking lot, Urbana was optimistic about the shopping center, hoping that it would revitalize its downtown area. The ornate Methodist church, historic Lincoln Hotel, and Post Office were preserved and incorporated into the complex, which showed Urbana’s commitment to not forgetting about its heritage in the process of urban renewal. The pioneer of the enclosed shopping mall, Victor Gruen, was tapped to design it (fun fact: in the 1970’s, Victor Gruen showed his regret for being an advocate of American mall design and “disclaimed paternity” as the father of the modern shopping mall) and it was to be the first downtown shopping mall and one of the first enclosed malls in Illinois after Evergreen Plaza and Randhurst. Then governor Otto Kerner as well as other high-ranking Illinois officers were present at the mall’s opening, even a young Roger Ebert wrote about how his hometown’s maturing left him with mixed feelings. Urbana, like Columbus, Ohio, Council Bluffs, Iowa, and countless other cities was to not let the malls siphon business from the center city, but to let these palaces of consumerism bring more business to downtown.

For the first decade or so, this experiment worked like a charm. Carson’s was the flagship store, and the mall provided the finest shopping for C-U’s residents and the surrounding areas. The mall would regularly draw customers from Danville, Rantoul, and Decatur, who sought national brands that had not yet made their way to their towns (though Village Mall in Danville and Hickory Point in Decatur would open within the next decade). The suburban mall transplant seemed to work for downtown. The mall was vibrant and adorned with art, fountains, and aquariums.

Just over ten years into its existence, Market Place Shopping Center in North Champaign opened. It was a true suburban, auto-oriented mall with easy highway access and seemingly endless open space for expansion, it could accommodate multiple large tenants and centralize shopping, whereas Lincoln Square only had space for one anchor tenant. Market Place and the entire North Prospect corridor also contributed to the demise of retail sales in Downtown Champaign and at Country Fair.

Throughout the next few decades, big name retailers relocated and mom and pop stores struggled to retain vibrancy and life at the mall. Urbana’s grandiose development plans from the 1960s were halted and it was back to the drawing board. Lincoln Square’s last original store, Fannie May, closed in 2003.

In 2004, a plan to reintegrate Lincoln Square back into the downtown and redevelop the building with apartments, open space, and offices fell through. That same year it and the adjoining hotel were listed on the National Register of Historic Places, preventing its demolition and forcing Urbana to work around it when trying to revitalize its downtown. Thirteen years later, its future is still up in the air as Carle and Health Alliance recently announce that they are leaving the complex. Various plans to introduce apartments and modern retail space to the area have been proposed, but none have come close to fruition.

The City of Urbana officials insist that it is not a “dead mall” and that it provides a service to the community, and that it does. Other cities with disused downtown malls like Council Bluffs, Iowa and Moorhead, Minnesota have transformed their spaces into a community college and city hall, respectively. Maybe that lies in the future for Lincoln Square. Maybe a developer will revitalize the center and adjoining hotel into a newly-constructed urban village. Maybe it’s just fine as a service providing hub for food, art supplies, financial services, and non-profits and our desire to turn it into a shiny retail behemoth is unproductive. Regardless of what it does or doesn’t become, Downtown Urbana changed the game with Lincoln Square, and we have the opportunity to change the game again.