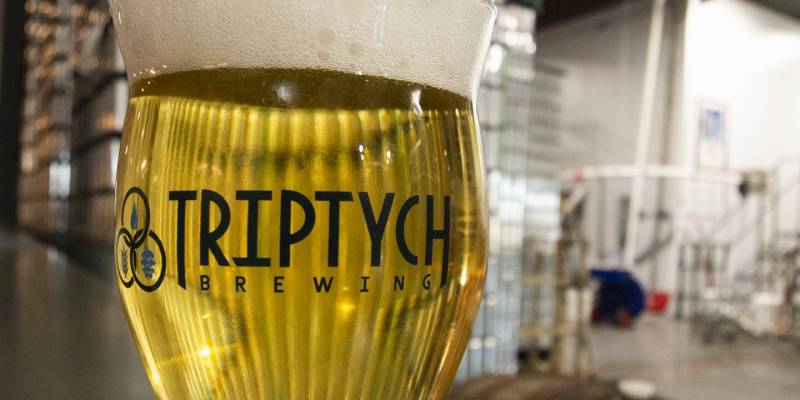 Michael Miller, Triptych’s General Manager, joined the team when it was still a young operation. With decades of experience in the food and drink industry, Miller and his crew are facing uncharted territory with the wisdom and humor that comes with working at a community-focused craft brewery.

Smile Politely: Did you have a background in craft beer before joining the Triptych team?

Michael Miller: I have worked in bars and restaurants for a significant portion of my life. I started at Mike and Molly’s. When Black Dog opened in Urbana in 2009, I started working there, and that’s where I fell in love with craft beer. I was in charge of ordering the beer, and I would get to sample the whiskeys and craft the cocktail menus.

I would order Triptych beer whenever I could. At that time, it was email based. One of the owners would send out an email, and I could pick the keg I wanted. Triptych beer would always sell really well for us. Then, I needed a part-time job, so I started working at Binny’s and did some beer ordering there. I had mainly taken that job so I could get my hands on exclusive whiskeys.

I was working at Binny’s at that time when I learned that one of Triptych’s owner had bought out two of the other owners. I emailed him and offered my sales services. I got an email back that said “Thanks, but no thanks.” I didn’t get offended by that. Triptych had only been around for 18 months at that time. About a month after my initial email, the owner emailed me saying, “You know what, let’s talk about this. I need some help.”

I started as a part-time sales representative. Instead of buying the beer, I would go out to bars and restaurants, and I’d get them new draft placement. That grew into a full-time sales job, and I started traveling around the states.

We started to grow bigger and bigger. Our sales have doubled numerous times, and we’ve physically expanded. I’ve shifted way from sales and more into running the taproom and logistics behind everything else. I’m just trying to do any job that the head brewer and owner, Anthony, is too busy to do. It’s been a fun trip.

SP: How do you come up with the names for your beer?

Miller: Sometimes the name comes first, and the beer comes later. Sometimes it’s the reverse. A lot of times it’s usually some pop culture reference or an inside joke. I think 90% of the beer names come from Anthony, but I’m able to get a few in. We have a few other inspirations around here.

A lot of movie references: like Hawaiian Shirt Day is a reference to Office Space. We have a new design that is just an internet video game reference. It’s just called “F.” Originally it was going to be a part of the Boneyard Creek Arts Festival, and it had awesome artwork on it. Because of everything that has happened, we had to throw away the label.

We each have lists of beer names we think would be awesome. A lot of mine get shot down, but sometimes they get through!

SP: Has it ever come down to two names?

Miller: Usually we know right away. Sometimes it starts out as a joke, like we have a beer called “Excuse me, sir, do you have a moment to talk about citra?” It’s a really long name. We would joke around here, “Wouldn’t it be funny if we went door-to-door asking people if they wanted to hear about citra hops?” So we ended up making that beer, and it’s been popular. We’ve made it a few times now. It was originally supposed to be a one-off joke, but we keep bringing it back.

We like to make fun of ourselves. One name I did get through was called “No Big Deal.” It’s a popular lager for us. We were just poking fun at wanting a beer we can easily drink, no bells and whistles, just a clean, easy drinking beer. Something that would be no big deal to order. It’s cool — you can abbreviate it: I’ll take an NBD please.

SP: Your can designs are great. Who does them?

Miller: Anthony, our head brewer, does almost all of the label designs in his free time. It’s nice to be able to do that work in-house. All of his labels are clean. They’re not too busy. I really like his eye for design.

Usually when I try to mess around and send him ideas, he will use that as inspiration to create something even cooler. “Fiesta Forever” was one that we didn’t have a can label for yet. We were releasing on draft only, and I made some silly Miami Vice poster. He ended up incorporating that into the label design.

SP: Does the staff provide input on beer?

Miller: Sure. We just released a draft only beer which now it’s horrible timing to release a draft only beer. But it’s called, “Luke’s Still Here, Man” named after one of our brewers. When he came on about five years ago, we asked him what kind of beer he likes and what he would want to brew. He said a Scotch ale (which is not a super popular beer), but this is the second time we’ve brewed it. We try to honor the people that work with us.

We did a “Thanks, Lyle” beer which is named after one of our owners. He’s the hammer-and-nails guy around here. He really does not like hoppy beers which is what we brew. He asked us if we could just make one beer that wasn’t hoppy. So we brewed him an amber ale that he really enjoys and is easy drinking. We get to have fun, and we use inspiration from people that work at Triptych.

SP: How has the “shelter-in-place” order impacted Triptych?

Miller: With everything that’s going on, I think we’ve adapted very well. We were able to keep all of our full-time employees, including three brewers. Unfortunately, we had a bunch of part-time tap room employees that we did have to lay-off. We’re hoping that when we open back up, we can transition more part-time jobs into full-time jobs so that we can take better care of our employees.

Right before this happened, we sent out a lot of draft beer to our distributor. We sent out like 60 kegs of Dank Meme. Usually that beer sells quickly, but they were only able to sell like 20 kegs of it. We’ll have draft beer that codes out, but I think every brewery is dealing with this. Draft beer is just not moving right now. There are maybe three or four  restaurants in Champaign-Urbana that are filling growlers.

We’ve transitioned to focusing way more on cans. Usually it would be a 60/40 split, draft versus cans, but now we’re leaning towards 90% of our business being cans. We’re filling up crowlers for people at Triptych as well. We’re doing good business. We’re still seeing amazing support from the community on a daily basis, but it’s been a big transition from draft sales to can sales right now.

SP: How has the Champaign-Urbana community responded to these changes?

SP: Where did the idea of the take-home keg come from?

Miller: Whenever you’re running a brewery, you typically do not have a large inventory of kegs on hand. You want to see a rotation — and get them out to bars and restaurants. But all of that has been halted, and our kegs aren’t coming back to us. Our head brewer Anthony had looked into these recyclable, one-use kegs. They’re made of plastic and have a bladder inside that you can fill up with beer. We were able to purchase at a low-cost by getting them in bulk. So we’re trying to fill them up and get them out to customers as quickly as we can.

We’re still encouraging customers to buy kegs from places in town like Binny’s and Friar Tuck and from our distributor because they are all sitting on inventory. So we’re trying to find a balance there as well.

SP: Do you have a favorite Triptych beer or style of beer? You said you were a fancy whiskey guy.

Miller: I still like fancy whiskeys and cocktails. I’ve always loved when we’ve done “These aren’t the blueberries you’re looking for.” That’s always been a really fantastic beer. From working here, I’ve fallen in love with our sour Memeshake series. The peach and the sour key lime were absolutely phenomenal, so I guess I gravitate towards the sour beers. I’m also a really huge fan of anything crazy double dry hopped or anything hoppy.

SP: Was there any type of beer you had not been introduced to until you started working in this world?

Miller: I would say it seemed like Anthony would occasionally bust out some obscure style I’ve never been familiar with. Like a paterspier [pronounced pay-ters-beer] which is like a Belgian beer that would typically be brewed around Father’s Day. Or at least we brewed it around Father’s Day; it’s supposed to mean Father’s Beer. I believe some monks used to brew that on an annual basis. I did like the patersbier although you don’t see it too often.

I was also introduced to some of the classic German styles that Riggs does on a regular basis. I remember when we first did a weizenbock, and I had never had one before. It’s a standard German style, but it was new to me. We currently have one available right now. Visiting the classics for the first time is what Triptych opened me up to.

SP: Triptych has grown a lot. What’s next? And has that changed with the pandemic.

Miller: We’ve cleared out the space over here, and we’re going to be redoing the floor. It’s not too exciting, but it’s been put off for far too long, and now we have the time to do it. Yay, new floor!

Eventually we’ll be renovating more of the tap room. Our plan was to close for a week at some point to make this happen. This has really made us re-envision what we’re going to do. Obviously the cash flow coming in isn’t quite the same, so when we had projected that we’d be able to get this done at some point this year and X amount of dollars would be available, that’s quickly shrinking.

Our other goal would be, once this all passes, to check in and re-establish our relationships with our customers, our bars, and restaurants and retailers we sell to. Check on them and see what we can do to help them out. See what we can do to help each other out because this has made me realize how much we need to rely on and help out each other in the community. I’ve been eating out way more than I ever have before now, just trying to keep my money local and keep visiting restaurants I love so that they stay open through this. The goal will for the future will be to do the same — really cool, fun events once we’re able to do that again safely.

SP: We’re looking forward to it!