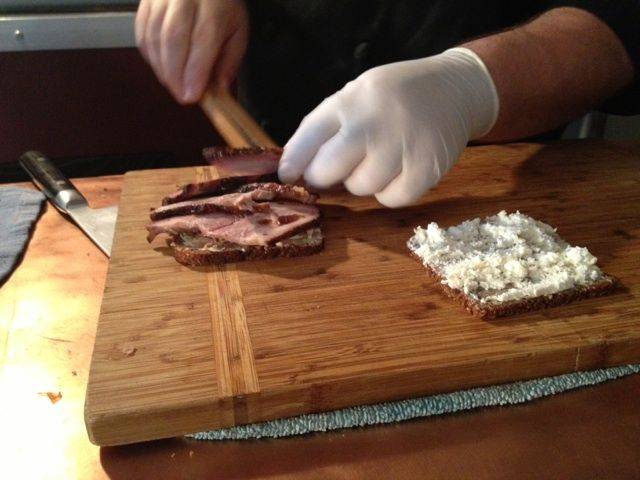 On a recent hot Monday evening I got a serious case of the hungries and decided that my summer food staples—pasta salad, lentil salad, salad salad—just weren’t going to cut it. Thankfully, that Monday happened to be August 19th, so I headed to Buvons Wine Bar (inside of Corkscrew in Urbana) for CuSP, or the Champaign-Urbana Smørrebrød Project, a pop-up smørrebrød event run by Mark Hartstein and his wife, Leslie Bettridge. Hartstein, also known as Shades, had set up shop to the left of the bar and, together with Bettridge, was preparing an array of delicious open-faced sandwiches.

Traditional smørrebrød is a buttered slice of rye bread with pålæg, or toppings. Hartstein’s approach is traditional—he makes the rye bread himself using a specially designed bread pan to achieve the uniform shape you can see in the photos—with some departures. The menu that night included a bahn mi version of smørrebrød, with roast pork, liver paste, pickled radishes, mayo, Sriracha, and cilantro. There was a gravlax (salmon cured with salt, sugar, and herbs) and pickled beets version, with Prairie Fruit Farms goat cheese, as well as one with Marcoot Creamery Gouda and lingonberry jam. I had all three, and found them to be delicious, especially when paired with a glass of Buvon’s featured house white (it was crisp and Italian). Buvons, by the way, is a hidden treasure in and of itself, if you’re looking for a quiet and elegant wine bar

Sitting down with Hartstein at Bunny’s a week after CuSP, one thing immediately becomes clear: the dude loves pickles. Pickles are Hartstein’s gateway food and can usually be found on all of his pop-up menus. I had been to a few of his events before, without really knowing it—he’s worked with Black Dog, Buvons, Crane Alley, and Cracked food truck, along with a number of private events. His menus are always a little different and have ranged from tacos to smørrebrød to ramen to fusion hot dogs with kimchi (I ate one). Hartstein got started with the food scene after he moved here to attend graduate school for English and dropped out. Both Hartstein and his wife have been cooking professionally in town now for twenty years (Hartstein is currently the pastry chef at Common Ground in Urbana). He picked up the nickname Shades from Pi Omega Omega, a non-campus-related downtown Champaign fraternity, and it has stuck. Around 2011, he noticed that

pop-ups were becoming a thing, and wanted to be Champaign-Urbana’s “pop-up guy.” Hartstein’s taste and interests run the gamut, and he likes that pop-ups allow him to move from obsession to obsession, without having to make the same thing year-round (this is of course excepting pickled items).

Ask Hartstein about his favorite pop-up so far, and he’ll bring up Dumplings for Davis, a collaboration with the Cracked food truck (you may have seen their yellow truck around town) from May 1st of this year.

Dumplings for Davis raised funds for local four-year-old Davis McKay, who was recently diagnosed with Pre B Cell ALL Leukemia, and his family. Hartstein helped prepare over 900 dumplings for the pop-up event, along with bahn mi sandwiches, homemade pickles and kimchi, and beverages. An event like Dumplings for Davis shows just how important localness is for Hartstein and Bettridge. They assemble their dishes from local ingredients and companies, they feed local people, and they often donate proceeds to local causes or organizations that work to protect and sustain the community. It’s an admirable way to participate in the Champaign-Urbana food scene.

Why have you never heard about Hartstein’s pop-up events? Maybe because he prefers it that way. Hartstein is intrigued with speakeasy culture and doesn’t go out of his way to advertise his work, though he does let the various restaurants he partners with do some advertising. He has a private Facebook page, for those in the know. When I bugged him about his social media presence he agreed that it might be a good time to resurrect a forgotten Twitter account so that fans could find out about his upcoming events. His Twitter handle is @shades1227.

You may have missed out on CuSP, but on September 23rd Hartstein and Bettridge are hosting Saru Ramen, an afternoon ramen pop-up at Crane Alley. In the past, Hartstein’s ramen pop-ups have gone by the name Ramen Relief; this time, Hartstein chose the more playful event title Saru Ramen (saru is Japanese for “monkey”). The upcoming tentative menu includes a spicy miso ramen with Sun Sapporo noodles, crispy pork belly, and pork bone broth, and a vegan version with spicy minced tofu, Blue Moon scallions and bok choy, chile oil, and a sesame and soy milk broth. The event marks Hartstein’s triumphant return to ramen after a nine-month break (his last ramen event was in December 2012). He really knows his ramen, too. During our interview he quickly rattled off a few of the twenty-seven different varieties of what he calls “classic” ramen, including the popular “Tokyo-style” ramen. His versions, naturally, will be delightful twists on these classic varieties. A portion of the proceeds from Saru Ramen will go to Doctors Without Borders. Maybe I’m in violation of speakeasy culture here, but you should definitely check this event out and afford Hartstein’s food the wider audience it deserves.

If you can’t make it to Saru Ramen, you can always check out Hartstein’s upcoming food classes at Common Ground. On Tuesday, October 22nd, he’ll be leading a DIY Kimchi class, and on Tuesday, November 12th he’ll teach a ramen demo.

All photos by Pamela Saunders, except the Dumpling for Davis (by Sue Davis) and the ramen photo (by Cameron Patten).