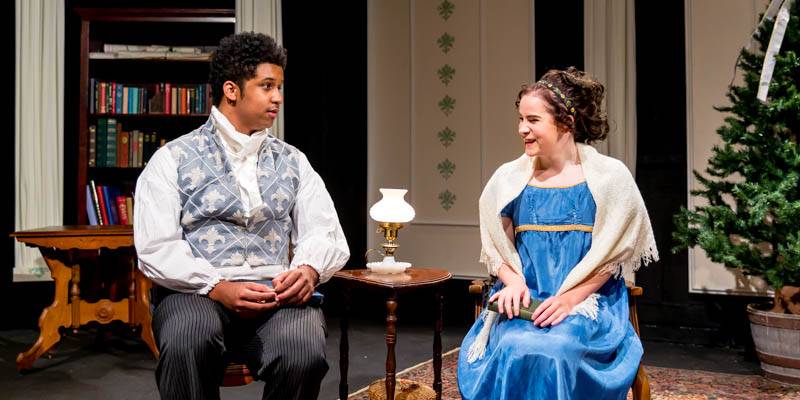 It is a truth universally acknowledged that a play with beloved characters set at Christmastime is bound to be a hit. Miss Bennet: Christmas at Pemberley is no disappointment.

I guess I should make a disclaimer that I am a total Pride and Prejudice fan. I love the characters, the story, the writing. My copy is well worn. So, truth be told, I was thoroughly looking forward to seeing my favorite characters reunite, just a little after the happy ever after I was so used to.

Miss Bennet: Christmas at Pemberley satisfied all my desires. I got to see Elizabeth and Darcy happily married. I was able to see Jane and Bingley preparing to be parents. And most importantly, I got to see another Miss Bennet fall into quick banter with a fine gentleman, who in turn falls in love with her wit and charm. The Station Theatre’s production, under the direction of Joi Hoffsommer, was truly delightful.

Dominique Allen portrays Mary Bennet with the spark and fire that I have come to expect from a young Miss Bennet. Her portrayal of a young woman dissatisfied with her current standing in life and with an overwhelming longing for something more was engaging, heartfelt, and charming. It was satisfying to see her character grow into herself, to speak up for herself and to ultimately pursue what she wants in life. It was great to see a character that was rather small in the novel take center stage to become a full and complete woman on her own.

Ashton Goodly, who plays opposite her as Arthur de Bourgh, was equally impressive, if not more so. Surrounded by the beloved characters we already know, his is the only completely new addition to the bunch. He has big shoes to fill, as Pride and Prejudice featured as a male lead the formidable Mr. Darcy himself. But Goodly holds his own, creating an awkward and adorable character we’re undoubtedly rooting for. One of my favorite parts of the evening was when he turns to Mr. Bingley and Mr. Darcy for advice on love, and they speak to him based on their own experiences with Bennet women. Honestly, that could have been an entertaining play in and of itself.

The rest of the cast was charming as well. Uche Nwansi portrayed a beautiful, kind, and loving Jane Bingley, exactly as I imagined her to be. Celia Mueller and Aaron Miller depict the comfortable and loving couple Elizabeth and Fitzwilliam Darcy. Misty Martin has a presence as Anne de Bourgh that is both commanding and charismatic. And Jenna Kohn’s Lydia Wickham was perfectly giddy. Together, they create a beautiful picture of Pemberley at Christmas.

And Pemberley itself was beautiful as well. Large cream panels surround the stage, giving the impression of the large, beautiful wainscoting of Pemberley. Simple wooden furniture fills the space, and the focal point is a gorgeous Christmas tree, which turns into a running joke throughout the play. Festive holly is hung at intermission, to really set the stage for Christmas spirit.

Running at just under two hours, with an intermission, this play moves swiftly and is sprinkled with many laughs. The opening night crowd was lively and enjoyed the sometimes subtle, sometimes over the top humor immensely. As a whole, I would absolutely recommend this to anyone who is a fan of Pride and Prejudice and its characters, as it is absolutely satisfying in that regard. Moreover, I would recommend it to anyone looking for an enjoyable, light hearted, feel good story of finding love during the holidays.

Miss Bennet: Christmas at Pemberley is playing at the Station Theatre Dec 7 – 16th at various times. For tickets and more information click here.