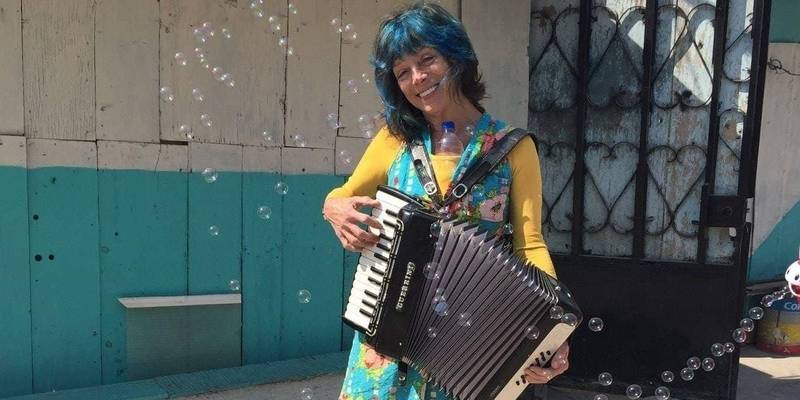 In the past several months I’ve had the privilege of meeting many of the people who dedicate their lives to living with others here in Champaign-Urbana. People who believe that through actively engaging, sharing experiences, sitting with differences, together, we can become the change we so desperately need — starting small and sometimes starting with those things we collectively enjoy. Here, in play, we may come together to learn with laughter and imagination.

Of course, the dedication to living with others is work, and even the play can be work, especially in the radical efforts of local performer, writer, and activist Susan Parenti. Entering the home of Parenti and her collaborator Dr. Patch Adams, I immediately got the sense that something was happening, and something had been happening for some time. This something was evident in the objects which curiously pulled my eyes through one room to the next. Evidence was in the dance of my intrigue. Evidence was in the air. I knew this place had stories. I knew Susan Parenti had stories. I was eager to listen. Of course, in my head, the imagined stories began the moment I started walking through the yard and continue playing out in my mind today. What all was going on here? I was curious, very curious—and I still am.

That day I was lucky enough to sit and listen to Parenti speak and I continued the conversation since then. I asked Susan some questions about when she came to Champaign-Urbana, what her practice is, how she came to make with others, and what she is up to now. While reading with Susan is a thrilling experience of its own, you can also catch her on the latest episode of the City of Urbana’s Art Now! series, or make things with her by engaging in School for Designing Society, or checking out her new play, STOP THAT.

Smile Politely: When did you come to and how long have you lived in Champaign-Urbana?

Susan Parenti: I came to Champaign Urbana in 1974 to be part of the Masters/Doctorate program in Music Composition at the Music School of UIUC. While I travel a lot, I consider Champaign Urbana to be my home. I breathe a soupcon of relief whenever I arrive in Champaign Urbana.

Smile Politely: I am inspired by the way you describe making things and how this practice of making is so important to living. What are the things which make you want to make things?

Parenti: I initially turned to music composition and piano playing as a way out of logic and out of spoken/written language. I grew up during the US invasion of Vietnam (called incorrectly the Vietnam War, as if the Vietnamese were the aggressors) and came to believe that there was a snarky connection between language, logic, killing. I turned to serious piano practicing and music composing as a way to hide from language, logic, killing. Music was the safe place under the table where no one could talk to me, as talking hurt. Piano practicing was me hiding in a benevolent tree, trying to compose music like Chopin’s was traveling in a friendly foreign country where no one knows violence.

Smile Politely: Who are the people in your life that have inspired this process and sustained practices of making?

Parenti: When I came to the Music School of UIUC, I met the composer, writer and activist Herbert Brün — a professor of composition. He had a rebellious circle of students around him; he had a wife, Marianne Kortner Brün, who had worked with Bertold Brecht and spoke up. He had a family that had all been killed in the Holocaust. He asserted that composition was traces of deliberately stipulated processes whereby the composer critiqued the current social system, and/or proposed a different desirable one. Taking my hide-away, away? I hated him for that, argued against what he said. But what chance of arguing has someone who has turned from language and logic in order to turn from killing? Suddenly the roles of composition and music and poetry and theater became hugely important, very big — but how could I hide in what is important, what is big? I wished I had never met him; I wished I had met him 15 years earlier.

In Herbert’s Seminar for Experimental Composition the circle of rebellious students argued fiercely with Herbert, fiercely with each other (this was during the US Invasion of Vietnam, remember),  but then, when there was a moment of a break, were instantly friendly and loving with each other, getting each other coffee and doughnuts. I could not understand this, not understand them. They were each incredibly friendly and inclusive to me, offering me the use of their car, of me coming over for dinner, of doing laundry at their homes. They were ardently involved in fighting against legally sanctioned terrorism — war. They wept as they watched the TV, with the bland big noses of objective reporters leading everyone by the nose. They played odd music, un-understandable poetry, would discuss something someone wrote for hours with intent attention. I could not understand this. I could understand this.

Smile Politely: How did this group inspire you?

Parenti: Here was the friendly foreign country where no one knows violence. It took years of me wanting that connection between composition and social change, but arguing against it, for me to find my life in it. I read and listened to things Herbert and his wife Manni and students wrote and composed; I composed things myself, trying to make language my friend not my tormentor. I composed processes, twisting and shaping logic — not letting it have the last word. When Einstein said, “Let’s not use the thinking that created the problem, to create the solution” he was talking about composition and activism and education, and performance.

I fell in love with this group of people, with this activity of arguing and caring and making odd things, of listening intently to something made up, of caring ardently about the well-being of the maker-upper. I’ve spent my days trying to make these dynamics, these groupnesses, these ardencies happen again and again. The voracity of a lover who has fallen in love and will not fall out.

Smile Politely: What projects are you working on currently?

Parenti: The umbrella, the nest, for my/our activities is School for Designing a Society — and we invite people to connect with us and with that. The School, established in 1991, is a project of teachers, performers, artists and activists. It is an ongoing experiment in making temporary living environments where the question “What would I consider a desirable society” is given serious playful thoughtful discussion and taken as an input to creative projects. Currently we are writing and performing puppet shows on the topic of immigration, and we perform these weekly at Urbana’s Market at the Square. We also have a weekly seminar on immigration on Sundays in October, 4 to 6 p.m., at 122 Franklin in Urbana.

Art Now! is an award-winning mini-documentary series featuring local artists, boasting over 90 episodes created over the past 8 years. A joint production by the Urbana Public Arts Program and Urbana Public Television, Art Now! airs at 6:15 p.m. every Monday on UPTV6,  re-runs at 11 p.m. on Tuesdays, and online on the UPTV6 Youtube Channel.