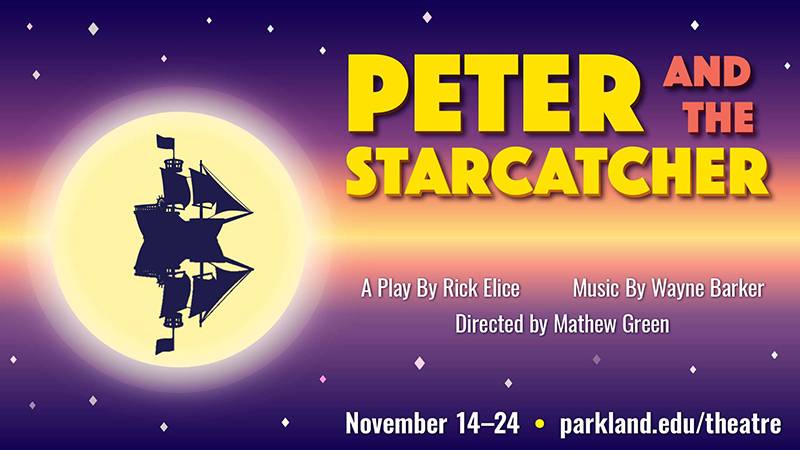 Earlier this month, I included Peter and the Starcastle in my list of must-see arts events for November. I admitted it was outside my personal theatre-going comfort zone. It also caught my eye because it was not what I expected from local director Mathew Green this season.  I’m always inspired by artists who challenge themselves, explore new terrain, and demonstrate that growth only comes with risk. Starcastle, is many things, a musical, an adventure, and a family-friendly activity. But, it also challenges our preconceived notions about the iconic Peter Pan, what he represents, and why he still fascinates us till this day.  Green was kind enough to spare some pre-opening week time to chat about this reimagining of Pan, the challenges of director a large-scale musical, and the importance of presenting a sensory-safe performance.

Smile Politely: What appealed to you most about this play?

Mathew Green: Two things, really. The first is that this is something I hadn’t done before, on a few levels, and I’m always looking for a new challenge. On the surface, it would appear to be kind of outside my comfort zone because I tend to lean into smaller-cast shows that are a bit more…mature in theme. This brightly-colored play for kids (with music!) is a departure, but it’s so full of imagination and fun that it’s hard not to get swept up and love it. The other appeal of doing this show, of course, is my never-ending quest to entertain my kids.

SP: What do you think it is about Pan that still resonates with audiences today?

Green: I think most people grow up knowing some version of the Peter Pan story, whether it’s Barrie’s book or the Disney animated film or the Broadway musical. It’s always there in the consciousness. For me, as a kid, it was the movie Hook. As for the appeal of Pan… maybe the concept of eternal youth is appealing, although that’s a double-edged sword, isn’t it? Personally, I enjoy a good pirate story.

SP: What has been the biggest surprise as a director?

Green: Honestly, the biggest surprise is how well it’s been going! The cast is doing great work, and they seem to be having a lot of fun with it; and all of the various elements that go into getting a production on its feet have come together relatively smoothly. Even when a tricky bit of blocking comes up, or if a change needs to be made, everyone involved has performed with such good cheer and team spirit. And it’s not a simple show–at all. There are so many moving parts. But all is well.

SP: What can you tell us about the music?

Green: Ah, the music. Yes. I think the biggest misconception about the show is that it’s a Musical (with a capital M, like Annie or The Music Man), and that’s a totally understandable assumption to make. I mean, we have songs and choreography and a little orchestra, so that certainly sounds like a musical. But this show fits into a very narrow category of plays that happen to include music. When the show was nominated for Tony awards back in 2012 (and won five, by the way), it competed as a play rather than a musical. It’s a subtle distinction. “Splitting rabbits,” as Black Stache would say. Anyway, all of that said, the music is integral and really supports the story. Our orchestra is conducted by Melissa Goldman, and their importance to this process cannot be overlooked. And I’m not deriding musicals here. I just want people to know what they’re getting. If you’re a musical fan, this is totally for you.

SP: It must be challenging finding an approach to the world that resonates with both adults and children? How did you approach that? Did being a parent yourself help?

Green: Big yes on the parent question. Any parent can attest to the fact that, when it comes to family-friendly entertainment, finding something that both the adults and the kids can enjoy is like finding gold. I have personally sat through some things that made my brain cry, and I’ve kept that in mind with this production. The mandate from our very first read-through has been to speak to kids without talking down to them. Luckily, this script is a good mix of the silly and and the poignant and the exciting. My kids are interested in theatre, and it’s a big part of our life, so it’s important to me that they get to see at least some of what I do and that what I can show them is worthwhile.

SP: What are you most excited for audiences to experience in this production?

Green: Wow, that’s hard to narrow down. I will say that “experience” is the right word. We’ve built a world with this show that I’m excited for people to see and experience. And the actors have brought such joy and life to their characters. If I had to pick just one thing, though? I’d say the mermaids. Sheri Doyle and her costume crew have done some wonderful work with them, and the actors are having fun with Maya Hammond’s choreography. The whole show is a fun ride, but the mermaids are going to be a big crowd-pleaser, I think.

SP: The production boasts live music, jungle adventures, and a very large cast.  What’s been your secret for keeping all the balls in the air?

Green: That’s simple: Yen Vi Green. She is an extraordinary stage manager; she’s conscientious and proactive and keeps the trains running on time. It probably also helps that we, as spouses, have a shorthand, but I know other directors also reach out to her all the time. She makes me a better director, and she makes every show a better process. She’s magic.

SP: How does this reimagining of Pan compare to other versions we’ve seen in film and TV?

Green: That’s a really good question. There are plenty of versions to choose from, and most of them have something to offer. Like the 2015 movie Pan, for instance, which I think has its problems but takes an admirable swing at doing something original. I think that’s a key component, any time you approach a story that people feel they know well. You have to put your own stamp on it. Starcatcher certainly does—both the Rick Elise script and our interpretation of it. I will say that, since this is a prequel, you’ve not going to see Peter Pan in green tights or Captain Hook in full regalia. Starcatcher introduces these characters and shows the audience how they became who we know them to be later.

SP: What has this experience taught you as a director? What have been your takeaways?

Green: I would say that it has broadened my appreciation of and respect for collaboration. I always need other people when I direct, whether it’s the lighting designer or the set designer or the props person. But this show has made me even more aware of my place as one collaborator among many. From Nick Shaw’s set to Konrad Ciolkosz’s lighting to the music and costumes I’ve already mentioned, every piece is crucial to make something like this work and to make it what it deserves to look and sound and feel like.

SP: What can you tell me about the special sensory-safe performance?

Green: This is something we’re all excited about. On Sunday, November 17th, we’ll be hosting a sensory-safe matinee. These are sometimes called Relaxed or “Lights Up, Sound Down” performances, in which accommodations are made to make the show more welcoming to patrons who might otherwise find the show difficult to sit through. The house lights will be up for the duration of the performance, for example, and patrons will be free to move around the theater or talk. We’ll also be reducing the volume of music and sound effects and addressing lighting issues to make things more sensory-friendly. The hope is to create a safe environment for families who might not ordinarily attend a show like this. This will be a first for Parkland, and I know they hope to be able to do it in the future. It’s another way to help make sure the arts are for everybody. I really hope people will take advantage of this and that people will get the word out.

Green: Just to reiterate that this show is absolutely geared towards and suitable for kids and families. Bring your kids. Bring your grandkids. I don’t think I’ve ever been able to say that about a show I’ve directed, so I’m saying it on a loop now. There’s a ton of theatre going on in this community pretty much all the time, and I find that so inspiring. This is our effort to inspire young theatergoers and get them interested in seeing more plays and maybe telling their own stories on stage.