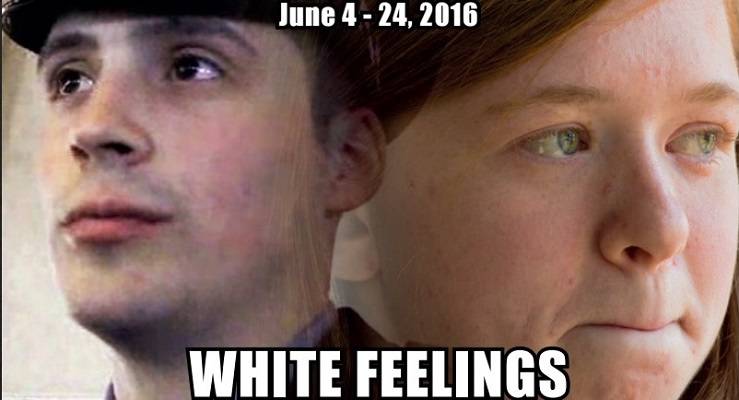 Outhaus proprietor and PhD candidate Bert Stabler is curating the first summer exhibition at Figure One gallery, downtown. When I discovered the newest show is titled White Feelings, a play on the popular snarky hashtag, I was unsure what kind of experience would be waiting for the audience: is this parody? Self-deprecation? Narcissism? With several recent shows at the University of Illinois’ commercial gallery having a political theme – from last month’s national security agency to last winter’s With Eyes Wide Open – could this be another such exhibition? The official press releases didn’t reveal much to me, so in an ongoing email dialogue with Mr. Stabler, I sought a deeper understanding of just what we can expect from the show that will open on June 4th. The best comprehension, however, came when the artists themselves began talking to me about their works.

“The show is about a lot of things at once, but they all relate to the words ‘White Feelings’, and I think that means that there are connections between these ideas, ” says the curator, helping me find an ‘in’ to the exhibition’s theme. Those words are being interpreted by over a dozen artists, both white-identified and minority, although it does skew Caucasian. “That’s not intentional,” Stabler explains, “and I’m glad it’s not more of a majority than it is. There are artists who represent Asian, Latino, and African ancestry as well.”

Adam Farcus explains his pieces in a way that demonstrate this idea more fully. “Refrain is a small store-bought, commercially produced painting from TJ Maxx that has the text ‘AVOID REALITY AT ALL COSTS’. Smoke Screen consists of two white noise machines that are installed within the gallery. […] these two artworks allow for interpretations that exemplify the act of covering up or turning a blind eye to truth when it comes to injustice, racism and exclusion. In this exhibition the concealers are understood to be white, but in a different context, these artworks would not only be prescribed to white people.”

Another concept being explored is the simultaneous desegregation and emotional flattening of contemporary art – not that the two are interdependent, but there is correlation there, at least in the timing. Stabler tells me that this show is “putting unabashedly, perhaps embarrassingly overwrought and/or confrontational works together with work that dissects emotion around race with a more critically-tolerable tone of detachment.” Later on in our conversation, he states, “I am willing to risk letting art be mushy, blunt, ambivalent, didactic, or crass.”

This dichotomy brought to mind the responses from two different artists: James Jankowiak and Michael Workman. Starting with the crass half, (Baby Crusher, pictured right) Workman tells me, “My work in the exhibit reaches back into the experience of having been gaslighted. For someone to dismiss the anguish caused by gaslighting someone, they must begin from the assumption that their feelings are naturally worth more than that of their victim. This is also, of course, in many ways the root cause of racism — the notion that other human lives are somehow less valuable than their own.” On the other hand, Jankowiak states his surprise at being considered for this show, because his work tends more toward the didactic end of the spectrum, “my

paintings and installations are pretty straightforward formalist with a focus on color interactions…metaphorically that seems like it could work out for this topic but my work is pretty non-objective and far from being political.” He goes on to describe his contribution as a white American Tourister suitcase, open and filled to the brim with onions. Having these two works displayed in the same show will definitely help explore both sides of this conversation about what is acceptable in the art world.

Edra Soto thinks so, too. As another contributing artist and former collaborator with Bert, she says, “When he told me about this project I immediately asked him to bring it to my project space in Chicago (THE FRANKLIN). I think that the White Feelings exhibition will address timely, provocative and important issues, and will instigate a great amount of reflection.” Soto’s work connects an ordinary cotton house dress to Amy Schumer in the style of a Mexican Milagros, taking the clothing full circle from beauty to rebellion to parody and back to worship, integrating an object of “other world” fascination.

Lastly, Stabler tells me that the impetus for the show was his reaction to the situation last winter regarding the “White Student Union” facebook group. A sculpture — coincidentally displayed after a rally by the Black Students for Revolution — of a white sheet with spears through it, with white hands, entirely covered in red paint splatters, was actually a monument to personal trauma and had nothing to do with the BSFR. The facebook hate-group automatically assumed it was tied to the rally, and the work of black students, and reacted without doing research. To him, this odd overlap of personal psychology and political power required exploration.

“White people want very badly to be understood and not seen as racist,” he explains, “…at the same time, I have an aesthetic perversity that wants to look at white narcissism in its horror, and acknowledge that the pleasure of looking is, for me, a form of narcissism.” That touches on one of the concepts raised in the publicity for this show: “racialized affect”, or the emotional expression of non-whites displayed for white consumption. In this exhibition, however, the emotions on display are those of white people, displayed by and for everyone.

For example, artist Pedro Velez’s submission Protest Bouquet for Rahm Emanuel (#ResignRahm) examines the contradiction between the mayor’s proclaimed love for art and the demolition of the architecturally-significant Prentice hospital. And I can’t even mention the white feelings surrounding Laquan McDonald without doubling the length of this article, so I’ll move on. Diana Gabriel’s work, Making Amends, takes a repeated look at the feelings that seem demanded of her even though she may not feel them: apologies for being a woman, having an accent, and needing to appease White Feelings.

Like our email thread, this conversation is a complicated one, but an important one to have. To that end, there is going to be a panel discussion on June 22nd, at 6 p.m. that strikes me as vital, considering the complexity of the topic. After hearing just a few replies from the artists involved, and the emotional and political drive behind its curator, I am definitely going to carve some time out to explore this exhibition and its message.

White Feelings opens at Figure One Gallery in downtown Champaign with an evening reception on June 4th from 5-8 p.m. The exhibition will run through June 24th, with a panel discussion at 6 p.m. on June 22nd. Figure One is located at 116 N. Walnut St. (between the Pig and Cream & Flutter) and is open Thursday – Saturday afternoons and evenings.

As Arts Editor for Smile Politely, sometimes rk asks too many questions and gets too far inside the subject matter she’s tackling. Yet she still believes there’s never a valid reason to stop learning, so she keeps asking and spouting nonsense @rknaur on Twitter. Follow at your own risk.

All images provided by the artists, with the exception of James Jankowiak’s selfie, pilfered from facebook.