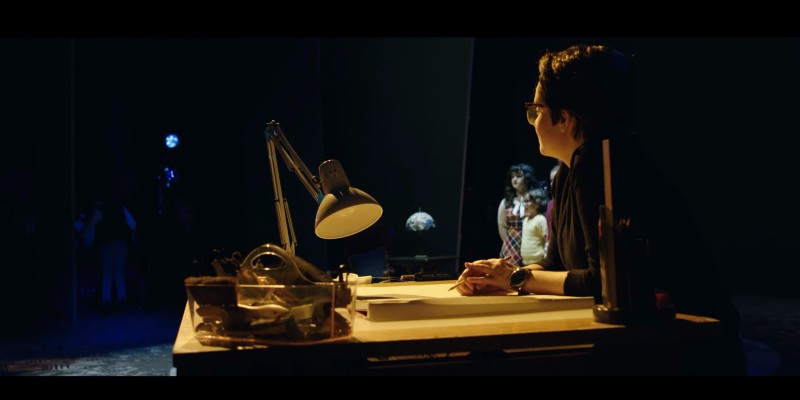 February 2020. That was the last time I stepped foot inside Krannert Center for the Performing Arts. It was also the last time the Lyric Theatre at Illinois brought a live theater performance — Cabaret — to an in-person audience at Krannert. It’s kind of a staggering thought, really. It’s been a year and a half of pivoting to online or outdoor, always socially distanced productions. However, there is nothing like sitting in a dark theater with just-right acoustics, seeing performers bring a story to life on stage.

I was thrilled that one of my very favorite musicals would be my first post-pandemic — or whatever-this-phase-of-the pandemic-is — show.  Through a complete stroke of luck after an hour of waiting in the half-price tickets line in Times Square on a frigid December afternoon, I ended up with front row seats to Fun Home, in a small theater in the round, with the stunningly talented original Broadway cast performing just a few feet away. Judy Kuhn stood right in front of me. And when your first musical love is Les Miserables, this is huge. I count this experience in the top ten best experiences of my 40-something years.

I went into the Lyric Theatre’s performance of Fun Home excited and with mixed expectations. I know the level of talent here at the U of I is top notch, but you know, it’s not front row on Broadway. However, this viewing of Fun Home hit all of the notes.

I love a memoir, and Fun Home is watching a memoir play out on stage. Knowing the story you are watching unfold on stage is grounded in someone’s real experiences brings extra gravity and meaning to everything that happens. In short, Fun Home, based on the graphic novel of the same name, invites us into the mind of cartoonist Alison Bechdel as she processes her childhood growing up in a funeral home, her coming out as a lesbian in college, and her relationship with her father who was also gay (but closeted), and his eventual death which Bechdel assumes was a suicide.

The actors in the cast brought to life the complexities of this family’s life with just the right amount of emotion and honesty. It’s a small cast, with just nine performers, which works well with the level of intimacy this story requires. It does not need a full chorus filling the stage.

Lucy Economos stood out as Medium Alison, as she shifted from an awkward college freshman on the verge of discovering who she really is yet still seeking her father’s approval, to a woman ready to shout from the rooftops about finally making that realization, to a daughter coming to terms with the knowledge that her family has never been what she thought it was. Economos’ endearing mix of self-consciousness and utter joy as she sings “Changing my Major to Joan” about Alison’s first sexual encounter was made that much better by her powerful voice.

Fun Home is a story that makes your heart ache, but writers Lisa Kron and Jeanine Tesori insert moments of actual fun into the show. “Come to the Fun Home” is where the three kids get to shine, in particular Leyla Cohen as Alison’s older brother John. The song has a delightfully 70s feel, as the kids practice their “commercial” for the funeral home, hilariously highlighting all of its fabulous features, including satin lined caskets and an aneurysm hook.

Tears welled as 10 year old Zoe Harms, as Small Alison, sang about an early inclination towards noticing women in “Ring of Keys”. Her earnestness swelled and broke my heart all at the same time, as she conveyed Alison’s knowing that she’s different, yet somehow the same as the “old-school butch” woman she sees at a diner, but not quite able to express it. She brought such a sweetness to the moment. An important piece of the production was the use of projected words and images to support the scene happening on stage, and as Small Alison sang “Ring of Keys” we saw image after image of real photographs of women who didn’t necessarily fit into the box of what our culture deems “feminine”. It was a powerful display.

Danny Yoerge as Bruce Bechdel was captivating, and he brought nuance to a daunting role. As an audience member I could feel his angst as he cycled through excitement and rage and confusion, often lashing out at his family while still showing tender moments in scenes with college-aged Alison.

The song “Days and Days” is one of my favorites from the show, as Helen Bechdel finally gets her moment to express all that she’s kept inside in an effort to be a “good” wife and mother. Sarah Durbin brought the song through its raw crescendo to a soft, quiet pleading with her daughter to find her own way.

Throughout most of the show, grown Alison hovers around the margins, commenting on her memories, struggling through her writing process. However, the wall between her and the scenes playing out in her mind comes down when her father turns to her and invites her out for a ride, the last memory she has with him. Emma Mize seized this moment as she sang “Telephone Wire”. I felt her panic rising and genuine emotion in her voice as she came to the realization that she can’t change this moment.

One of the most poignant moments of the show came at the very end, when the three versions of Alison blended their voices and perspectives in “Flying Away”.

I was so thankful to be back at Krannert for a live performance. We have a deep well of talent here in C-U and at the University of Illinois, and Fun Home was a wonderful reminder of that.