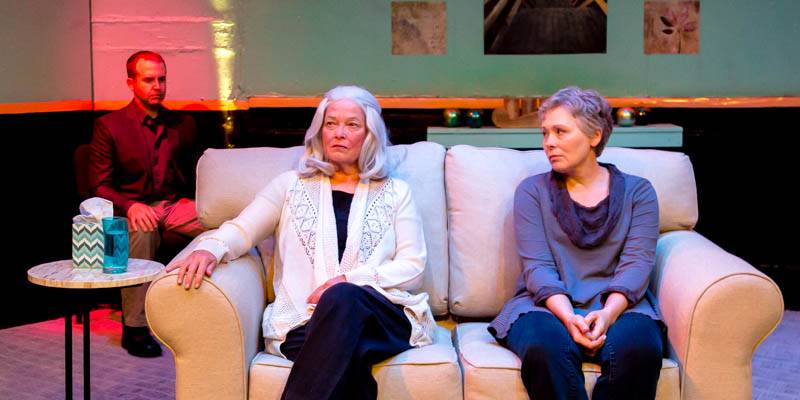 Every family dinner table has those few stories that get told again and again. Like that time your little brother got chased around the yard by the neighbor’s dog. Or how grandma said no the first time grandpa asked her out. These stories, despite how many times we’ve heard them, bring us laughter and joy each time and every time. Jordan Harrison’s Marjorie Prime explores just how these recurring stories live on, especially in a not-so-distant future where advanced technology affects every aspect of life. In the world of Marjorie Prime, it even affects the grieving process.

The play opens with an older woman, Marjorie, who has a quick wit but is occasionally a bit confused—it would appear her memory is slipping and has been for a while now. She’s having trouble remembering basic things like who her grandchildren are or how her husband proposed, but there’s a nice young man there to help her. He cares for her, encourages her to eat, and most importantly he tells her stories—ones she’s apparently heard before but of which she has no recollection. Still, they seem to make her happy. As the conversation unfolds, though, it becomes clear that there is something unusual about their relationship. He’s…her dead husband?

Well, in this version of the future, families can have “Primes”: artificial intelligence versions of their deceased loved ones. This young man is Walter Prime; he’s accumulated information about the original Walter through conversations with the family, some of whom seem perplexed by the whole prospect. His purpose in the house is often debated by their daughter Tess and her husband Jon. Is he there to pacify Marjorie? To engage her? What stories should he be telling her? Just how necessary is it to share the painful memories alongside the happy ones? Furthermore, if she can’t remember what actually happened, don’t they have the power to essentially rewrite history?

This production of Jordan Harrison’s challenging play, directed by Mathew Green, was strong in many ways, but especially with the talented cast. I found the relationship cultivated between Joi Hoffsommer as Tess and Gary

Ambler as Jon to be particularly engaging, believable and strong. Their sharp banter and witty jabs provided some much needed relief from the heavier moments found throughout the rest of the show. Barbara Evans as Marjorie was also remarkably steady in her difficult role, showcasing charming high points—like singing Beyonce’s “Single Ladies”—and poignant, softer moments. I especially appreciated her portrayal of Marjorie Prime and the honest way she posed some difficult questions.  Eric Beckley as Walter Prime was pleasant and likable, if maybe a touch nervous, but the opening night crowd ate up his stories enthusiastically.

This adept cast was matched well with the other elements of production. The costumes were appropriate and cohesive. Stuart Wilson’s lighting was subtle but effective.  And while according to the program, there was no official sound designer, I found that element to be rather excellent. At one point Marjorie recalls how she used to play the violin, as she listens to Vivaldi. As she talks, the full orchestra gets stripped down to just her old part, a staccato plucking effect, which Marjorie informs us is meant to evoke icicles. Then the full orchestra comes back, but Marjorie’s plucking is particularly resonate, and the whole song somehow sounds more complete. It’s beautiful and a (forgive the pun) prime example of how a seemingly subtle sound cue can take a moment from cute to truly touching.

The set in many ways provided a suitable backdrop, but was not my favorite. A few touches, such as a turquoise blue and bubblegum pink color scheme, were possibly an attempt at retro-futurism but ultimately felt somehow discordant with the furniture, the costumes, and the fact that the play doesn’t feel all that far off in the future. Still, I appreciated the attractive hanging lamps over the seating banks, bringing audience members into the fold of an otherwise detached, proscenium style arrangement.

As engaging as the cast was, the play forces their characters to wade through many weighty topics, and it challenges the audience to consider several difficult notions with very little relief. This sometimes made the 90 minute play feel much longer. But the issues it addresses—death, relationships, memories, loss—very clearly resonated with the opening night audience. In fact, I saw a few tears in the crowd. On the whole, this production does these hefty themes and Jordan Harrison’s lovely work justice.

—
Marjorie Prime continues its run at the Station Theatre through August 12th. More information can be found at the theatre’s website.
All images by Scott Wells.