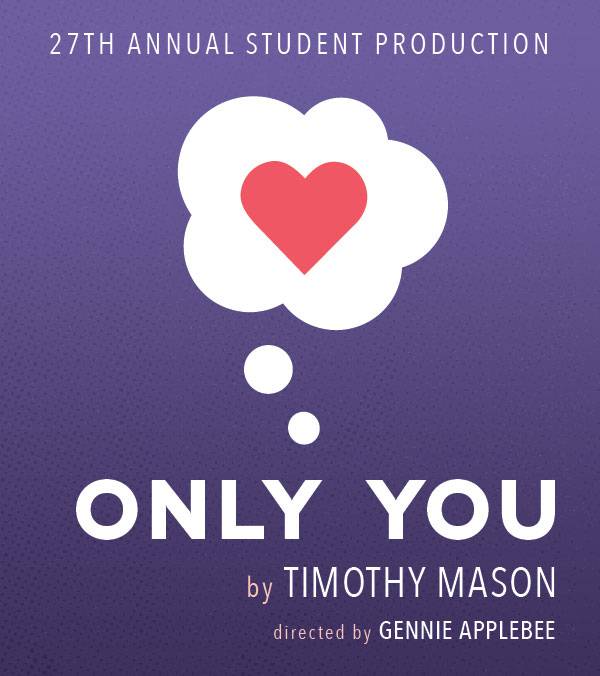 The long-standing Parkland College Theatre tradition of having one production each season that is directed and staffed entirely by students is admirable for many reasons. Among these is the potential benefit for the students on stage and behind the scenes to learn by doing. Another is the fact that the proceeds from all ticket sales go toward Parkland’s scholarship program for theatre students. So, to be sure, there are several good reasons to attend any Parkland student production.

Sadly, in the case of Only You, the 27th annual student production, there isn’t much more to recommend it.

Let me say, at the outset, that this puts me into something of a quandary. These are (almost entirely) student actors and student designers, putting on a play with the guidance of a student director. They are all still learning their craft. With that in mind, I would like to be positive and encouraging at every turn. But to write a review that merely summarizes the plot and glosses over the production’s shortcomings does a disservice to the audience and to the students who are deserving of both support and honest feedback.

It also occurs to me that a big part of the learning process in theatre, at any age, is working your butt off to produce a show that just doesn’t work. So, to the actors and designers who are cutting their teeth on this show, let me say this: Everybody in theatre has a show like this. You’ll do more, and you’ll do better. And now you have a story.

Only You is an ensemble piece; thus, the story is handed back and forth amongst the players, and the stage time is divided more or less evenly. In this sense, the play would seem ideal for a group of young actors; and make no mistake—these young actors show up to play. The actors are engaging throughout, and their characterizations are, for better and worse, consistent.

First-year actor Matt Christman has his first sizable Parkland Theatre role as Leo, a philosophizing waiter on the search for true love. Christman has an earnestness on stage that makes him compelling; unfortunately, Leo’s shallow neediness and volatility give the audience little to root for.

Maya Hammond, making her Parkland debut, plays Miriam, who may or may not be destined to wind up with Leo. Ms. Hammond has natural stage presence, and her Miriam is probably the most relatable of the characters on display. The script, however, does her no favors by having her dither over an unworthy man and finally undercutting Miriam’s moment of romantic triumph by having her zonked-out on pills.

As Heather, Zoe Dunn makes the most of a broadly comic character, but the bombardment of wacky tics and shouted punchlines leaves Heather with seemingly no interior life. She starts and ends at 11.

Jarrod Finn, the only non-student in the production, brings a bit more maturity to the role of Bo, who is described throughout the play as “depressed.” In the wrong hands, Bo might have appeared to be a cliché “sad” character. Finn, however, is genuinely endearing in many scenes, and his line delivery wrings every ounce of honesty out of the hacky writing.

As Eddie, a caricature of the “smooth operator” who doesn’t actually know anything about relationships, Parker Evans maintains an arch tone throughout that is somehow simultaneously impressive and exhausting. He seems to be having a genuinely good time with his character, and his catchphrase (“I can be”) does earn its share of laughs.

The play itself, a bit of a merry-go-round of couplings and uncouplings, is almost irredeemably bad. When the play premiered, back in the Eighties, the jokes and stereotypes therein might have seemed fresh—even edgy. Three decades later, however, the humor tends to fall flat, and its “zany” characters, sexual politics, casual homophobia, and treatment of depression would now be charitably described as dated.

Now, you might well say, “Hold on, there, Snowflake. Things were viewed differently in the late 1980s.” Indeed they were, my nostalgic friend. And I might think differently of Only You’s half-assed, TBS-sitcom-level writing if the play were presented as if it were taking place in 1987, as a “period piece” of sorts. That might have been fun—an exercise in how bad our taste used to be. But no such attempt is made here. The set is generic enough to be timeless, but the costuming and props place the action of Parkland’s production squarely in the 21st century, where references to landlines, Dr. Joyce Brothers, and “cross-dressers” are hopelessly out of place. (Side note: Can we finally and forever get rid of the “man bothers woman until she gives in and agrees to date him” plot? Please?)

Doubling down on the bad script, I’m sorry to say, is the clumsy direction. Everything on display here—from anger to sorrow to staring into the audience like a Slow Loris—is so broad as to render it grating. It is not my intention to be unfairly critical of a relatively new director. As I stated earlier, everyone involved in this show is still learning. But one important lesson for any director is that certain faults—fairly or unfairly—land at the director’s feet. The choices the director makes, whether specifically asking for a performance that doesn’t work or failing to correct one, can make or break a show.

Despite this show’s flimsy construction, the efforts of the actors and the student production program are still worthy of appreciation. Ultimately, the young cast of Only You works hard for its audience, occasionally spinning a bit of gold out of straw.