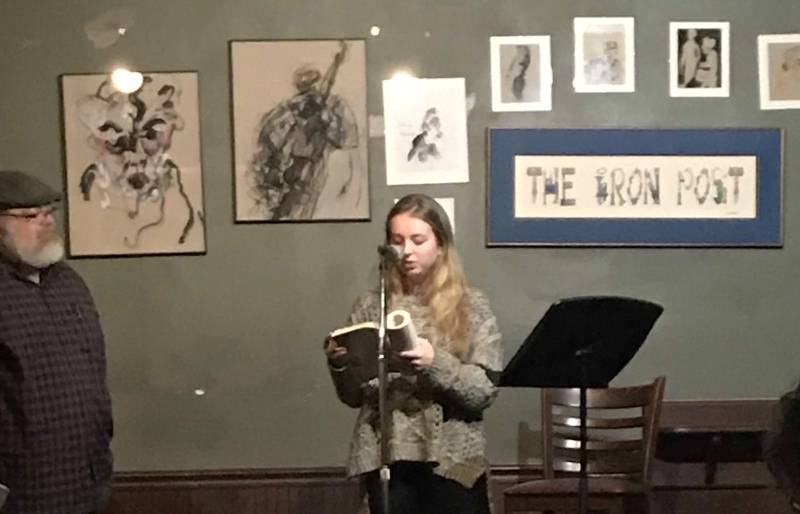 There is something special about open mics. At other events, like concerts or plays, the artist is asked to to share their art. At open mics, the artist instead does the asking; the artist offers their work, opening themselves up to scrutiny, criticism, or praise. Watching people take the stage to share their art makes me as an audience member feel very honored. Poets at the Post is a monthly open mic opportunity for poets, storytellers, and spoken word artists. The event is hosted the second Monday of each month by The Iron Post and the Champaign Urbana Poetry Group.

Typically, each month has open mic opportunities that can be signed up for preceding the event and a featured artist. This month was a little different. Instead of featuring a poet, that time was instead used for poem karaoke. To participate in this portion, one did not have to also share their original work during the open mic. Instead, the performer was able to bring a favorite poem or to find one in the poem-aoke poem book. This month, the participants were given randomized numbers and the one chosen won a copy of Emily Dickinson’s Envelope Poems.

The night was dedicated to Pat Frick, mother of a friend of the Champaign Urbana Poetry Group, Diane Frick Corean. Emcee Jim O’Brien read a poem that Diane Frick Corean wrote in memory of her mother. Following that, the open mic started. James Englehardt shared poems inspired by parenthood, from the last night of childless life in “Expecting” to the fears that having children put upon him in “Without Pause.” Will Reger used his recent interest in genealogy by writing poem “After New Jersey” in honor of his ancestors.

A favorite poem of the night, “Trashcan” was shared by Jane. Beginning with a list of items one might find in the garbage can, seemingly mundane and unconnected, she brought them all together in a narrative featuring two parents and their young child. The poem explored how though every trash can on the side of the road mimics the last, the contents can reveal a families dirty secrets. The poem gave me a familiar emotion, what some call sonder, the sudden realization that each person is living their own unique life filled with ambitions, fears, relationships, which you may never know or understand, but is all the same very real.
Another poet, Kelsey, shared a series of poems that related to her roommate experiences in college as the only woman living with three men.

The saga began with the challenges of living with a recent ex, with whom she had to share a room. It continued with her witnessing the recent ex falling in love with their neighbor, and wrapped up with the experience of subsequently realizing feelings for a friend of her ex. She wrapped up her set with a lighthearted poem about quirks you can only recognize after living with someone. One of the roommates stood their toothbrush upright against the wall of the tub. While the poet was understanding that the toothbrusher enjoyed washing their “teeth and ass at the same time,” she had to reveal that every time anyone got into or out of the tub, the toothbrush would inevitably fall into the bottom of the tub, thereby sabotaging any hope of hygiene.

After poets shared their own experiences through original poetry, poetry karaoke started. This also offered a glimpse into the artists. The audience learned which poems they chose to share, and what that reveals about their interests and their inspiration. Poems by W.B. Yeats, Edna St. Vincent Millay, Charles Bernstein, Tao Lin, Emily Dickinson, Lisel Mueller, Caleb Curtis, and Roger Reeves were shared. One participant memorized and recited John Keats’ “Bright star, would I were stedfast as thou art,” and several shared Charles Bukowski poems, which sparked conversation of having a Bukowski themed Poets at the Post. Not my first pick, but it is hard to deny that many people enjoy and relate to the poetry of Bukowski and would be open to a night to celebrate him.

Having some experience with the local poetry scene, and some of the poets who shared, I was able to see the inspirations for choosing specific poems. Poets who leaned more fantastical chose poems with a bit of magic or whimsy, those who share more confessional styles chose poets who share that same penchet. But for everyone in the audience, there were reminders of favorite poets and introductions to new poets. Poets at the Post is a learning experience each month. Finding new poets, new ideas, learning new words, or hearing of experiences that I have not faced and may never face is reason enough to keep going back.

To stay up to date with subsequent Poets at the Post, be sure to check out their Facebook page.