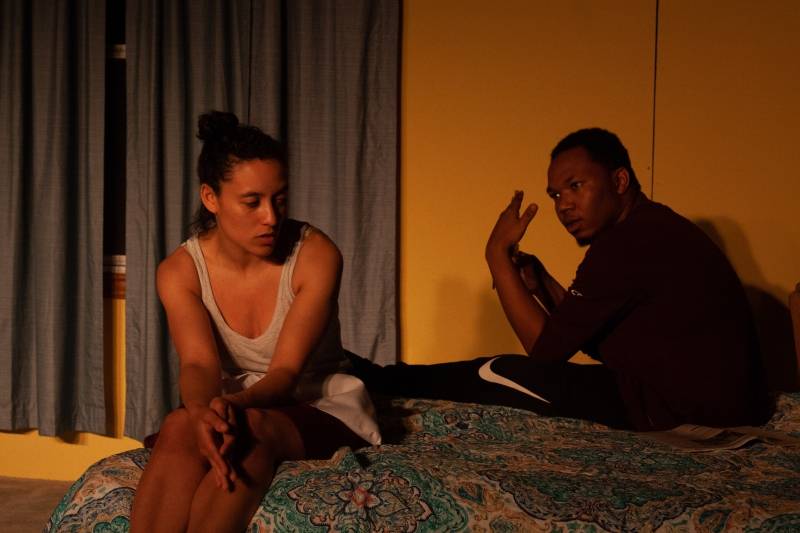 Room 306 of the Lorraine Motel in Memphis, Tennessee, is not impressive. It is drab and functional—little more than four walls and a bed. That’s what it was, on the night of April 3, 1968, to its occupant. But from the following day onward, in the eyes of the world, that shabby little motel room would become an historical landmark of great tragedy and significance.

The actual Room 306 is now frozen in time, viewable through glass at the National Civil Rights Museum, which was built around the Lorraine Motel. It has been almost 20 years since I was there, but my memory of looking at the room, at the end of a sobering tour of the museum, is of stillness. Sitting in the audience before the play began, I felt that same stillness, as though I were looking through the glass again.

In Katori Hall’s play The Mountaintop, which opened May 11th at SoDo Theater under the banner of Twin City Theatre Company, this room is presented simply: a bed, a door, a window, a couple of tables and chairs. An exact recreation of the historical Room 306 is not possible, given the limitations of SoDo’s small stage area, but precision of setting is not necessary to appreciate the drama therein. The approximation is effective. The play itself, after all, though based upon history, is a work of fantasy.

The orientation of the stage, sequestered as it is from SoDo’s sprawling interior, makes for an intimate, almost complicit experience. The sound of the rain outside is continuous, a reminder that there is a world beyond these walls. A reminder, perhaps, that there is something waiting outside.

The occupant of the room, of course, is Dr. Martin Luther King Jr., who arrives tired and discouraged. He has been away from home for too long, yet again, but there is work yet to be done. He tries to write a new speech. He tries to call home. He orders some coffee. When the coffee arrives, it is brought by Camae, a motel maid who tells us this is her first day on the job.

From there, the narrative unfolds in ways both mundane and fantastic, both expected and unexpected. They talk, flirt, and argue. They drink, smoke, and laugh. Things are revealed that would be unfair for me to spoil, but suffice it to say that the shadow of the next day’s events looms large.

As Dr. King, Cedric Jones delivers a performance that seems both respectful and honest; admirably, he manages to reflect qualities of King’s greatness without lapsing into caricature. He shows the audience flashes of King’s charm and power as well as the fear and failings just below the surface. Not an easy task, and Jones rises to the occasion.

As Camae, Kimmy Schofield shows lovely range. She is adept at being vivacious and funny, as well as wounded and real, and she portrays a woman with something to hide without telegraphing what that something might be. One might think that Ms. Schofield’s role would be the easier to play since her character is a fiction and therefore free from the context of history and collective memory. However, I think the challenge of Camae is making her the dramatic equal of Dr. King, given that they share equal time and space on stage. Schofield’s Camae is every bit King’s match as verbal sparring partner.

The actors display genuine chemistry and navigate the warmth, depth, humor, and sadness of the play with equal skill. I was particularly impressed by each actor’s commitment to character when not the focus of the scene. Both Jones and Schofield show mastery of the brisk dialogue as well as the more minute, nonverbal touches that give a performance texture.

As for the play itself, I can only say that it is a commendable endeavor. There are patches of heavyhandedness along the way, but these might well be unavoidable in attempting to dramatize such a weighty figure and moment. Hall’s script contains moving speeches, heartfelt truths, and a few real laughs, all of which make for a satisfying experience.

Much of the success of the play hinges upon a single important revelation a little past the midway mark. I will not spoil this plot point, but I will say that it put me instantly in mind of an old quote attributed to Johnny Carson: “Buy the premise, buy the bit.” In essence, it means that, if you accept the premise of a joke (or, in this case, a play), then you’ll likely accept and enjoy the outcome. I suspect that this is the case here. If you buy the premise, you will (with all due respect) buy the bit. For some, the turn of events might seem hard to reconcile; for others, perhaps the turn will seem altogether fitting. I’ll let you decide.

My only nagging quibble with the production (otherwise tightly directed by Dustin Yocum) is the inclusion, at the end of the play, of audio from the real Dr. King delivering his stunning “I Have a Dream” speech from the March on Washington in 1963. While understanding the desire to share this beautiful oration, I cannot help but consider this an unfortunate choice because, in my opinion, it undercuts the fine work of the actors—Mr. Jones in particular. For, as iconic and moving as Dr. King’s voice and speech undoubtedly are, they come after 70-plus minutes spent asking the audience to accept Mr. Jones as Dr. King, to accept his voice as Dr. King’s voice.

While others might find the audio a moving tribute and a cathartic reminder, I found it jarring, and it left me a little cold. Opinions may vary, but I felt somehow cheated, having just spent those 70-plus minutes living and breathing with Dr. King and Camae in that small room with the rain outside. I had spent those 70-plus minutes being transported by two talented actors in the moment.

In other words, I had bought the premise.

The Mountaintop, presented by Twin City Theatre Company at SoDo Theater, continues May 17th through 20th. For more information, including showtimes and ticket availability, visit the TCTC website.