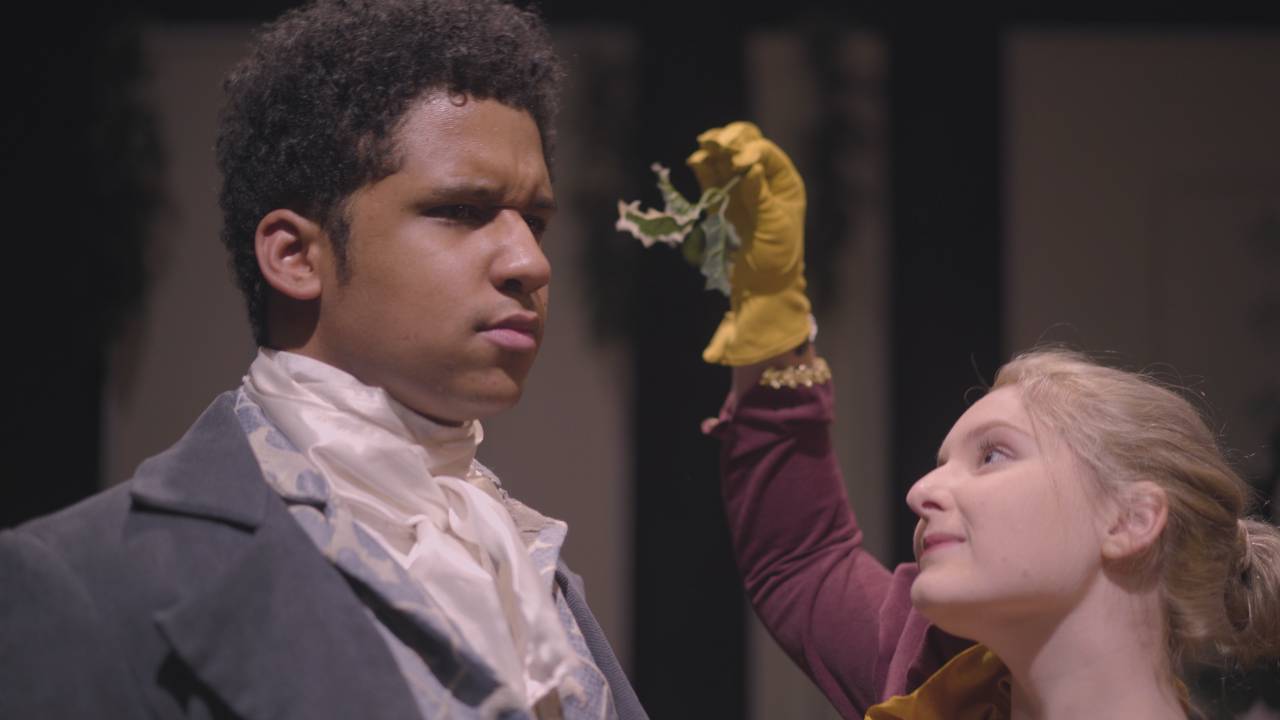 Set two years after the conclusion of Pride and Prejudice, Miss Bennet: Christmas at Pemberley reunites us with Jane Austen’s beloved characters. Unlike its predecessor, though, Miss Bennet offers middle sister Mary the spotlight she deserves. And with that spotlight, Mary shows—with hilarious wit and sarcasm— that she is no longer satisfied with the lot she’s been given or with being considered the plain middle sister.

This charming production opens in less than a week, so Smile Politely spoke with director Joi Hoffsommer, and equally charming cast members Dominique Allen (Mary Bennet) and Ashton Goodly (Arthur de Bourgh) to discuss the show and why it shouldn’t be missed.

Smile Politely: What would be a quick summary of Miss Bennet that would attract people to the show? If someone had never heard of it, sat down with you, and said ‘Joi, what is Miss Bennet: Christmas at Pemberley’ what would you tell them?

Joi Hoffsommer: I would say it is the sequel to Pride and Prejudice. Towards the end of Pride and Prejudice, Lizzy writes a letter to her family saying that you must come have Christmas at Pemberley with us. So, this is two years later and they have all arrived to have Christmas at Pemberley. And where Pride and Prejudice centered on Lizzy and her tempestuous courtship with Mr. Darcy the middle sister Mary, who is a sort of a plot device in Pride and Prejudice, she has grown up a little bit, come into her own. She’s very different than the rest of her family. They all just sort of see her as the way she always was. They don’t expect her to want anything more out of life than to stay home and take care of her parents. But she wants more out of life, and she has no desire to marry, except to have options in her life because at that time there weren’t many occupations open to woman. So, she’s not looking. Joi turns to Dominique Allen and asks, “What is that line you say?”

Dominique Allen: “I’d rather marry an interesting plant, than an idiot man.”

Joi Hoffsommer: laughs. She really likes nature, the world, and reading. Anyway, in a little interesting Jane Austen-esque twist a young man is invited to spend Christmas with them who is also extremely into books and reading, and travels the world in “ink and paper” he says. Then there’s a huge twist towards the middle that threatens to ruin everything. It has a very Jane Austen feel. The playwrights, I think, were big fans.

SP: What drew you to Miss Bennet?

Joi Hoffsommer: Actually, I was approached by the play selection committee—they were looking for a Christmas offering—and, I can’t remember who it was, someone said, “Have you read this? It’s playing in Chicago.” So I read it, and thought well, this is it. I didn’t know it before it was put under my nose.

Ashton Goodly: I was invited to do the show. I am actually quite a big fan of Pride and Prejudice. I think I’ve seen just about everything version you can see. I’ve read the book a few times. Even before this show, I’m vaguely familiar. There seems to be a lot of literature devoted to Mary Bennet in the form of feminist novels, contemporary harlequin romance, and even some fan fiction. And I don’t think that’s a coincidence. I think she’s a very sympathetic character, and why not be a part of her happy ending? Why not?

Joi Hoffsommer: Well, it was interesting. I will go in with a sort of a notion, at least a basic feel for a character, but I’m usually surprised. Someone will come in and I’ll think yeah, that’s a good take that I wouldn’t have thought of. So, I was lucky to get a very good cast. They’re fun! We’re having a good time. I love doing plays where we get to laugh a lot.

SP: Heading into the Christmas season, the typical options would be A Charlie Brown Christmas or A Christmas Carol. Why should people see Miss Bennet: Christmas at Pemberley instead?

Joi Hoffsommer: Because it’s so fun! It is charming. It is witty. It has an intelligence that is very welcome. One thing Katie [Burke, Stage Manager] says a lot is that it’s a feel good play. You don’t always need feel good plays, but it is one.

Ashton Goodly: I think it’s a play about people, and I think that is very important. It is very good to see that right now in the world. And also it’s just interlaced with that good Jane Austen wit. That’s what I love. The dialogue is very quick. It’s very snappy, and it will keep you engaged which you don’t always get with other shows.

Dominique Allen: This one is so much more fulfilling. In Pride and Prejudice, she is really not given much substance. She’s basically a foil for her sisters. I think there’s even a line in this play about how she has charming sisters and smart sisters, and that leaves only a few adjectives for her. In this one, we finally get to see her grow, and come into her own. I think, most importantly, she mentions she wants to live a full life. For her, she’s only been given the opportunity to live fully through books and through piano and stuff like that. It’s so great to see in this show she’s given the option to live fully with another person. Because as Joi said earlier, women at the time didn’t have many options to see the world alone or travel alone. But now since she has a husband, which she didn’t think would happen, she has the option to see the world and live fully.

SP: How do you relate to your character, if at all? And what do you like the most about engaging the character?

Dominique Allen: Her stubbornness for sure. Laughs. She’s very stubborn. She’s very hotheaded, and I get that. I find her frustration with life not appealing, but understandable. I find it easy to relate to that. Her dissatisfaction with life. It is fun to deal with that, and connecting how I want to grow as a person. I can definitely relate to her on that level.

She is also so sassy, and she holds her own.

Ashton Goodly: I think it’s just that he much prefers, I think, his own time. I’m somewhat of an introvert, and I relate to that. I enjoy playing with that on stage and bringing it to life in a funny, but real way. I think it’s just fun to insert myself into the regency period, and figure out how they would move, how I would talk, and how I would go about living that life.

SP: If you could give a short description of your character, more than you’d find in the actual script, what would it be?

Dominique Allen: Well, I think in Pride and Prejudice she’s given almost nothing. I think Miss Bennet does her justice, because it explains her relationships with her sisters better. Her sisters are all such strong female characters, but she’s kind of in the shadows. In this show, she’s brought out of the shadows finally, and is given a personality finally. It’s a great personality too, a really strong one. I think she’s finally given the chance to shine; she’s coming into her own. She’s discovering that she wants to live a life that is not just taking care of her parents, and doing what is expected of her.

Ashton Goodly: He’s a bit socially awkward. That’s quite alright. I think he’s a scholar, and an Oxford man. He much prefers books to people—there’s nothing wrong with that—but that life can be a bit lonely. Life happens, as it does, and that brings him across the path of Miss Bennet… And, well, you can see where this is going.

SP: What would you say to those that hear Pride and Prejudice or the characters, think it’s just this upper crust, boring British literature, and would pass it up because it’s Jane Austen material?

Miss Bennet: A Christmas at Pemberley will play at the Station Theatre December 7-9, 13-16 at 8 p.m., and December 10th at 3 p.m. Tickets and information can be found here.