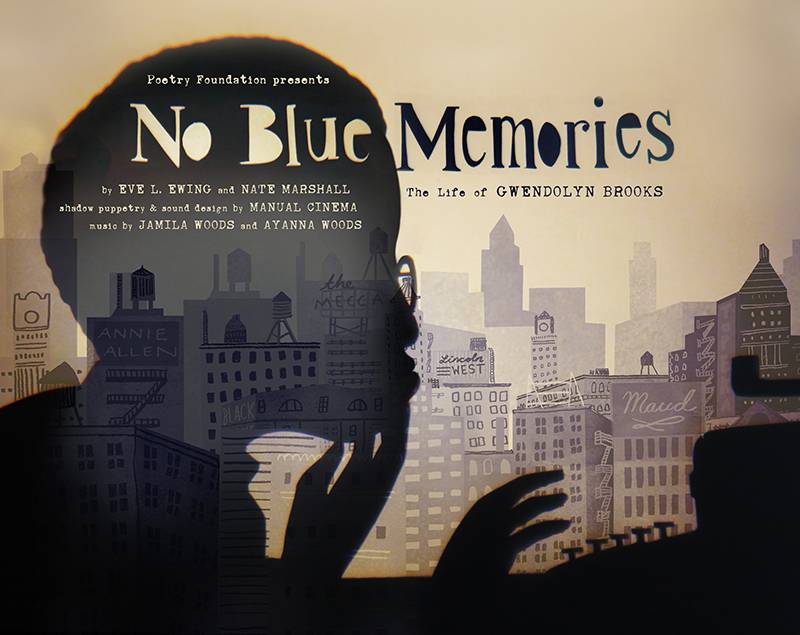 As I made my way through the crowd exiting the Colwell Playhouse on November 29th, I kept hearing the word “magical” bubble up around me. It was an apt description for an enchanting performance. Manual Cinema’s particular brand of magic is one of artistic alchemy. Their multimedia performances combine handmade shadow puppetry, old-school vintage overhead projectors (more about that later), live actors using live camera feeds, and original, live music, to create an experience that defies traditional labels. Founded in 2010 by Drew Dir, Sarah Fornace, Ben Kauffman, Julia VanArsdale Miller, and Kyle Vegter, this Chicago-based performance collective/design studio/film and video production studio “transforms the experience of attending the cinema and imbues it with liveness, ingenuity, and theatricality.”

With No Blue Memories — The Life of Gwendolyn Brooks, Manual Cinema adds the poets own words to the mix, for a journey through Brooks’ Chicago and “an exploration of  how she navigated identity, craft, and politics over the course of one of the most remarkable careers in American literary history.” The final ingredient in this spell-binding blend were samples from the author’s own papers, courtesy of a collaboration with the University of Illinois’ Rare Book & Manuscript Library.

This production was advertised for ages 10 and up, and with so much inspiration to be had, it was satisfying to see how many young people came with parents, friends, and teachers. No Blue Memories begins and ends with Brooks addressing a group of local eighth graders at their graduation. From there we meet young Gwendolyn writing her first poems at the kitchen table, trying to convince her mother that those are indeed her own words. As a young Brooks experiences her first success, a poem that wins a children’s literary contest, her joy is infectious. And despite the challenges that come, despite the years that pass, she maintains that joy in her work, dancing her signature victory dance after her own successes and those of her students. One especially compellling moment comes as we watch her unpack her beloved typewriter in her new home. The typewriter, which is brilliantly depicted with puppets dancing atop projectors, takes on character status as it speaks through the clacking sound effects and the rich sound of N. LaQuis Harkins’ voice.

Harkins’ portrayal of Brooks is pitch perfect, striking a balance between humor and seriousness, joyful innocence and experience. It is a voice we want to hear again. Vocalist Jamila Woods takes Brooks’ words to a whole new level by shaping them into surprisng melodic phrases that ask us to hear new things in words we have heard many times before.

There are two many memorable moments to include here. But I find myself circling back to the performance of Brooks’ poem We Real Cool. One afternoon Brooks observes a group of young men skipping school to hang out at the pool hall. She observes their swagger, their slang, the clear sense that school has nothing to offer them. The poem is born out of this moment, as is Brooks’ commitment to listen to black youth and to learn from them. Brooks was as wiling to teach as she was to learn and grow. She taught so many young people to value their voices and their experiences. I can’t think of a more important voice to turn to in a climate where young people too often feel unsafe, invisible, and hopeless.

The much beloved Brooks, once our state poet laureate, holds a special place in the hearts of Illinoisans and we are so fortunate to have her papers here at the University of Illinois’ Rare Book & Manuscript Library. No Blue Memories is not only a tribute to Gwendolyn Brooks, it is a powerful reminder of what can happen when artists, designers, writers, archivists, musicians, and scholars come together. They find exiting new ways to repurpose old technologies and to make us hear familiar words in new ways. They create magic.