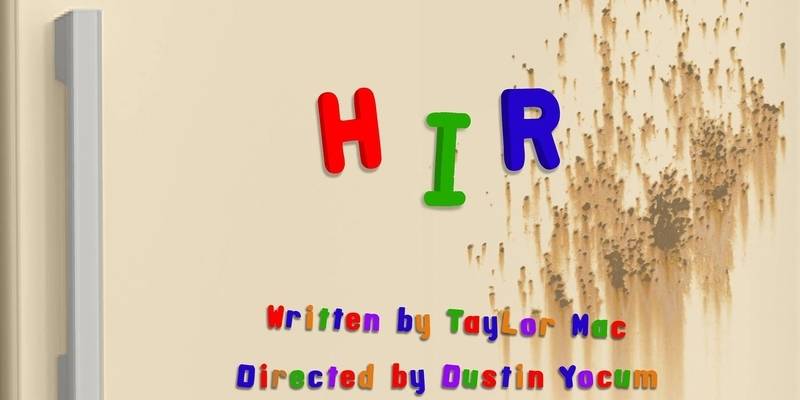 Wow, is there a lot to say about the newest play at the Station, Hir. I’ll just go ahead and cut to the chase by saying do yourself a favor and go see it because this review will not do it justice. Before we get into it, go check out Jarrod’s preview of it first.

As Isaac (Nick Strole) says in the first act of Hir, “Everyone has problems. Problems are normal.” And oh my how problems abound for the Connor family in this adaptation of Taylor Mac’s play directed by Dustin Yocum. Son Isaac has just returned from a stint in the Marines to a home he does not recognize. His abusive father, Arnie (Mike Prosise), has suffered from a stroke; his mother, Paige (Cara Maurizi), has abandoned all maintenance and upkeep of the home, not quite acting like her usual self; and his sister, Max (Jess Schlipf), is transitioning into his brother. Isaac had enough issues before he even set foot in his home: He was a drug addict dishonorably discharged from the Marines (where he worked in mortuary affairs, so, yeah. Yikes), and is needless to say suffering from PTSD. So to say he’s in a bit of shock from being thrust into this state of affairs he comes home to is a bit of an understatement. The audience is the fourth wall of the Connor family room, which is a reminder that besides what happens within our own home’s four walls, we don’t know what sort of issues that family next door has. And the Connors certainly have a lot of issues.

First and foremost this play is a comedy. A dark one, but a comedy nonetheless. It has moments that are just as laugh-out-loud funny as they are pitiful. Like when Paige is trying to explain Max’s transition to Isaac. She uses refrigerator letter magnets to literally spell out Max’s new preferred pronouns: ze (s/he) and hir (him/her), hence the title of the play. In an attempt to pronounce the acronym “LGBTTSQQIAA” she spits out gibberish syllables. It’s a funny moment, but it’s moments like these — lessons about gender identity — that are valuable and important but often buried under layers of academia and over-complicated jargon in reality. But Hir wants you to learn these lessons without confusing you like it does Isaac, because as Max says, “It’s not that hard.” The goal of this play isn’t to make someone an expert on the varieties of pronouns used by those who identify as non-binary, but it at least wants you to know about those varieties of pronouns used by those who identify as non-binary. For example, Hir’s playwright, Taylor Mac, uses the pronoun judy. And, honestly, it’s just as important to know that there is more than just he and she. Not only does Hir cover issues surrounding the terms used for genders, but also patriarchal repression, such as the fact that it’s 2018 and people still cower at the word “clitoris.” (Did you cringe when you read that word? Then go see Hir.)

Yocum’s adaptation of Hir is a wild ride of drama, humor, sadness, and every other emotion that it manages to squeeze into its runtime just shy of 2 hours. If you’re not persuaded to go see it just from the pure entertainment factor, then go see it to watch the stellar cast. The cast of four manage to fill their small, one-room set with a contagious energy and palpable desire to share this story. Schlipf, who plays Max, identifies as non-binary themselves and it’s evident that they desire to portray this character with as much authenticity and fervor as the role deserves. Prosise delivered a performance that was obviously well thought out. Portraying a stroke victim can verge into dangerous and mockery territory, but Prosise’s portrayal seemed genuine, and his timing was excellent. While it was a performance that was difficult to watch at times, it wasn’t because of being poorly executed.

Maurizi’s performance was as endearing and quirky as it was infuriating, but that’s because she played that endearing, quirky, and infuriating character of matriarch Paige so well. As many times as she made you laugh, she made you want to throttle her, which is a testament to succeeding in portraying such complexity of that character. And then there is Strole, whose dramatic rendition of Isaac was at times boisterous, but there’s nothing less to be expected than when a character is going through such drastic changes. Strole managed to come just shy of going over the top in order to deliver a somber and emotional conclusion to his performance. And kudos to him, as I’m sure after every performance he’s exhausted.

This is the part of the review where I intended to take my scribbles from a notepad and fragmented sentences from the notes I took in my phone to make educated analyses about parts of this play and its characters. But, you know what? No matter what I write here, I won’t feel like I capture the essence of the play and the cast’s performances. What matters is that you go see it for yourself. It’s well worth it.

Get those tickets here.