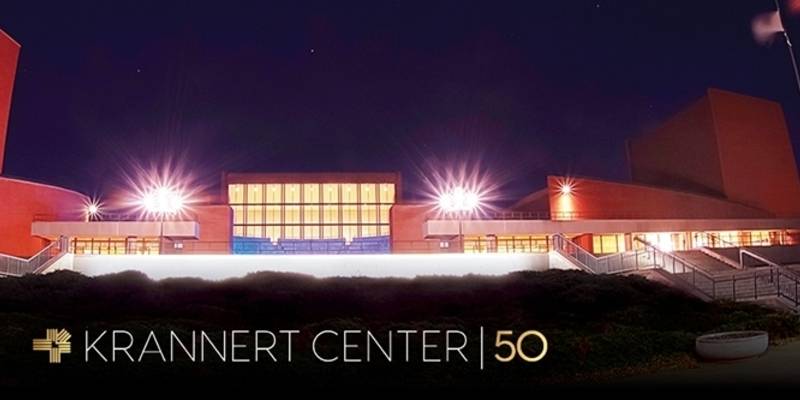 Any telling of Krannert Center for the Performing Arts’ history essentially starts with a love story.  At the core of its origin story is the love that Herman and Ellnora Krannert shared for each other, for the performing (and visual) arts, along with their passion for this University and its surrounding community. As we approach Krannert Center’s 50th Anniversary Celebration this weekend, it’s important to consider how deeply this spirit has impacted our Campus and our lives.  And dive deep we will.  Event highlights, resources, and other logistics will follow at the end.

KCPA is a manifestation of love. It exemplifies the magic that happens when love for the arts fully embraces love for higher learning and community engagement. If you’ve been following KCPA on Facebook or Instagram you’ve seen the posts about its acoustic and architectural wonders. But as we all know—Krannert is more than just a performing arts center. You can feel it as soon as you walk in. We all have different names for it. But it is real and it is carefully cultivated by every single member of the KCPA family.

Recently I was lucky enough to sit down with Mike Ross, Krannert’s current and sixth director. He talked about his role as steward of Krannert’s mission and legacy—a role he approaches with creativity, humility, and devotion—and walked me through his programming philosophy.  But mostly he shared his ideas about what has and continues to make Krannert such a powerful presence in the lives of students, faculty, performers and audiences.  Below are some of my favorite moments from our interview.

By virtue of Krannert’s guiding principles and the University’s land grant mission, Krannert is inherently “egalitarian,” “neither high-brow or low brow, but rather ‘no-brow’.” You see this in the accessible ticket pricing and in the non-dress code dress code. This egalitarian philosophy also translates into equal time and space for dance/theatre/music and for big performers, emerging artists, and student performers.  Krannert is both a public performance space and an educational center, or laboratory for the arts. Its mission and the range of audiences it serves is impressive, if not daunting.

And the mission doesn’t stop here. A commitment to community service and social justice. Ross and I both agreed that the Mark Morris Dance Group’s annual weeklong residence exemplied this commitment well.  Each year MMDG brings dance and movement to those who often have the least access to and the greatest need for the healing and transformative power of art. MMDG dancers visit the kids at the Cunningham Children’s Center and have also established KCPA’s Dance for Parkinson’s program.

Ross invites audiences to “come as you are and hopefully leave transformed.” Living right in the center of Ross’ office blackboard I discovered the key to Krannert’s inner workings.

“We are here to deepen the value of being.”

This is the “litmus test” that guides all decisions, big and small.  Ross went on to share his belief that “art isn’t the point, art is the vehicle. The point is to pursue one’s life with renewed hope and purpose.”

A particularly poignant example of KCPA’s capacity for healing and transformation took place the day after 9/11. The scheduled artist honored his commitment to appear and together with the audience created a space for sharing pain and finding a respite in a time of unimaginable suffering. Krannert is an oasis. A place to restore the soul and find hope.

I shared a recent epiphany I’d had while attending Mark Morris Dance Group’s Pepperland in Krannert’s Tryon Theatre. As I took my seat and looked around, I realized that this was the space where I had dancedthe  Bon Odori with other community dancers during Japan House’s 20th anniversary celebration. I took a breath and thought to myself, “Wow. I danced on the same stage as the Mark Morris Dance Group.”  Ross smiled and said “that’s exactly right, that’s a microcosm of the mission too.”

Ross and the entire KCPA family recognize that Krannert’s impact is broad, diverse and for many of us, deeply personal. And because of this, they have invited all of us to co-create a collection of stories about what this place has meant to us. True to their mssion of egalitarian programming and access to the arts, they fully embrace the notion that Krannert, like the arts themselves, should belong to all of us. In its 50 years, KCPA has seen engagements, wedding ceremonies and community yoga classes on the stage of the Great Hall. So what’s your Krannert story? I know you have one. So go online and share it now.

Somedays I’m lucky enough to call KCPA my second office. Somedays its my retreat—a place where I can reset and reconnect with my personal passion for the arts. This weekend it will be a place to look back with gratitude and look forward with hope.

A golden anniversary milestone symbolizes a lifelong commitment — in this case, one to the arts, higher education, and supporting the best in ourselves and each other.  So wherever you are tomorrow around 6 p.m., let’s raise a glass to Krannert Center for the Performing Arts.

You can check out Smile Politely’s full listing of this weekend’s events here. Personally, I’m looking forward to the Open House, the lectures, and the Gala (which will feature video and live messages from a diverse group of KCPA leaders, alumni, and friends). You can also get a sneak peek at some of KCPA’s archival photos here.

This celebration is happening live in Urbana and all across social media.  So be sure to share your best memories and best wishes.

And mark your calendars for next year.  Thanks to the mayors of both Champaign and Urbana, April 12th to 14th has been officially proclaimed Krannert Center Anniversary Weekend.  Read full the proclaimation here.

All photos from Krannert Center for the Performing Arts except the one directly above, which is from photographer Anna Longworth.