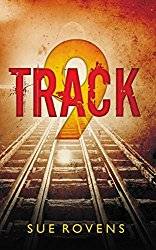 In late June, a train speeds into a station in Germany, wreaking havoc and creating cannibals in its wake. No spoilers, this all is spelled out within the first four pages. Nearly six months later, a Midwestern couple finds themselves accidentally stranded overnight in the half-repaired, then abandoned, station. Over the course of that evening (and just over 200 pages) events unfold both in Germany and back home in central Illinois that prompt the reader to consider more possibilities than what we may naturally perceive. Sue Rovens’ Track 9 doesn’t shy away from the unexplainable to build a slow-burning atmosphere of frightful unease, and may leave you questioning more than just what you saw from the corner of your eye.

Hopefully, the casual mention of cannibalism was enough to tip you that this book was going to explore some nightmare scenarios. The thing is, unlike many fantasy or horror books, there is no difference in the world which makes these nightmares reasonable. This is our world, one before any viral apocalypse or radiation-prompted (d)evolution. There’s a regular couple back at home in Bloomington-Normal buying candles at the mall and eating out on Veteran’s Parkway. You’ll recognize this world, and more than likely the town, but most of all, the people.

Gary and Grace Wolf are the couple stranded in Germany, and Sarah and Mike Waverly are out on a Sunday afternoon, thinking about having to be awake to pick up the other couple at eleven o’clock at night. The entire cast is in their forties, although sometimes their Midwestern sensibilities make them appear much older. If you are reading SP and were born at any point in the 1970s, chances are you might not be ready to prefer the dirty martinis at Olive Garden to the ones at a more hip, local joint… but you may know someone your age who does. And really, in BloNo, there’s not a ton of hip, local joints.

It’s that foundation of the down-home personality that makes it all the more unsettling when Mike’s general sense of distress that he hasn’t heard from his college buddy results in some deeply disturbing hallucinations. These are so naturally blended with the narrative and viscerally described that I found myself jarringly shocked upon reading the first one. After that, I actively worked to rein in my emotions until I had read all the way through an experience to see whether it was real or imagined before I allowed myself to react.

That proved to be impossible while I was reading about the Wolfs who were in Germany. The plot moved through a morass of possible and impossible events doled out in thankfully short chunks interrupted by the more-familiar, less-confusing Waverlys in BloNo. While reading, my mind raced through possible explanations: poltergeists, possession, psychic “impressions” left by a traumatic event, actual zombies, or just plain old PTSD. Even after the conclusion, I’m still unsure which, if any, of these may have been the cause.

At first read, I was frustrated with what seemed to be many unanswered questions regarding the plot. After pondering these, however, for the past several weeks, I discovered that every question I had pointed to a larger issue within the themes of the book. Every good horror novel uses the things we fear to make us face, allegorically, the things that are plaguing us on both a personal and societal level. Rovens proves adept at understanding and representing people and the everyday horrors we face.

Gary and Mike are both victims of toxic masculinity who lack the awareness to see how they poison themselves and their relationships. While Gary is the more obvious asshole, both of them suffer for their misdeeds, although Rovens made it quite clear that they were merely indoctrinated instead of malicious. While Grace has to move from a place of victimhood to one of power at lightning-speed, her eventual fate demonstrates how society is quick to destroy a woman who dares to stop accepting the bare minimum. Technological advances play a huge part in miscommunication due to glitches in software, as well as examining the way we place a lot of currency on our expectation to be able to reach everyone at all times, and the resulting disasters if we can’t. Both of these problems can seem to feed each other, especially in an intimate –friendship or romantic—personal relationship, and the characters in Track 9 find themselves at the mercy of this complicated symbiotic entanglement.

Track 9 by Sue Rovens resists the usual trappings of a mainstream horror novel: there are very few “gotcha!” moments and most of the supernatural happenings are implied, but it is visceral, dark, and disturbing. It aims to turn readers’ gaze inwards, set our physical systems on high alert, and give us that sense of foreboding and dread that results in a full-body shudder. It successfully pokes at some well-hidden fears and deeply-buried distrust of each other and technology (and a little bit of the government for good measure). If you want a quick read that will leave you thinking for weeks, I recommend you support an independent writer who is making use of amazon.com’s CreateSpace and order a paperback or kindle copy.

[Editor’s note: While Smile Politely specializes in local artists, and Rovens has made a home west on 74 in BloNo for several decades, she does have ties to our C-U community through the music scene and other avenues, like me. In the spirit of encouraging the independent artist, and no small amount of badgering, I was allowed to publish this review, probably as a “last wish“.]