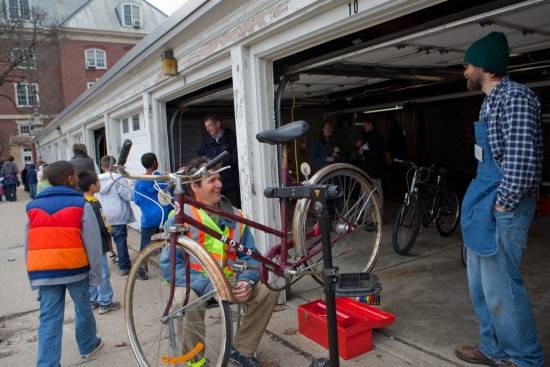 When and if the oil runs out and runs postmodern car culture aground, Champaign-Urbana’s pretty well positioned to deal… at least insofar as it will still be pretty easy to move around town, scavenging for food and whatever else one does after cars are gone (besides, like, live in a totally unalienated utopian World Made By Hand). It’s completely flat here and with the roads free of cars there’ll be no excuse, really, for not always just cycling from point A (say, your non-alienated libidinal workplace) to point B (e.g. the collective farm where you’ve gotta pick up your broccoli ration).

Even in our preapocalyptic days, C-U’s already a very bikeable community. We’re blessed with numerous bike shops around town like Durst Cycle and Baker’s Bikes: places you can pick up great, affordable new and used bicycles, respectively. We’re also lucky to have great advocacy groups like Champaign County Bikes, numerous bike lanes on-campus and off, and a tremendous civic culture that encourages things like the upcoming Bike to Work Day and comprehensive transportation plans including space for bicycles.

We’re also blessed with a really great bike co-operative: The Bike Project of Champaign-Urbana, a not-for-profit community bike shop based in the Urbana-Champaign Indymedia Center near Lincoln Square in Urbana. Sure, The Bike Project sells some bikes… but the real attraction of the co-op is that when one becomes a member, one gets access during open hours to the shop, its tools, and the collective bike repair knowledge of the co-op’s volunteers.

These volunteers won’t fix your bike for you; instead they’ll help you learn how to fix it yourself, from problems as simple and commonplace as flat tires and worn-out brake cables to undertakings as involved as revamping a bottom bracket, repacking a hub, or replacing a broken cotter-pin that won’t come out unless it’s first heated up with a torch (just for example). The point is to empower you to be able to repair, to maintain, and even to build your own bike — useful skills all, both before and after the hypothetical onset of a post-carbon world.

And don’t worry about all that oil crash stuff: we’re sure to have enough miscanthus to keep on keepin’ on. Cycling, though, helps you keep in shape and I promise it will make you happier than driving.