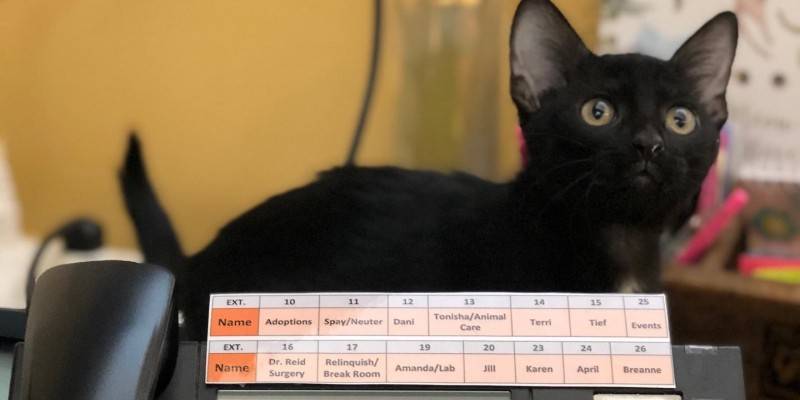 If you’re anything like me, over quarantine, you might have been tempted to adopt an animal. Maybe you saw a cute Facebook post of adopting a pet from a local shelter. But many might not know just how many programs and initiatives besides adoptions exist at the Champaign County Humane Society. All of the programs exist with an ultimate goal of making sure that animals are in good homes and don’t need to end up in the shelter in the first place. I spoke with Mary Tiefenbrunn, Executive Director of the Champaign County Humane Society, over the phone about some of the things that the Humane Society does to make sure animals are placed in a good home and stay there. (Spoiler alert: there’s a lot!)

Smile Politely: Where does your passion for animals come from, and how did you end up as Executive Director at the Humane Society?

Mary Tiefenbrunn: Most people are surprised that I didn’t grow up with dogs or cats as a kid. I did, however, become a committed horseback rider throughout my teens, in my home state of Connecticut. When I went to college, I got completely away from the whole horse thing, and became a theatre major with a focus on stage management. Many of the theatres that I worked for were nonprofit organizations, so that’s where I first got interested and involved in nonprofits. About nine years after undergrad, I decided to change careers and attended Loyola University Chicago School of Law. But being a horse girl, I always kind of longed to live in the country. I started looking for clerkships that would be in areas further out of the city. By then, I had acquired two shelter dogs and a cat from a co-worker. After I moved to Urbana in about 2000, I became more deeply involved in animal welfare. I volunteered with a birddog rescue group and got involved with forming a small nonprofit here called the Care Center, a local nonprofit with a focus on humane education and providing financial support for low-income pet owners. I started on the Board of Directors for the Champaign County Humane Society in 2005. In 2007, the Executive Director position became open and I started in my current position. I love that I can use my law degree, my love of animals, my management experience, and my non-profit experience; in this job, it all comes together.

SP: Besides adopting animals, what other services does the Humane Society offer?

Tiefenbrunn: That’s a great question, because so many times people just refer to us as “the shelter”. It kind of bothers me because we’re not just a shelter. The underlying mission or concept behind the other services we provide is that running an animal shelter is basically a “band aid” to a problem. Pets become homeless for a reason, and we’re here to take them in and rehome them, which is great as a safety net that’s definitely needed, but the other goal that we have been focusing on is reducing the need for our “band aid” by helping to prevent animals from becoming homeless in the first place. One example of how we do this is by offering affordable dog training classes. Dogs that get trained are more likely to stay in the home; a good relationship between the owner and the dog is key to the success of that relationship, and getting training and education, and developing that bond with the animal, is really a big part of that. Another program that prevents pet-homelessness is our low-cost spay and neuter clinic, which runs on an ongoing basis for anybody who qualifies.

Since 2005, we’ve also had a humane educator on our staff. That person also serves as our lead humane investigator. Whenever we get a call from someone saying, “my neighbors are not taking care of their animal. I see it outside and cold” or “I see that they have no food or water,” we can do an investigation. Humane investigators are authorized by the Illinois Department of Agriculture to investigate concerns about possible neglect or cruelty. In many cases, investigations become an educational opportunity rather than an enforcement matter. A lot of the time we respond, we end up talking to the pet owner, and we find out that they really care about their pets but they need help or resources. Maybe they can’t afford veterinary care, or maybe they lack education and aren’t aware of the needs of their pets. We can help them and show them how they can provide their animals with a better life.

Our humane educator program ties in with our free pet food program, because we get a lot of food donated that we don’t use here at the shelter. We have clients that have lost their job or are waiting for a disability check, so they can come and pick up some food. That can sometimes lead to long-term relationships where we can make things better for those animals. But it’s also true that sometimes the best thing we can do is convince somebody that they’re unable to meet their pets’ physical and psychological needs and that if they relinquished them to us we could find those animals a really good home and the life they deserve.

We also had a lot of ongoing education programs before COVID. Our educator has an array of lesson plans and presentations that she can do, including things like how to safely interact with dogs.  For several years, that presentation was part of the mandatory curriculum for first graders in Unit 4. We also had a summer camp program called “animal adventure camp” through the Urbana Park District, and a course on pets in Parkland’s College for Kids. We look forward to resuming these programs when things get back to “normal.”

SP: You mentioned some programs had been cut or cancelled due to COVID. What has the stay-at-home order been like for the Humane Society?

Tiefenbrunn: One of the biggest changes is that we suspended our entire volunteer program. We have a staff of about 23 people, but we normally also have many volunteers coming in every day to help with the morning animal care and cleaning. A few weeks ago, we started welcoming back a handful of our really good dog walkers who really wanted to come. But we are still keeping the numbers low so that we don’t have too many bodies in the shelter at the same time.

The other big change was going to adoption by appointment. We no longer have open hours where the public can just come in and look at the animals and pick out a pet they want to meet with. Instead, they have to make an appointment to come and meet an animal. We are asking people interested in adoption to do their browsing on our website so that when they get here they already have chosen a couple of animals they want to see.

SP: Over the past few months, have you seen an increase in intake of pets or in pet adoptions at all?

Tiefenbrunn: It definitely impacted the animal population here. It was interesting the first few months: in March, April, May and June, animal intakes (the number of animals coming into the shelter) were substantially lower than usual for the time of year. Intakes started picking back up in June, gradually working up to a somewhat normal summer animal population at the shelter. Then in July, things really picked up. But during the late winter and early spring there were times when we had only a couple of dogs up for adoption and we were low on cats too. The pandemic has definitely been a weird time.

SP: Are there any animals for adoption right now?

Tiefenbrunn: Yes, we always have animals up for adoption! We have many cats and kittens available now and more kittens will become available as they get old enough for adoption.  We also have a variety of small animals available. We don’t have many dogs right now, but we do have some. (Note: the Meowt of this World Promotion is taking place at the Humane Society until August 25th!)

SP: Finally, are you a cat person or dog person?

Tiefenbrunn: I actually have no pets right now! I would’ve called myself a dog person until recently, but last year I said good-bye to my tortie-cat at the age of 23. I feel like it dishonors her memory to call myself a “dog person” after spending 19 years together. I really love both species; they are both fascinating animals and great companions.

You can adopt a cat at a discounted adoption fee through the Meowt of this World Promotion until August 25. To view available cats for adoption, visit cuhumane.org.