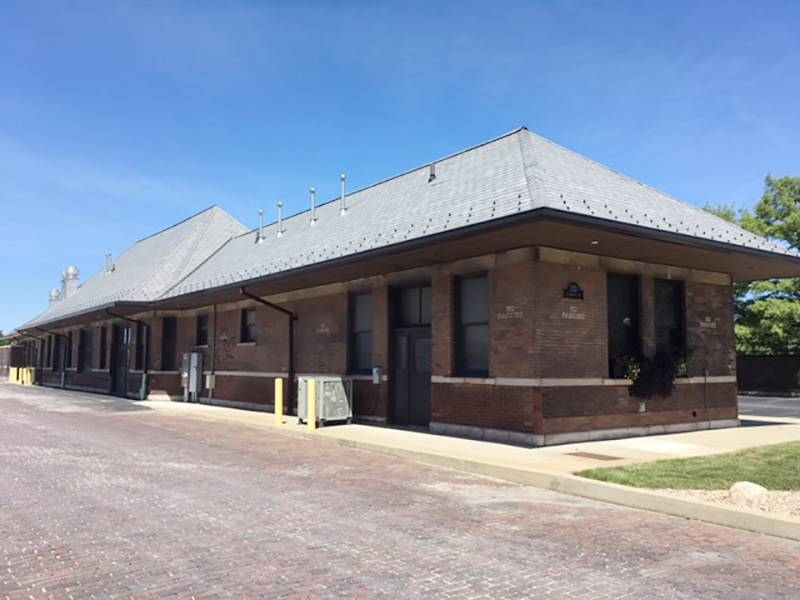 For this episode of “Historic Sites Re-visited” I have put together a nice walking tour through Downtown Champaign. In case you have missed our previous five articles, let me start this piece with a brief review of the project that started it all.

To commemorate America’s Bicentennial in 1976, the Champaign County Bicentennial Committee published a 50-page booklet titled Historic Sites in Champaign County. The book identified 78 specific locations throughout the county (44 in Urbana and Champaign; 34 elsewhere). It included a picture and brief description for each site along with maps marking their location with numbers corresponding to an official marker at each site.

Very few of those original signs remain at locations today. The little booklets, however, can be obtained at the Champaign County History Museum, located in this week’s starting point (Historic Site #59), the Cattle Bank at 102 E. University Avenue. The Museum has been closed during Covid-19 restrictions, but hopefully it will soon be reopened to the public.

The Cattle Bank is the oldest commercial building in Champaign, completed in 1857 to house a branch of the Grand Prairie Bank of Urbana. After the bank closed in 1861 the building housed a number of business, including a mineral water manufacturer and several different drug/grocery store operations. A fire in 1971 gutted the building, and for many years it sat vacant.

A community campaign to save the building organized by PACA led to its listing on the National Register of Historic Places in 1973 and its successful restoration in the 1980s. The Champaign County History Museum has occupied the Cattle Bank and adjacent Oakley Building (built 1869) since 2002. A nice overview of the building’s history and its transformations through time can be found in the Museum lobby.

Head west across First Street and walk around the north side of the Champaign Police Station. Take a moment to visit the “Looking for Lincoln” marker (“Champaign’s Lincoln”) beside the parking lot. There is an image of the Doane House (Historic Site #58), “West Urbana’s” original depot and hotel, on the lower portion of the marker.  As you approach the railroad underpass, the Doane House would have been on the east side of the tracks, just to your left.

This area has changed significantly since the Doane House burned down in 1898. The railroad tracks were originally at grade and Main Street crossed the tracks. Two streets, Oak and Water, paralleled the railroad on the east between the tracks and First Street. Multiple buildings were scattered along those streets, where the police station now stands.

Continue west through the underpass. On the west side of the tracks, up and down Chestnut Street, you will see remnants of the Illinois Central Railroad Complex (Site #61). Champaign began its life here as the “Railroad Addition to Urbana” when the plan to route the ICRR two miles west of Urbana became official. When the railroad arrived in 1854, frame residences and commercial buildings soon rose up around the tracks and beyond.

Within two years the community was home to dry goods, hardware, and grocery stores, as well as a stove and tin shop, a bank, and at least two churches. The railroad works complex consisted of a roundhouse, machine shop, repair shop, freight house, water tower, and miscellaneous other outbuildings (Natalia Belting, The Beginnings: Champaign in the 1850s and 1860s). The old freight depot, water tower supports, and various small outbuildings remain to be seen.

A new brick depot replaced the Doane House hotel after it burned down. Originally it was situated at the east end of Main Street along the tracks (you would have walked through its north end after passing under the tracks). It was moved to its present location north of Main Street in 1923 to make way for the new grand “Beaux Arts” passenger station. Both buildings continue to grace downtown, the original depot now home to Black Dog Smoke and Ale House; the 1924 building is now home to various shops, restaurants, and offices.

When a new roundhouse and railroad complex was built north of town in 1911, the old downtown roundhouse was razed. Great historic photos of the downtown area and its transformations over the years can be found at TJ Blakeman’s wonderful “Champaign History” blog (along with many other wonderful pictorial histories of downtown).

On the north side of Main, a bit farther west, was Site #62, Vriner’s Confectionery. Built in 1898 by Greek immigrant Peter George Vriner, this building was originally a cigar story and confectionary shop, an interesting combination! For nearly a century, family-operated Vriner’s was a nationally known “monument to Greek-American culture,” famous for its English toffee (said to have influenced the Heath Bar formula), fountain sodas (Eleanor Roosevelt reportedly proclaimed hers the “best she’d ever had”), and candy canes (enjoyed by John Kennedy during a campaign visit). Al Capone, who was said to down two to three chocolate sundaes every visit, is noted as another legendary guest.

The building was listed on the National Register of Historic Places in 1983. The family business closed in 1997. From 2005 until recently, the building housed popular nightspot Memphis on Main, though the fading red and white Vriner’s sign painted on the brick façade remained visible above the club’s canopy.

As you continue west on Main Street, you’ll pass by the iconic Jos. Kuhn & Co. department store building, constructed in 1907 on the site the store had occupied since the 19th Century. The former Skins ‘N Tins building at the northeast corner of Walnut and Main is, according to city history chronicler TJ Blakeman, “one of the oldest buildings in downtown and dates back to the origin of the City of Champaign itself.”

Oddly, the only other commercial building in downtown proper to receive the official “Historic Site” designation in 1976 was the Metropolitan building (Site #64), formerly at the southwest corner of Neil and Church streets. It was sadly destroyed in a 2008 fire; the Hyatt Place now sits at that site. To get to our next stop, go south on Neil one block to Park Street, then go west on Park, cross Randolph Street, and you’ll see the majestic Virginia Theater (Site #69) on your left.

One of the most recognizable landmarks in downtown, the Virginia Theater opened December 28, 1921. The building was designed by distinguished theater architects C. Howard Crane and Kenneth Franzheim “to reflect a combination of Spanish and Italian Renaissance styles.” Distinctive features include its “decorative terra cotta exterior with multi-colored lunettes and rondells,” elaborate gilded interior designs, and an original Wurlitzer pipe organ (Historic Sites).

According to the theater’s website, the Virginia was owned and operated by a variety of movie companies over the years, including RKO and Keresotas. The final film of the theater’s original run was shown in early 1992, and the Virginia passed through a decade of changing ownership and uses until it was purchased by the City of Champaign and transferred to the Champaign Park District in 2000. A complete interior renovation and restoration followed, and in 2011 a new square marquee reflecting the original design replaced the triangular neon-lit marquee that had been installed during the RKO years.

Since 1999 the Virginia has hosted the annual Roger Ebert Film Festival, bringing national attention and major film celebrities to the city each. Pictures from over the years can be viewed at the exploreCU website.

To reach our final stop on the tour, continue west on Park, go back north to Church Street, then west to 306 W. Church, now the law offices of Meyer Capel. This striking building was originally the Burnham Athenaeum (Site #70). In 1895 Champaign banker and philanthropist Albert C. Burnham donated this site and $50,000 for the construction and maintenance of a public library in the city. Architect Julius A. Schweinfurth was “known for buildings he designed for Wellesley College, for the Hemenway Gymnasium in Boston, and for a score of schools and churches in that region” (Historic Sites).

The Neo-Classical design, with its ionic columned façade, evokes architectural styles from the 1893 World’s Columbian Exposition in Chicago. The building was home to the Champaign Public Library for over 80 years until the library moved to its current location in 1978. Meyer Capel purchased the building the following year. Just after renovations began, a 1979 arson fire damaged the Athenaeum’s roof and interior. Fortunately, most of the interior decoration (paneled wood ceilings, columns, wooden molding, fireplaces and mantels) remained intact. After a complete renovation and restoration, Meyer Capel moved into the building in 1980.

The starting point for our next episode of “Historic Sites Re-visited” is right across the street: West Side Park. We will explore history of the park itself and visit some of the city’s grandest residences that are situated nearby.