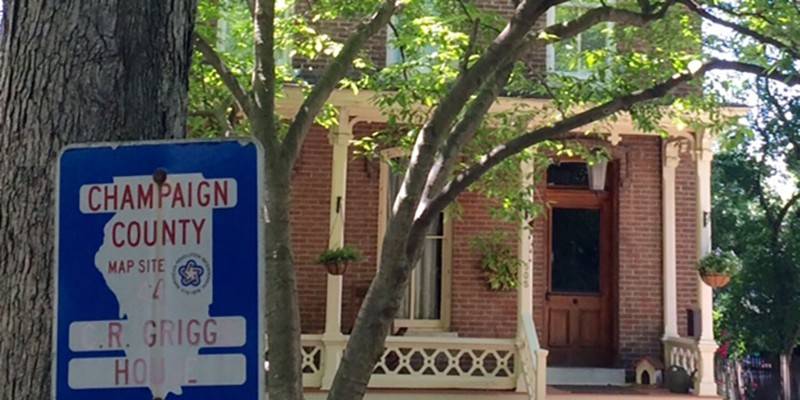 West Main Street from downtown to Lincoln Avenue is of the most enchanting and historic few blocks’ drive in Urbana. This narrow street, nearly canopied by the surrounding trees in full leaf, is an experience to savor on a summer day. A host of lovingly-restored Victorian and Queen Anne residences that line the way draw you back in time.

In this episode of “Historic Sites Re-visited,” we begin with a cluster of homes in the 500 block of West Main that received the official 1976 designation. If you missed the original article describing the “Historic Sites” project, you can read it here. This time, we’ll set off from Urbana’s birthplace along the Boneyard Creek (see our last episode for that story) and head west.

According to the City of Urbana website, “Louis Wahl was a local saloon owner, while brothers-in-law Emmett Yearsley and Frank Marriott were farmers and real estate speculators.” Wahl purchased these lots from original owner Samuel T. Busey and built his striking Queen Anne home there in 1890.

Emmett and Alma Yearsley built their home in 1893. The Historic Sites description reads, “The basic form of this house evolves from the Victorian Italianate style [with] details and finishes from the Queen Anne style.” This house, like the other two, originally had a Queen Anne tower that was removed sometime prior to 1976.

The Marriott House was also constructed in 1893 in the Queen Anne style. It’s distinctive features include a “large, cubic asymmetrically placed tower [and] wide veranda” (Historic Sites). All three homes have been beautifully restored and maintained, with intact exterior and interior features exemplary of the time of their construction. When these three fine residences were completed, the Champaign County Herald proudly declared, “On West Main Street are three homes that would do honor to Chicago or any other city.”

Across the street at 505 W. Main is Historic Site #44, the Clark R. Griggs House. Built two decades before the others, it is quite different than the elaborate ladies it faces. Historic Sites offers this description: “The Italianate style which the Griggs house exemplifies is introspective and solid. The detailing lends to a lively note: elaborate brackets set in pairs under the eaves, a ‘gingerbread’ front porch, and a bay window.” I imagine the Griggs House watching the Queens being constructed across the street with a mixture of disapproval and curiosity.

An “Illinois Ancestors” biography has Clark Griggs arriving in Champaign County in 1859 from Massachusetts, where he served in the state legislature. A farmer, land speculator, and railroad developer, Griggs served in the Civil War and afterward as mayor of Urbana. He was elected to the Illinois House of Representatives in 1866 and was instrumental in securing the location of the new “state industrial university” (soon to become the University of Illinois) for Champaign County.

Griggs also pushed for the creation of what became the Indianapolis, Bloomington, and Western Railroad, in which he was also an investor. This home was constructed in 1871 as a wedding present for Griggs’ son, Albert. He himself returned to the east that same year to pursue more opportunities in railroad development. In one of the few instances, the original 1976 Historic Marker sign remains intact at the site.

Back downtown, where Main and Springfield diverge, once stood one of Urbana’s most iconic structures, the Flatiron Building. Built in 1906, it housed a department store (basement, first, second floors), the offices of the building’s architect, Joseph Royer (third floor), and several other offices. The Elks club occupied the fourth floor. The Flat Iron Building was destroyed by fire in 1948.

Not far from the Flatiron down South Race Street, the Lincoln statue created by famous Illinois sculptor Lorado Taft once stood. This iconic piece was commissioned with a $10,000 bequest to the city of Urbana from Mary Cunningham, the wife of Judge J. O. Cunningham. Historic Sites relates that Taft “gave careful thought to the theme he would follow: he decided to portray Lincoln as the young lawyer that Urbana had known, ‘an earnest good humored orator, stating his case.’”

Dedicated on July 3, 1927, the Lincoln Statue was located “on the site of the old Kerr Tavern, a favorite stopping place for Lincoln when he was riding the circuit” (just in front of the recently opened Urbana-Lincoln Hotel, Journal of the Illinois Historical Society Vol. 20, No. 2, July 1927). The statue was later moved to Carle Park, where it was designated as Historic Site #47. Lincoln still stands tall and proud on the west side of Race Street, opposite Urbana High School, at entrance to Carle Park.

Lorado Taft was, of course, also the sculptor of the famous Alma Mater on the University of Illinois campus. His childhood home was originally located nearby at 601 E. John St. These two locations, along with several others on campus, will be featured in the next episode of “Historic Sites Re-visited.”