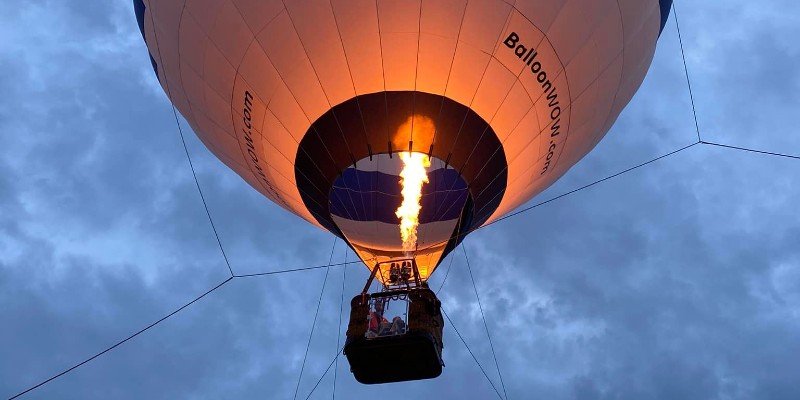 September is a month filled with festivals, and this year there will be a new one on the calendar. The first Champaign County Balloon Festival will “launch” this Friday and Saturday, September 24th and 25th, at Dodds Park in Champaign. Balloons over Vermilion has been a popular event over the past several years, and Centralia has an annual festival, but this will be the first for C-U.

John McDaniel and Chris Diana, of Twin City Realty, are two of the people leading the charge on the event. While this is something that will appeal to all ages, Diana emphasizes the focus on providing an exciting experience for kids with disabilities. They are working with Midwest Balloon Rides, a company from Indiana that provides wheelchair accessible tethered balloon rides. The basket is larger, and has a plexiglass door so that someone in a wheelchair can see out. There is also an apparatus in the basket that will securely hold a chair in place. Organizers are working with OSF Healthcare to schedule kids for tethered rides, which will take place both afternoons of the festivals. Then, rides will be open to anyone who wants a little taste of what a ride in a hot air balloon might be like, but a little closer to the ground. As Diana says, “These aren’t taking off into space….it won’t make you sure that you’re okay for a [full] balloon ride, but it could make sure that you’re not!”

The tethered rides are only one part of the two day festival. Professional aeronauts (that’s the name for a hot air balloon pilot, thank you Google) will be on hand to do a balloon launch on both days of the festival. Hot air balloon pilots are fully licensed and FAA approved, and they are a bit of a club of sorts. They often travel together and appear at the same events. There will be pilots coming to the festival from at least six other states, including Pennsylvania, Ohio, Indiana, and Missouri. Many of the pilots are stopping at the Champaign festival en route to the Albuquerque International Balloon Fiesta next week.

There will be about 15 balloons taking flight each day, though it will be dependent on weather. “Balloons are kind of fickle. They need very nice weather. They cannot tolerate much wind,” says Diana. Hot air balloons typically launch in the very early morning, or in the early evening. That is when winds are more favorable. Diana says that even a 15 mph wind, which isn’t very dramatic, can keep a balloon grounded. Balloon launches are carefully monitored by the FAA, there will be a representative on hand to conduct flight control. Fun fact: Balloons are the highest priority aircraft. They cannot be steered, so they take precedence over planes.

The balloon flights are planned for 5 p.m. each day, and they will be playing a game where one balloon drops a marker, and the others see how close they can drop their markers. Once it’s dark enough, the balloons will do a “glow”. Says Diana, “Balloons are tethered to the ground, but they light the burners so they light up like big light bulbs.” This will also be an opportunity to get closer to the balloons.

The balloon activities are the main draw, but there will be a full carnival at the event, with rides, a kids tent, and fair food. Joyful Bubbles will be on hand, and there will be face painting, kids games, balloon animals, and a magic show.

A few logistical considerations: The main entrance for the festival will be the Mattis Avenue entrance. General admission is $10 for adults, and 12 and under are free. Beyond that, be prepared to spend money on carnival ride tickets and food. Much of the festival will be located near the softball complex. Gates open at 4 p.m. on Friday, and 10 a.m. on Saturday. The festival will remain open until 10 p.m. You can find the full schedule of events here.