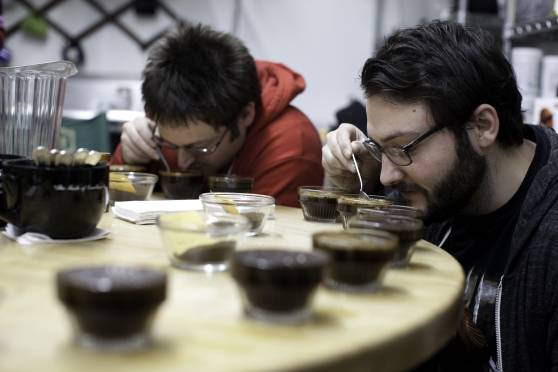 When I was a youngster growing up in the hot, dry, massive suburban metropolis that is San Diego, coffee didn’t mean a whole lot to me. Neither did local stuff, except maybe the Pacific Ocean and carne asada tacos. But then I left it all behind for college in Seattle, while my parents relocated to Portland. All of a sudden, I found myself wandering on foot through rainy, grey neighborhood streets and ducking into independent neighborhood coffee shops, where I would stare in bewilderment at the handwritten menu and then shyly order a nonfat white chocolate mocha from the smirking hipster barista. It wasn’t long, though, before I got into the real stuff: locally roasted, freshly brewed coffee, or freshly (hand) pulled shots of espresso, straight up. There are a few cafes in Seattle that do it so well you won’t notice your drink isn’t festooned with syrups and whipped cream. I brought this fiendish love of high quality coffee with me all the way to Champaign-Urbana last year, where I feared being a coffee insider of sorts would make me a cultural outsider. After a few shameful months of ordering beans online, however, I began asking around. Turns out Champaign-Urbana is full of surprises, one of those being Columbia Street Roastery.

On my first visit to the roastery, I noticed two things. First, all of the heavy-duty equipment is right there, visible to customers through a giant window that overlooks the roasting room. Very industrial, very accessible, very hip. Second, the room where you actually purchase the beans is refreshingly free of pretentious or intimidating vibes. It’s a strange balance of awesomeness and comfort. I will admit that some of the coffee blends made me cringe — “Out of Africa”? “Seattle blend”? “We think ours is better than Seattle,” the charming saleslady winked. I went with a pound of single-origin whole beans from Guatemala, which I brewed at home and found to be great. The thing is, with blends like those mentioned above, Columbia Street isn’t trying to out-Seattle Seattle; instead, they are making great coffee and getting it to customers in a manner that is purely Midwestern, which is to say relaxed and welcoming. Artisan roasters put in the effort and care required to ensure that what you’re pouring into your mug every morning is, simply put, delicious. But when done right, local artisan roasted coffee can also give you a sense of place – not only the place where the coffee beans grew, but also the neighborhood in which you live and buy and drink it. Columbia Street Roastery is doing it right.

Want brewing tips? For everyday deliciousness, I like to use a French press or porcelain pour-over, and grind my beans at home just before brewing. I’ve got some other brewing tricks up my sleeve that I’d be willing to trade for some of yours.

Some weeks ago, Mark and John Herriott, the owners of Columbia Street Roastery (CSR) invited the esteemed editors of Smile Politely to a “cupping” (which I feel a whole lot more comfortable calling a “coffee tasting,” and thus will for the duration of this article). A handful of us jumped on the chance to experience this, and even knowing that we’d have to put in precious, precious minutes to write about it, most of us still showed up for the tasting.

It was worth every precious minute.

Mark and John not only provided free tastings of several selections of their roasts, but they also gave us a full tour of their facility. These men have traveled the world, and they are human encyclopedias when it comes to this topic.

We learned that Brazil, surprisingly enough (to me, at least), is the largest producer of coffee in the world. John told us that Brazil used to be considered the “Folgers of coffee producers,” but it now offers higher quality roasts. We learned that coffee beans are actually seeds, and that while they’re still on the plant, they’re called “cherries.” And we learned about the actual structure of both coffee berries and beans. Coffee beans are as diverse and sensitive to temperature and weather as grapes are. And listening to a knowledgeable roaster discuss coffee is like listening to a wine aficionado talk about different varieties of grapes.

And finally, we watched as they roasted a new batch of deliciousness.

Peter Asher Coffee and Tea in Champaign, Illinois from Justine B. on Vimeo

I have a confession that I did not disclose during the tasting. Until that day, I’d only enjoyed coffee with cream and sugar. I prefer half and half, but lately I’ve been using So Delicious coconut milk. I like strong coffee (my favorite roast is Italian espresso), but I don’t like it unless it tastes like a dessert. So, when we sat down for the tasting, and I saw that we would be drinking the coffee black, I worried that I’d hate everything, no matter the high quality of the roast. But I kept my mouth shut, and soldiered on.

We used spoons to remove the crust, and the coffee underneath was ready to enjoy. Coffee tastings are similar to wine tastings, in that we were encouraged to breathe in each brew’s aroma before tasting.

We were also encouraged to spit the coffee out, instead of drinking. At wine and whisky tastings, I never do this; I always drink what I’m tasting. But I happily spit it out; since I didn’t particularly care for the taste (at first), this was preferable anyway. But as the tasting continued, I began to get used to the stronger, richer flavor of the brews. What I first (secretly) thought tasted “like dirt,” transformed to “earthy” with recurrent samplings. What I considered “acidic,” soon progressed to “bitter,” which isn’t a bad thing. “Too strong” or “sharp” became “rich,” “robust,” and “bold.”

At Mark’s encouragement, I began blending strong, bold roasts (Ethiopia) with more mild ones (Sumatra). This blend creates what we know as Mocha Java. It was a revelation. I never would have believed that I could enjoy a cup of coffee without first making it sweet and creamy.

After our tasting, Mark and John generously offered all of us a half pound of coffee on the house. After considering their Columbian coconut, I chose their Ethiopian Harar. It’s a strong, bold roast whose aroma has a hint of berries. It was my favorite of all of the selections.

I still sometimes drink coffee with milk and sugar, but no longer every time, and never when a locally brewed cup has been freshly pressed for me. I think for my next adventure, I’m going to try a beer that isn’t a lager and see how that goes. ~~Tracy Nectoux

This was, hands down, the coolest field trip I’ve been on since the 2nd grade. Not only because of the quality of the coffee (more in a second), but above all because of the quality of our hosts. A great docent or tour guide can transform an experience into something grander, revealing a crack in the tedium and colorness through which is viewed the world and its humans in their marvelous strangeness.

You should ask for a tour.

I walked out with a bag of their high-grade Brazilian. I prepared it, like I do all my coffee, via a single cup pourover with my Hario.

It ranks among the best cups of coffee I’ve ever made. ~~ Robert Hirschfeld