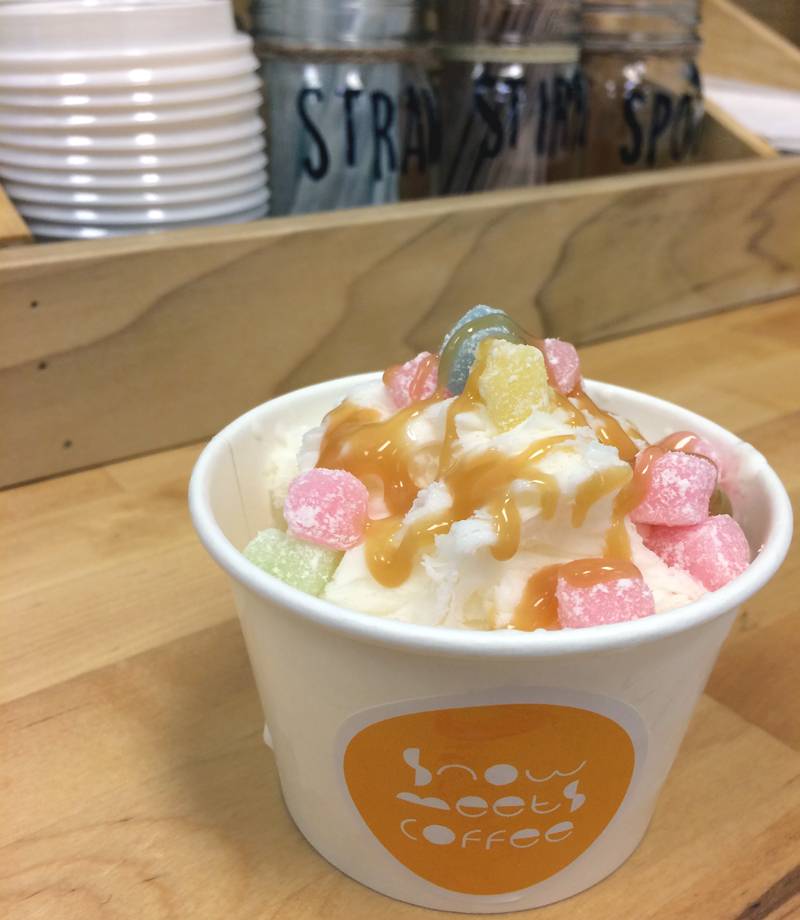 Downtown Champaign has gone crazy for new restaurants this year, and it has been hard to keep up. The other day a friend casually mentioned that there was a new café as well, in the spot where the record shop was on Main Street, and it really stressed me out. A new café? We already have Kopi and Aroma and Pekara and Cream & Flutter. Aren’t we, like, set? But as I soon discovered, this particular new café, Snow Meets Coffee, is bringing coffee and a tasty shaved ice dessert called snow bing to Downtown Champaign. Bubble tea, too, but that would have clunked up the name. And despite my initial anxieties, I can report that Snow Meets Coffee is pretty great.

The News-Gazette recently ran an article about Snow Meets Coffee, and I can summarize the facts for you here: opened by 28-year-old Kyo Jung, an Urbana resident, Snow Meets Coffee is conceptually more of an ice cream shop, though they offer a full menu of handcrafted coffee beverages. While Jung is from South Korea, the ice cream at Snow Meets Coffee, called snow bing, is based on a Taiwanese shaved ice treat.

For the uninitiated, the texture of snow bing is like soft fallen snow. But rather than ice pellets or tiny balls, it’s more like diaphanous sheets of ice cream. Like phyllo dough made of ice cream. It’s extremely light, and it does feel a bit disconcerting when you’ve just forked over five bucks (not including tax and tip) for what feels like a cup of air. Some will prefer ice cream desserts with more density, but most can and will appreciate the sublime lightness of snow bing. The menu walks you through a four-part order for your snow bing: pick a size, pick a snow flavor, pick some toppings, pick a “drizzle” to go over the top. You cannot sample flavors before you buy. It will take a while for the baristas to prepare your order, so after you pay you should grab a seat and chill.

above photos by Jessica Hammie

Here are some flavor combinations I’ve tried, along with my thoughts:

Mango snow + kiwi topping + condensed milk drizzle: Delicious. The mango flavor is the only snow flavor that is not milk-based, just FYI.

Original milk snow + rainbow mochi topping + caramel drizzle: This flavor is different from the vanilla snow flavor, if subtly. The mochi added delightful chewy texture, and the caramel balanced it all out.

I could not motivate myself to branch out from the condensed milk drizzle, because it was so good. Honestly, you really can’t go wrong — any of the flavors with any of the toppings would be great. I still really want to try the black sesame flavor. If one of you has a chance to try it, let me/us know what it’s like!

They do have regular coffee at Snow Meets Coffee, and the beans are from Toby’s Estate roastery in Brooklyn. However, because the shop has a dessert-y vibe I found myself ordering more decadent coffee beverages when I visited. I tried an iced caramel cappuccino (on accident — I’ll explain), a caramel mocha, and a regular cappuccino. The caramel mocha was great, with a pleasant bitter depth that grounded the sticky-sweet chocolate and caramel. It came out all nicely done up with various powders and drizzles over its foamy top. It was harder to appreciate the nuances of the plain cappuccino in this sugary context, but my sugar-averse friend assures me that it was great, too.

Because there are so many components to each order, larger orders can become complicated and time-consuming. On one recent visit I came in with three friends and each of us ordered snow bing and a beverage. I ordered a hot caramel cappuccino, but due to a mix-up it came out as an iced caramel latte with hot milk foam floating on the top. Yes, that’s technically an iced cappuccino, but in my opinion iced cappuccinos are confusing and pointless and should not exist. It was not a big deal, and I was more intrigued that they a) thought I actually wanted an iced beverage with hot foam on the top and didn’t laugh, and b) made it so perfectly. It was an exquisite rendition of an ill-conceived beverage that I did not actually order. I was charmed by the effort. We also ordered a bubble tea, but after waiting twenty minutes we realized it had been forgotten. After I politely reminded the baristas about the order, they said they didn’t realize that the drink had even been ordered (it ended up not being on the receipt), and were out of tapioca balls anyway. They did offer us a free iced milky tea for our trouble, though. The Thai tea flavor is awesome, and likely even more so with tapioca balls. All of this is just to say that the drinks are very tasty, but you should communicate carefully if you’re placing a large order.

All in all, would I recommend Snow Meets Coffee? Yes. Rather selfishly, I like it because it’s very close to my house. It is expensive, but if you’re already used to the prices at Cocomero or Cream & Flutter, this isn’t a stretch. It takes a while to get your order, but it’s a charming place and worth the wait. The snow bing is as light as it is sweet, and memorably creamy. Bonus points if you go on a day when the weather matches what’s in your cup.

Located at 1 E Main Street in Suite 108, Snow Meets Coffee is currently open from around 1-9 p.m., though their regular hours appear to be 8 a.m.-10 p.m., according to their website. At this point, it’s not yet clear what their regular hours will be after their grand opening.