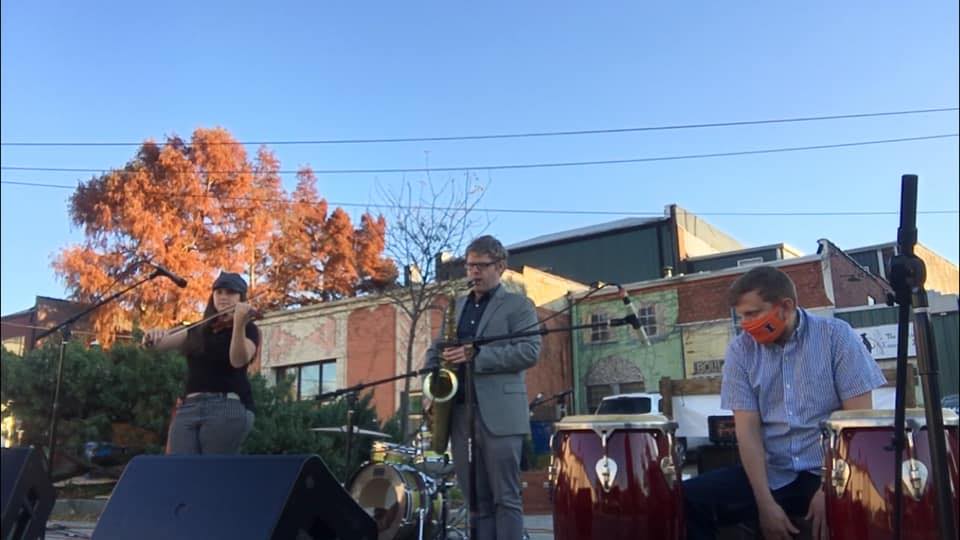 When I first heard about the Fiddle Sax Fusion Band, I was instantly very intrigued. For those who aren’t aware, the band is made up of, you guessed it, fiddle and saxophone. The group was created by husband and wife duo Brian Stark (saxophone) and Jessie Stark (fiddle) in the midst of the COVID-19 pandemic. With venues and concert halls no longer hosting shows, the two formed Fiddle-Sax Fusion Band (hereafter referred to as FSF) and hosted shows outdoors for their neighborhood. Soon they were joined by their neighbor, percussionist Stephen Busath, and the group eventually began playing shows around town.

The idea of fiddle and saxophone together baffled me to some degree. I couldn’t really imagine the two fitting together. I played in jazz band in high school, as well as orchestra, but never did the two mingle together. So when Brian Stark reached out and offered to let me take a listen to FSF’s new album Grumbling, Growling, and Other Pandemic Breakdowns, I jumped on the opportunity to hear what this project was all about.

The album opens with “Faded Love,” a danceable traditional tune by Bob Wills. Jessie Stark’s fiddle playing is beautiful, with some wonderful double stops, as well as freely sliding into notes with ease. Saxophone and percussion quickly join in, and the trio takes off and creates such a unique and exciting sound. Brian Stark brings his jazz background to this track it feels like, throwing in some half steps and blues licks, while Busath lays down a light rhythm in the background.

To me, one of the indicators of great musicians is that they know how to play with dynamics. The volume of these tunes wax and wane beautifully. I love “Cooley’s Reel” which grows pretty drastically in sound while a galloping rhythm drives the track, allowing the Starks to play around and bring the track to a high point.

The album also does a great job of giving you a dynamic track placement, knowing when to give the listener a quieter moment after a more exciting track. Like the track “Africa,” a more laid back track, sandwiched in between “Whiskey Before Breakfast” — one of my favorites — and “Cooley’s Reel.” Another track, “When I Survey,” has a very subtle, soft opening before Brian Stark takes the second half and plays a beautiful solo. What I love about this track is how the excitement grows and there’s a release in the second half, but it never feels too chaotic – there’s still this contained energy, but yet feels so expressive at the same time. I don’t know if that makes any sense, but take a listen and you’ll see what I mean.

There’s also the album closer “Rock of Ages,” which has very subtle percussion, allowing fiddle and sax to shine and slowly push the track into an emotional climax. This track is a great example of the trio’s abilities, and how you don’t need to overdo it with instrumentation and fancy embellishment to make a track interesting. It’s incredibly impressive what the group is able to pull off with just a fiddle, saxophone, and percussion. Each tune has its own unique personality and style, and the trio manages to keep us entertained with their instrumental proficiency.

One of the most exciting aspects of the record is the interplay between the fiddle and sax and their ability to play off of each other, in a sort of call and response way. Jessie Stark’s fiddle playing is stunning, pulling off different styles of fiddle tunes from Irish jigs to sea shanties, to Canadian fiddle tunes with ease. Brian Stark’s saxophone perfectly compliments the fiddle, often laying down a base for the fiddle to explore, before swapping, allowing saxophone to have its moment to wail. Stephen Busath provides some great percussion work as well, driving a lot of these songs while adding bits of color and light when needed.

I’m not usually one to seek out fiddle tunes to listen to in my free time, but this record pleasantly took me by surprise. It’s a great blend of fiddle tunes from all over, perfectly executed by this trio of talented musicians who play with ease and expression. As exciting as listening to the record is, I have no doubt that the live shows are even more exciting, as a lot of these tunes are meant to have accompanying dance. Grumbling, Growling, and Other Pandemic Breakdowns is a perfect showcase of Fiddle Sax Fusion’s musical ability and the beauty of the record is that listening to this will leave you like you just ate a good meal — satisfied but wanting more. Never would I have considered that these two instruments would mesh so well, but damn, they do.

Currently, the record is only available physically at the band’s shows, but I’m sure if you reached out to the band, they would sell you a copy. You can find Fiddle Sax Fusion Band on Facebook or on Instagram.